Putting a seal on it 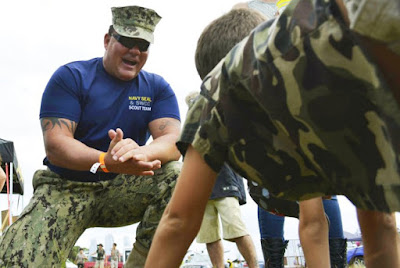 An American tourist tells me that a US Navy Seal is not an animal with flippers that makes unpleasant barking noises. Apparently, the Seals are daredevil commandos who visit remote locations to confront bad guys in need of assassination. I use the computer at the safari guesthouse to confirm this description is essentially correct. However, the Seals are considerably more versatile than the American public imagines them to be. A few minutes of judicious googling leads me to an article about Chief Special Warfare Officer Joseph Schmidt III, who is rumoured to have starred in lesbian-themed movies such as ‘Strippers Come Home Horny from the Club’ and ‘Apple Smashing Lap Dance’.

“He was always pretty open about it with the command. I mean, honestly, all of his buddies knew about it. He got called in and they said, ‘Look, keep it on the low, don’t mention the SEAL name and blah, blah, blah.’ “

But now that the lid has blown off, the Seals have launched an investigation into what Officer Schmidt has been doing under their noses:

“There are prohibitions on behaviour that is discrediting to the service,” explained Captain Jason Salata, a spokesman for the Seals.”

“Oh, you poor innocent ape!” he sighs, shaking his head sadly. “All the best ones have men in starring roles.”

He then gives me a brief lecture on the topic, describing the following parts that male actors have played:

• the loyal slave who performs various tasks for his lesbian mistress, which may include keeping her toys in serviceable condition;

• the Peeping Tom who furtively watches lesbians until he is discovered and punished for his voyeurism;

Call me an old-fashioned ape, but I don’t think any of the roles described above are compatible with the ethos of an elite fighting unit. A man in military service can’t appear to be pussy-whipped by lesbians. The enemy might think he was a coward whose finger would tremble on the trigger. If I were in the Seals High Command, I would require Officer Schmidt to submit the scripts of the movies he is offered a role in, and forbid him from accepting any part where lesbians bully him into submission. Artistic freedom is a wonderful thing, but you’ve got to draw the line somewhere. 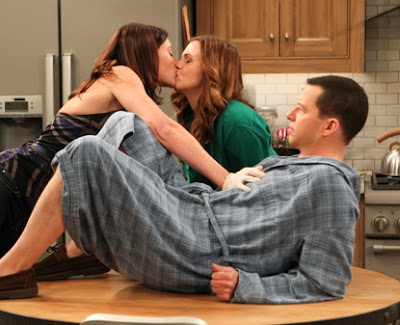 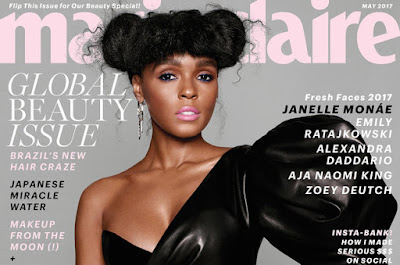 I’m sorry to say I received no Easter gift from the manager of the safari camp. He’s getting very stingy in his old age. However, his kind and generous wife lent me an issue of Marie Claire to read, for which I thanked her profusely. If you think it’s strange that a gorilla should receive a woman’s magazine with gratitude, you have a very limited view of what we find interesting. Marie Claire (and publications like it) is a window on the mind of the human female, which is one of the unfathomable mysteries of anthropological science. No learned ape would refrain from immersing himself in such literature.

As I thumbed through the magazine in my hammock, I came across an interview with a young lady called Janelle Monae (pictured above). Although I’d never heard of her, I assumed she must be someone important, otherwise why would Marie Claire be interviewing her? Ms Monae seems to be a pop musician with an interest in social and political issues. One of her statements immediately caught my eye:

“People have to start respecting the vagina,” she declared.

I can’t see why anyone (apart from the usual villains) would fail to comply with this entirely reasonable demand. I have always respected the vagina, and would not hesitate to admonish any fool who took its name in vain. The coochie is the hallowed portal from which we mammals emerge into the realm of breathable air. Her next statement was far less impressive:

“Until every man is fighting for our rights, we should consider stopping having sex.”

This makes no sense. If men fought for the rights of women, there’d be no one to fight against. It would be like a boxing match where both fighters were on the same team and beat up the referee. Women, of course, should fight for their own rights, with a few grumpy men resisting them to make the contest interesting.

As for the sex strike threat, that would be like cutting off your pigtails to spite your wig. The only people who’d benefit would be the sex toy manufacturers. I don’t for one minute believe that such a strike could ever be solid. Hordes of strikebreaking hoochies would sneak around having sex with men on the quiet. And what about all the gay men? They would not be harmed by the strike at all. They would go on shagging each other while making catty remarks about all the sex-starved women. The defeated and dejected strikers would return to work with their tails between their legs.

I don’t want to be too hard on Ms Monae for making these foolish proposals – she obviously hadn’t thought too hard before formulating them. I would advise her to hire an aide to carefully vet her policy ideas and throw out the stupid ones. In the meantime, she should continue having sexual relations with men who tickle her fancy. No one ever made their mark on the world by being sexually frustrated. 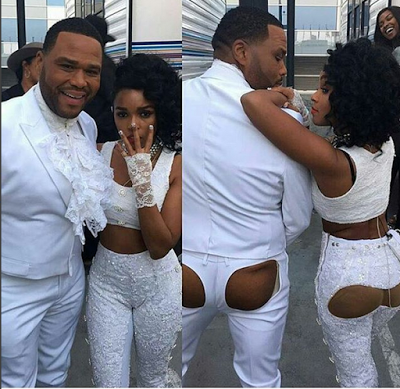 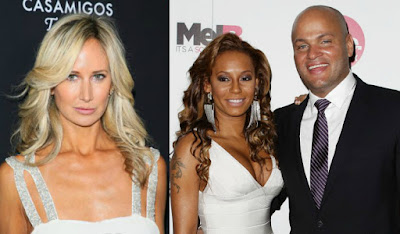 As a chivalrous ape, I feel moved to defend Lady Victoria Hervey (pictured above left) from the cruel mockery of the mob. She is reportedly “mortified” about the existence of a secretly filmed sex video in which she is ravished by Mel B and her oafish husband. She fears that the video will be used as evidence in on-going divorce proceedings between Mel B and her husband (although I can’t for the life of me see why).

Nevertheless, the crass and lumpen elements of the on-line media have jeered at her apprehensions, declaring that she who cavorts with the Scary Spices deserves her fate. Their logic is defective, to put it mildly. Consenting to a threesome with a married couple does not give them the right to make it public knowledge, far less secretly film the event for later disclosure. The lack of sympathy for Lady Victoria cannot be unconnected with her aristocratic status. One gets the impression that those who are currently lampooning her would have hooted and cheered as the blade of the guillotine descended on poor Marie Antoinette.

A further mitigating point is that Lady Victoria was apparently the victim of a wily entrapment, quite unaware of anyone’s intentions until the last second. Here is an account of what happened given by a close friend:

“It was all a blur and everyone was very drunk. She told me one minute they were laying in bed watching a movie together, then they got carried away and Stephen was on top of her and Mel was kissing her. Next thing she can remember they all woke up naked in bed in the morning.”

This description suggests what occurred was in a grey zone between aggressive seduction and date rape. Mel B should hang her head in shame for using her celebrity status to lure Lady Victoria onto the marital bed, slyly waiting for the opportunity to force kisses on her stupefied lips, making her flesh putty in the hands of her predatory husband. It’s the sort of behaviour that gives pop stars a bad name.

Thus far, I have offered no opinion on the practice of three-in-a-bed romps. It’s not my business to approve or disapprove of human mating practices. My old circus buddy, Smacker Ramrod, told me he regretted the one occasion on which he participated in a fleshy entanglement with two women. It ended in farce when his bedmates clashed heads after simultaneously attempting the same manoeuvre. Regrettably, he could not suppress his laughter at their slapstick mishap, which totally ruined the mood. The last thing women who have butted heads want to hear is the guffawing of the man they were trying to oblige.

One would hate to think that Lady Victoria suffered the additional trauma of butting heads with Mel B. Hopefully she avoided that misfortune by adopting a passive role. Sometimes the safest course of action for a lady is to lie on her back and let other people do the work. 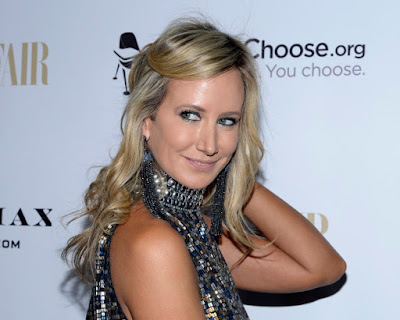 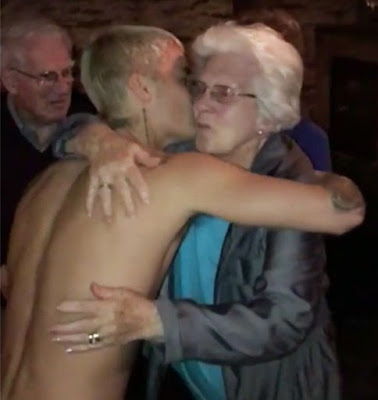 You may find this hard to believe, but I’d quite forgotten Justin Bieber existed until last week, when someone sent me a picture of him being fondled by an elderly lady (see above). Living in the jungle means that human celebrities flit in and out of my consciousness like fruit flies. Admittedly, Bieber makes louder and more irritating buzzing noises than the rest of the swarm, but this is the first time I’ve thought about him since the end of the last rainy season.

What are we to make of a grey-haired woman laying hands on Bieber’s naked torso? If Bieber were an ape, no one would raise an eyebrow, because older females are more desirable in our society. Although some of Bieber’s antics remind me of a recalcitrant chimpanzee, it’s unlikely he knows anything about their mating habits. Perhaps a dormant gene from the homo erectus era was activated by his use of narcotics.

I hope Bieber also took the precaution of partying with the girls in a pitch-black dark room, with only a small torch in his possession to help him locate the choice body parts. It’s possible, of course, that an audacious strumpet might have tried to seize the torch so she could inspect Bieber. A bodyguard would have to be present to discourage such effrontery and eject potential transgressors. Any woman who consorts with Bieber must understand that grabbing his torch is a breach of protocol that won’t be tolerated.

Another piece of news about Bieber concerns a lawsuit in which he was successfully sued for throwing an egg at his neighbour. It seems his avaricious neighbour was not satisfied with the damages of $90,000 he received and is now demanding more cash. I have to admit being on Bieber’s side in this particular dispute. Throwing eggs at people is impious behaviour, but the victim forfeits the moral high ground if he acts like a money-grubbing shyster.

In truth, cash is no compensation for an affront to one’s dignity. If the neighbour had truly felt the insult as keenly as he claims, he should have challenged Bieber to a duel. If Bieber ever throws an egg at me, I will not demand a cent. Nor will I challenge him to a duel (an obvious mismatch). Instead, I will inform Bieber’s lawyer that his client can make amends by spending an hour of quality time with a couple of female gorillas. Yes, it’s true – there are female gorillas who adore the little squirt! 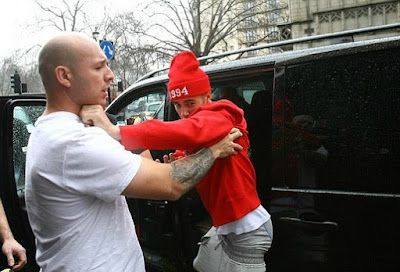