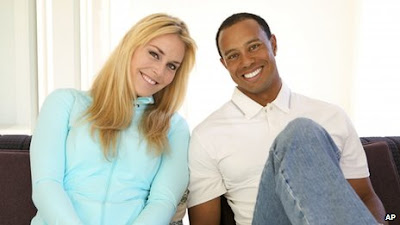 So Tiger Woods has announced he is “dating” Lindsey Vonn, the all-American skiing champion. Is it my imagination, or does she resemble every other woman Tiger has charmed with his swishing club shaft? If I were Tiger’s agent, I would have urged him to go out with a transitional brunette just to prove he isn’t colour-prejudiced. I wouldn’t have advised him to date a black woman, of course – a suggestion so outlandish might have caused him to choke on his tongue, which wouldn’t have helped his accuracy with the driver.

As a gorilla, I don’t see why men find blond women so alluring. Admittedly they do look the part in Scandinavia, where they blend into the Nordic landscape like artic foxes. But I always find it damnably difficult to tell their faces apart when they congregate in large numbers. I wonder if Hef has name badges for the playmates in the mansion, so he can keep track of whose turn it is to knead his leathery buttocks. Maybe he doesn’t particularly care and lets the girls draw straws.

Now a few blond women do stand out from the crowd. Scarlett Johansson is one and Angela Merkel is another. They complement their strengths and weaknesses so perfectly that they ought to be a double-act. As the gene for human blondness is a relatively recent mutation, they must have a common prehistoric ancestor who was the Mother of all blondes (Moab). The alpha males of that epoch must have fought for the privilege of mating with her, while the alpha females no doubt pulled her hair and made bitchy remarks about peroxide. Being the first of a new strain is never easy.

Yet in truth, I find red-haired humans more interesting than blondes. The genetic mutation that gave rise to their condition is a very ancient one, shared by our orang-utan cousins. It is said to be associated with extrovert behaviour and a healthy libido, which is why you should always expect the unexpected from a redhead.

Take Cynthia Nixon, the actress who portrayed Miranda in Sex and the City. There she was playing happy families with her husband and two children, when quite out-of-the-blue she ran off with another woman and joined the tuppence-licking sorority. Her conduct reminded me of Clyde, the mercurial orang-utan in Every Which Way But Loose, who would stick out his arm without warning to punch people in the face.

Who is the world’s leading redhead? I would give the title to Julia Gillard, the prime minister of Australia. A lot of people find her accent unbearable, but I think it makes her sound like a school mistress addressing the roughnecks and bushwhackers in their own barbarous dialect. There is no doubt that millions of men have sexual fantasies about her, and are frustratedly searching for pornographic images to indulge their obsession. If she retired from politics today, she could easily earn $500 an hour as an escort, which is a more honourable way of making a living than giving paid speeches to assemblies of toadies. 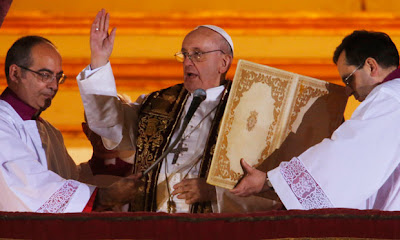 I’m thinking of sending a condolence note to Mario the bum-pincher, my old circus buddy. Like most of his countrymen he’d been hoping the new Pope would be Italian, which explains the collective gasp of disappointment in St Peter’s square when the result of the holy ballot was announced.

According to Mario, things were much better in medieval times when all the Popes were from Italy. Thanks to the good example set by these santi padri, no one made a fuss when priests had carnal relations with prostitutes, peasant girls and the occasional nun. As a result, the Catholic clergy attracted red-blooded men rather than the sodomites and paedophiles who now occupy its ranks.

“But didn’t the Popes kill people in those days?” I asked.

“Hey, you never heard of the Mafia?” retorted Mario.

He seemed to have a point, even though I wasn’t sure what it was.

Nevertheless, I think the new guy deserves a chance to prove himself. Argentina is a country full of big-balled men and Pope Franny looks as if he means business. He’s already made a good impression by paying for his hotel room instead of telling them to send the bill to God. And I like his idea of a new humble papacy based on home cooking, taking the bus to work and regular flagellation. Give the man a fair crack of the whip is what I say.

He is aged 76, though, which means he’s unlikely to last until the end of the Brazilian waxing era. Looking ahead, it’s as clear as daylight that the next High Pontiff should be a woman of striking appearance, who could wear the papal frock with dignity. How else will the Catholic Church compete with all the new age pagan faiths with their priestesses and witches? There's no point issuing papal bulls when the public want papal cows.

My preferred candidate for the job would be Tatyana Kozhevnikova, the Russian gymnast with the world’s strongest vagina. In a recent demonstration, she suspended a weight of 6 kg from a wooden egg clenched tightly inside her coochie. This vice-like grip is not a natural talent, but the outcome of years of training by squeezing spherical objects inside her snatch. She recommends this type of exercise for women who need to strengthen their intimate muscles for reasons other than weightlifting:

"It's enough to exercise your vagina five minutes a day, ladies, and in just one week you'll be able to give yourself and your man unforgettable pleasure in bed," she says.

Has a more persuasive sales pitch ever passed from a pair of human lips? If I were a woman, I wouldn’t hesitate to get with the pussy programme. What a motherly figure Tatyana would be at the Vatican, giving the faithful a safe place to put their Easter eggs. It’s the kind of sacrament that would make kissing the papal ring a forgotten relic of the past. 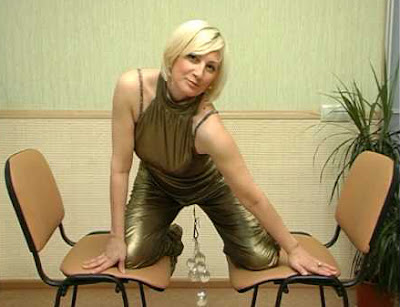 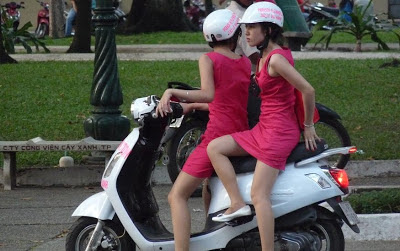 A female correspondent chides me for not denouncing an Indonesian town which has banned women from riding motorcycles.

“What’s the matter with you, Bananas?” she wrote in her missive. “I thought you were a champion of women’s rights – this happened back in January!”

“My dear lady,” I replied, “I am for the rights of all primates, be they male or female, hairy or hairless, human or inhuman. You can’t expect me to thump my chest whenever women are excluded from an ostentatious mode of transport. Why can’t they take the bus?”

On reading the relevant news report, I discovered that my feminist critic had been exaggerating. The women of that town (with the aptly improbable name of Lhokseumawe) can still travel on motorbikes and scooters, as long as they ride side-saddle rather than straddling them.

"It is to maintain women's dignity and good image," said a town spokesman.

Of course, if riding a motorcycle does arouse the lady-parts it ought to be banned in the name of road safety. You can't expect a woman who's writhing in ecstasy to keep her eyes on the road and her hands on the handlebars. It’s only a matter of time before someone’s boot gets rammed.

To get an informed opinion, I consulted my friend Bobbi Hatch, who has ridden a ’65 Panhead for many years. She assured me that neither she nor her sisters in the San Francisco ‘Dykes on Bikes’ society had ever climaxed on her crotch rocket:

“Our bikes are our buddies not our whores,” she explained. “Any woman who got herself off in that way would be suffering from the female equivalent of premature ejaculation.”

I consider her statement to be authoritative. The women in the Indonesian town are clearly the victims of an ignorant and despotic patriarchy. May they prevail in their struggle against oppression.

Having done my duty by condemning this iniquity, I don’t intend to give it further publicity. In truth, I don’t like motorbikes, which are noisy, vulgar machines favoured by the brash elements of human society. I’ve always thought the most civilised method of conveyance for a lady is the sedan chair. She has her own private compartment where she can polish her nails, powder her nose, and be perfectly adorned for her appointment.

Would it be possible to find porters in this day and age? I believe so. The human gaols are full of burly brutes who would jump of the chance of fresh air and exercise in a haulier chain gang. Just picture the spectacle of a page boy shouting “Make way for Lady Gaga’s litter!” as the diva was whisked off to her weekly therapy session. Pure pageantry, I tell you! 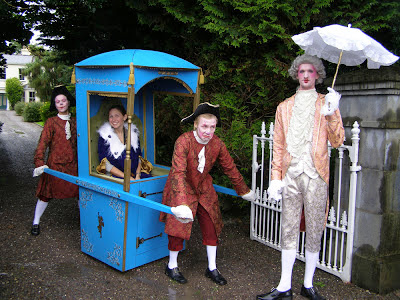 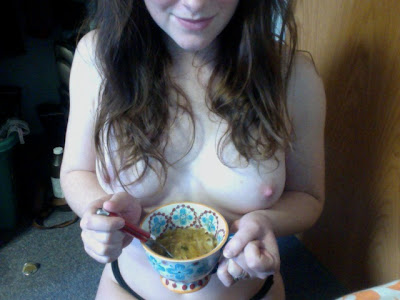 We’d be honoured if you had a look at our blog and introduced it to your readers. It’s called Naked Vegan Cooking and we think a natural-living ape like you will like it. :)  Drop in for dinner if you’re ever in Manchester and we’ll give you some gorilla-friendly dishes to eat!

So I visited their blog and found a number of food photos where the only meat on display was human. The picture shown above was one of the more tasteful ones and I’m not referring to the cooking. The following description appears in the ‘About’ page:

Naked Vegan Cooking is a blog full of delicious, easy to cook vegan recipes and beautiful, naked bodies and not an airbrush in sight. We believe in tasty food and positive body image.

A worthy mission statement, to be sure, but I cannot give the blog my unqualified endorsement. Although we gorillas shun meat, veganism is a step too far. There’s nothing wrong with eating eggs – by reducing the number of hungry chicks it preserves the balance of Nature. Far-sighted birds like chickens realise this. Only stupid ones like ostriches will peck the fur off your arse for stealing them.

Human nakedness is also something I’m ambivalent about. On the plus side, it keeps the sweaty regions of the human body well ventilated. The downside is that bare skin is a tempting target for mosquitoes and other blood-sucking varmints. I recently got an email from Katy Perry’s agent, asking whether she could spend some quality naked time with my tribe. I told him it could be arranged, but she’d have to let us smear her body with natural jungle ointments. We’re still negotiating the details.

The other problem with nudity is all too evident from the Naked Vegan blog – a lot of humans look better with their clothes on. It’s all very well talking about “positive body image” and such, but there comes a point when the gulf between image and reality makes it an exercise in self-delusion. Humans who want their bodies to be admired should expend the required effort in flesh-firming activities. A species designed for the hunter-gatherer lifestyle doesn’t get into shape by sitting on its butt eating Ritz crackers.

The dangers of body narcissism were aptly illustrated by a recent incident in a hotel. A naked man accidentally locked himself out of his room while putting some plates outside his door. Why he chose to perform this task in the nude is a mystery, but I suspect he was fishing for compliments from passers-by. He soon realised he wasn’t as beautiful as he thought when some guests ignored him. Eventually, he had to skulk down to reception with a plate over his groin.

In the light of this man’s misadventure, I offer a stark warning to the Naked Vegan bloggers: However many followers you acquire, the great mass of humanity will not give you admiring glances when you prance about naked. You won’t stop them eating eggs either. Never forget that your niche is anomalous. 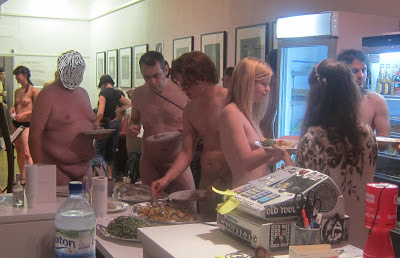