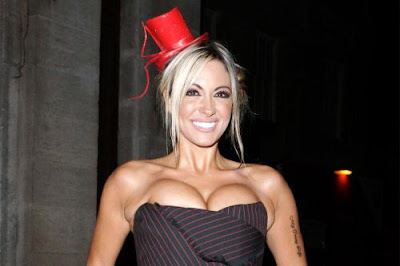 An English “glamour model” has taken the unusual step of banning men from her home:

“I honestly can't bear the thought of letting a man into my house ever again,” tweeted Jodie Marsh. “My house is too beautiful & clean & perfect ... I'm not saying men are untidy or dirty or smelly or unhygienic. Just that in my experience ... well, you know ... Men are like elephants. I appreciate their beauty and I like looking at them but I don't want to own one and I don't want one in my house.”

Given that Ms Marsh has made a handsome living from posing topless in “lads’ magazines”, her tweets may be unhelpful in furthering her career plans. Those who have stared ravenously at her jahoobies don’t want to be told that they’re smelly vagabonds by the owner of the said jahoobies. Publicly banning them from her home may also be counterproductive. They surely never expected to be invited, but now they can’t even fantasize about the possibility.

My mentor, Dr Whipsnade, didn’t allow tramps or vagrants into his impressive mansion, but he never announced it as a policy. If they turned up at his door, they were directed to the garden shed and told to wait for provisions. If you own a big, impressive house, you mustn’t insult the masses by telling them it’s strictly off-limits. That kind of behaviour can provoke a brick through the window. Even the Queen of England invites common folk to her garden parties, serving them an excellent buffet of teacakes and desserts.

So why has Ms Marsh acquired such an aversion to the opposite sex? Part of the reason might be the marriage she is currently in the final stages of dissolving. Her estranged husband was reputedly a man of lowly character with body odour issues. Having a mate who smells bad can put anyone off sex. Ms Marsh expounded on the delights of celibacy in an earlier TV interview conducted in her home:

“I'm celibate again now, because I just like it. I don't want any willies near me. I'm just nothing, I'm asexual.”

When asked about self-love, she said that was a different story and told the interviewer not to rummage in her drawers.

“Because you've got all the implements!” he exclaimed.

I think we can take it as read that the toys in her drawers are giving full satisfaction. If I were her agent, I’d negotiate an endorsement deal on her behalf. Having a nude model say that your device is so effective that she doesn’t need men is a manufacturer’s dream. 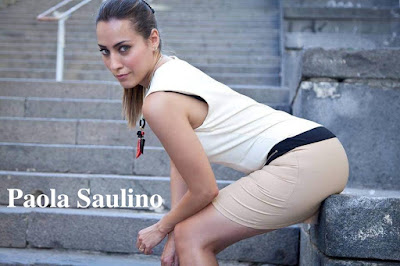 I’m trying to get in touch will Paola Saulino, an Italian actress currently traversing her country on a prize-giving tour. Ms Saulino (pictured above), promised to perform oral sex on any man who voted “no” in a recent national referendum. This is what she wrote on her Facebook page:

“I will practice oral sex with due and careful craftsmanship, thus fulfilling my duty, without losing even a drop of your essence, strictly looking at you in the eye. All this to those who will vote no in the referendum.”

“First step of pompatour is gone, “ she wrote after leaving Rome. “A little bit tired but everything is ok.”

Who can blame her? Although only 51 men claimed their reward in Rome, that’s more pro-bono work than most lawyers do in a year. I hope she’s getting advice from a competent throat specialist on the best kind of mouthwash to use.

Maybe she’ll recoup her expenses by writing a book about the pompatour when it’s over. It isn’t everyday that a woman tastes the semen of so many different men. There could be interesting regional differences between the southern coastal cities and the industrial centres of Milan and Turin. We might finally get some hard data on how garlic and olive oil affect the virile juices.

She should also acquire a broad knowledge of the ejaculatory exclamations uttered by her countrymen. I’ve often wondered whether Kevin Kline’s cross-eyed groan in A Fish Called Wanda was based on anything real. The character he played, Otto, was an American of Italian ancestry, so the nature-versus-nurture debate may be relevant. He also worked for the CIA. Who knows how that would affect a man’s climax?

So you must be wondering why I want to communicate with Ms Saulino at this delicate stage of her mission. It’s because the manager of the safari camp, contemptible villain that he is, has whispered his intention to visit Italy for the ignoble purpose you can guess. He’s been practising his Italian using an on-line tutorial so he can pass himself off as a naturalised citizen. Paola would be a fool to fall for such a trick, but he might get lucky, and that offends my sense of fair play. I want to give her a warning so she can send the manager packing with his bodily fluids un-siphoned.

My legal sources tell me that “soliciting oral sex through deception” is not actually a criminal offence in any known jurisdiction. Pretty incredible, don’t you think? I guess too many powerful men benefit from this legal loophole. 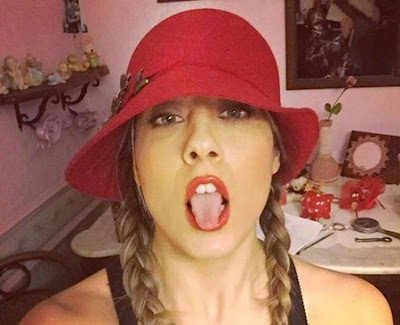 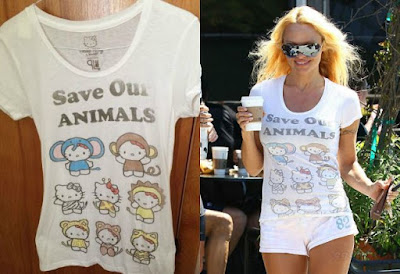 The manager of the safari camp is thrilled about the news that Pamela Anderson might make her home in Africa. This is what she told Hello! magazine:

“I’ve never been to Africa and I want to help elephants and rhinos so I could see myself living there.”

She didn’t elaborate on how her presence in Africa would help the elephants and rhinos, but such details can be worked out later. There is always work for the eager volunteer. If she spent enough time prancing about in the bush, I’m sure she would eventually distract a few poachers on the hunt for big game. The sight of Pamela in her swimsuit might cause them to fire prematurely, warning the elephants and rhinos to make good their escape. By such unorthodox methods will the wildlife of Africa be preserved.

On the other hand, maybe Pamela thinks she has more to contribute in the field of public relations. Everyone knows that the rhino is hunted for its horn, which is used as a quack remedy for impotence. A poster of Pamela stroking the horn of a live rhino with the caption “It feels so much better when it’s attached” would help to get the conservation message out. The only problem would be finding a live rhino willing to let her touch its horn. Given the belligerent disposition of these beasts, tranquiliser darts may be necessary. Pamela could take hers orally.

But if she does come to Africa, my hunch is that she would soon get bored of hanging out with the elephants and rhinos. Four-legged animals have many admirable abilities, but none of them are transferable to humans. If Pamela wants to acquire new skills, she should spend some quality time with her ape cousins. As well as teaching her how to climb trees, we could show her a few dance moves that haven’t yet made it to the discos and nightclubs of LA. Pamela has invested so much in her boobs that she may have forgotten what her butt cheeks are for.

She should also hobnob with her fellow humans, of course. She’ll be pleased to discover that big-breasted women have a higher status in Africa than in most other regions of the world. In the Mother Continent, big titties are seen as a source of nourishment rather than fun-bags for men to rub their faces in. Pamela would certainly have no problem in adopting orphans, although I’d advise her not to foster baby chimps. They have a reputation for being aggressive feeders and might rupture her implants.

The one thing Pamela will have to be wary of is the hot African sun, which could give her skin the texture of a warthog’s rump if she doesn’t protect it. I'd hate to see her turn into a nasty old crone. No doubt she will bring her own lotions, but I would advise her to use a natural jungle ointment that we gorillas can supply on demand. The best way of staying healthy in Africa is to go native. 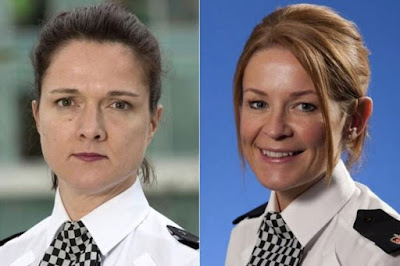 A British policewoman has been allowed to keep her job after exposing her breasts to a junior colleague. The peculiar circumstances of the case suggest it wasn’t an attempt at seduction, although I’m not entirely convinced there wasn’t a sexual motive. The adjudicating panel cited the exemplary service record of Assistant Chief Constable Rebekah Sutcliffe in justifying their decision, but I doubt they would have been so lenient if her breasts had been offered as face cushions. There are some things you can’t get away with in the British police force.

What drove Ms Sutcliffe, aged 47, to bare her bosom? It happened after she learnt that a rookie policewoman under her command had received breast implants. For some reason, Ms Sutcliffe found this infuriating, and resolved to give the melon-chested upstart a piece of her mind. She told her that a policewoman with surgically enhanced titties had zero credibility and no prospects for career advancement. Not content with mere words, she then exposed her own chest, saying:

“Look at these, look at these – these are the breasts of someone who has had three children. They are ugly but I don’t feel the need to pump myself full of silicone to get self-esteem.”

It goes without saying that one does not expect such theatrical displays from British policewomen, unless they are on holiday, on a hen night, or totally pissed. This is why I am inclined to believe it was indicative of a subconscious sexual desire. Describing her own breasts as ugly suggests a fetish for humiliation often found in humans of high authority. Or maybe she was just fishing for compliments. Imagine what would have happened if the young policewoman had responded to Ms Sutcliffe’s outburst by saying:

“Your tits aren’t ugly, they’re delicious, and I want to have them for breakfast and lunch.”

Irrespective of the decision to let her off with a reprimand, I doubt Ms Sutcliffe has much of a future in the police force. Ironically, it is her own career that has now been fatally damaged. A policewoman with breast implants might eventually be accepted as a dedicated public servant, but a policewoman who has exposed her own breasts is permanently branded as a figure of ridicule. If she doesn’t want to be a porn star, I think she has to find some other media career. A woman who has boasted about the ugliness of her boobs is likely to attract a lot of curiosity and potentially many fans. If she exploits her fame to the fullest degree, I have a feeling that ugly could become the new beautiful. 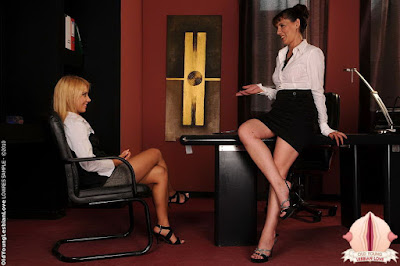