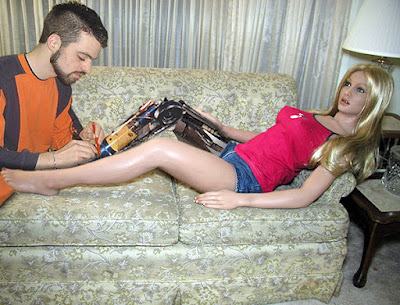 A Californian company called RealDoll has announced it will be selling an artificially intelligent sex doll next year. If they’d put it on the market a month ago, I would have bought for the manager of the safari camp as a Christmas gift. His wife isn’t the jealous type and might have appreciated sharing her conjugal duties with a robot. If nothing else, it would have given her time to catch up on her bedtime reading.

RealDoll haven’t said what their AI-enhanced sex doll will be capable of doing. It’s not difficult to imagine what functions the typical customer would want, but I suspect these early models will be fairly limited. Maybe the dolls will just moan and wiggle their tongues. Mind you, that’s probably more than many human partners provide. Hef’s playmates have surely mastered the art of playing possum, with the aid of a sedative if necessary.

A bunch of academics recently held a conference in London to discuss the way ahead for human-robot couplings. One of the speakers was Dr David Levy, the author of a seminal work called Love and Sex with Robots, published in 2007. Maybe I should have read it before writing this post. On the other hand, it might have given me the yips. A highbrow British periodical described the book as follows:

David Levy's thesis, in this utterly fascinating, scholarly and rather uncomfortable book, is essentially that we'll fuck anything (which we knew), and that we love pretty much anything that looks as though it might love us; or, at least, is blank and malleable enough for us to project that idea upon.

Yet almost 10 years after publication, Dr Levy’s idyllic vision of tireless and technically proficient sex machines is a long way from fruition. At the end of the conference, a member of the audience summed up the current state of play:

This is the problem with most advances in technology – the big breakthroughs happen in unexpected places rather than where everyone wants them to. There’ll be intelligent kitchen appliances long before sex robots are a common bedroom accessory. Refrigerators will make sarcastic remarks when men fill them up with six packs. Washing machines will scold women who sit on them during the spin cycle. Once machines have intelligence, there’ll be no end of cheek from them.

I personally doubt that androids will ever possess the sexual characteristics of a biological entity. Living flesh has a certain texture that cannot be replicated by inorganic substances. The human butt cheeks, when spanked, emit a noise that is instantly recognisable and probably unique in the solar system. Instead of trying to make artificial humans, the sex toy industry should think about creating a device like the Orgasmatron. It was all action and no talk, which is want people want from machines. 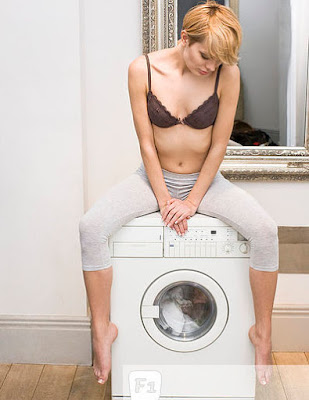 Getting her rocks off 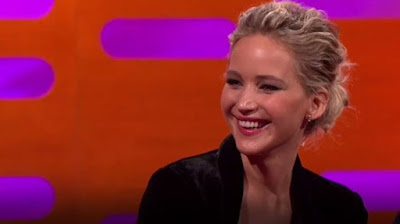 Jennifer Lawrence has apologised to the people of Hawaii for posting a disrespectful story about their holy rocks. According to Jennifer, she felt a tremendous itch in her butt while filming near the rocks and couldn’t resist rubbing her rump against them. This loosened one of the stones, causing a minor avalanche that narrowly missed a member of the film crew. It was a serious incident, but Jennifer made light of it on Facebook:

“One rock that I was butt scratching on ended up coming loose, and it was a giant boulder and it rolled down this giant mountain and almost killed our sound guy. All the Hawaiians were like, 'Oh my God, it's the curse!' And I was sitting in the corner like, 'Haha! I'm your curse! I wedged it loose with my ass!’”

The Hawaiians are upset and they have my sympathy. I would not have hesitated to do as Jennifer did if my hairy behind was itching. This I cannot deny. The difference is that I would have performed a solemn ritual of penitence afterwards, thanking the rock for allowing me to assault it with my hindquarters. As a native of the Mother Continent, I know better than to mock sacred relics of the landscape, which generations of witch doctors and juju men have concocted spells to appease. Jennifer would be wise to make an offering to the spirits she has offended by her sacrilegious act.

There are a couple of issues arising from this incident that merit further discussion. To begin with, why was Jennifer’s butt so itchy? As a human female, her buttocks would be smooth and hairless, so not infested with the lice and other parasites we hairy apes must endure. Could she have been wearing some kind of lingerie that disagreed with her skin? If so, this would be another argument in favour of women dispensing with undergarments and allowing cool air to circulate around their nether regions. There’s no need for me to rehash the other reasons stated in earlier posts. The archives are linked for a reason.

The second question we must address is this: why didn’t Jennifer scratch her behind with her fingers instead of rubbing it against a rock like a grizzly bear? Most women have sharp enough fingernails to satisfy the itchiest of itches. Was she cowed by the out-dated human taboo against women scratching their butts in public? I never saw any women doing it in my circus days, so I assume they snuck off to a secluded place when they got the urge. Certainly the dwarves, who were all men, had no such inhibitions.

Given that we’re now well into the 21st century, it’s high time that an influential human female said: “Girls, It’s okay to scratch your behind if it’s itchy.” Who should make this long overdue declaration? Not Victoria Spice, whose bottom is too small. Nor Madonna, whom no one would take seriously. But if Taylor Swift said it, the whole world would sit up and take notice. 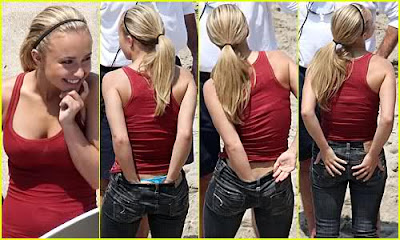 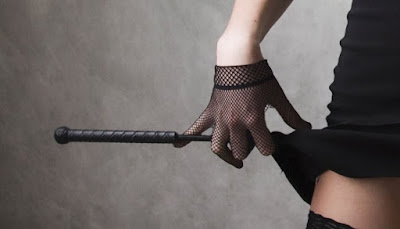 “We shouldn’t be forced to be having these conversations with our children at this age,” said Amelie Foster, a mother of two.

I see her point. One can easily imagine the awkward exchanges taking place.

Child: Mummy, who are all those men who visit Auntie Trixie’s house?

Mother: They’re naughty men who go to Auntie Trixie to be punished, darling. You mustn’t talk to them.

Child: Does Auntie Trixie make them sit on her naughty chair?

Child: Will Daddy go to Auntie Trixie when he’s naughty?

Mother: No, darling. Mummy gives him all the punishment he needs.

Are there dominatrices who fantasise about getting spanked themselves? This is a question that continues to intrigue me. I should imagine there must be a few. To spank a woman who spanks men for a living would be an act of imperious grandeur. The spanker would acquire prestige surpassing that of a Roman emperor. Few men would be worthy of this solemn and majestic duty. But a gorilla might be. 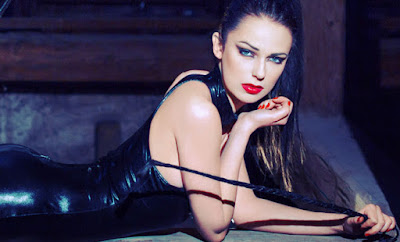 I received the following email from the Mistress of the now infamous house!

I kindly asking you to removed the photo of myself and my boyfriend house as legal action have taken against media on account of in breach of several laws. And even further steps against the neighbours after initial warning to neighbour for harassment and lies.

So kindly remove the photo. 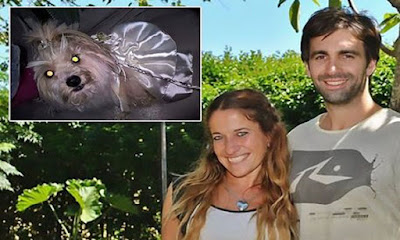 There are conflicting reports about the Argentinian woman who married her dog. Some say she did it because her fiancé jilted her; others say she did it because her fiancé cheated on her. You may think it’s an unimportant detail in this romantic tale, but I would beg to differ. If her fiancé’s philandering was the issue, who is to say that her dog won’t cheat on her too? Although dogs are normally very loyal to their owners, their concept of fidelity doesn’t stop them from humping other dogs. The behaviour of stray mutts in the shanties of Brazzaville suggests that love and sex are wholly separate categories for the canine community. As they are for many humans, of course.

Now it seems that Miss Romina Pitton’s main motive in this affair, apart from confirming her affections for her pooch, was to avoid cancelling a wedding in the final stages of preparation. With so much money already lavished on cakes and frilly dresses and gay wedding planners who charge by the hour, she didn’t want to deprive herself and her guests of the extravaganza they’d been eagerly anticipating. All of which shows how the human wedding has evolved, over the centuries, into a ridiculous circus. A simple exchange of vows has become the excuse for an absurd and overblown show with a giant cast of extras.

Personally, I can’t think of anything more undignified than participating in a human-style wedding. When Gorilla Bananas makes a promise to someone, there is no need for witnesses. His word is his bond. Potential voyeurs are told politely to sod off before any oaths are uttered. My solemn covenants are a private affair, not a gala event that the world and his wife may attend. Listening to an impertinent speech by the best man would be out of the question too. Any “best man” who attempted to mock me in front of an audience would immediately find himself demoted to “worst baboon”.

This explains why I’ve always had a soft spot for humans who elope. When a clown ran off with the ringmaster’s daughter in my circus days, I was quick to offer help with getaway vehicles, safe houses and disguises. Obviously I didn’t provide all these services myself. Like Frank Sinatra, I had underworld contacts who were only too willing carry out favours on my behalf. Most things can be arranged if you know the right people.

You may think that eloping has gone out of fashion and doesn’t happen anymore, but I have a suspicion that a big one is in the offing. Prince Harry seems to be very besotted with his latest girlfriend, to the extent that he’s issued a statement to the press, telling them to back off. I don’t think he’d want to expose her to the media scrutiny that a royal wedding would generate. If he and his would-be-bride are interested, I have a nice little hut in the Congo where they could consummate their nuptials in peace. 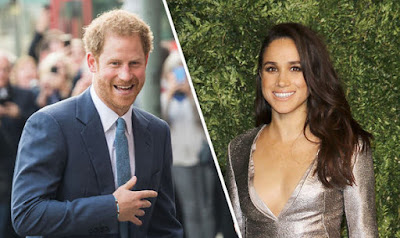