Susan Sarandon says that sex is keeping her young-looking, but how can she be sure? It might just as well be eating avocados or rubbing her face with Nivea moisturising cream. I suspect she made this statement because she wants everyone to know that she’s still getting it in spades at the age of 69. We should all be very happy for her, although her achievement is probably far from exceptional. The world is full of gigolos and poodle-fakers, ready to give an old woman a good seeing to for some pocket money and a trip to the circus. Ms Sarandon, no doubt, has her pick of the meatiest studs in the market.

Aware that her youthful appearance might have other causes, she later elaborated on her original suggestion:

“Laugh and have sex,” she advised her attentive fans.

I hope she’s not implying that she laughs during sex, which is a dangerous practice that even baboons try to avoid. I once saw a pair of bonobos guffaw while copulating and it gave them severe muscle spasms. For humans you’ve got the added problem that if one of the mating pair laughs, the other one will wonder what the devil is so funny. Such disruptive habits should not be endorsed by a famous actress.

Laughing at jokes or idiocies is a different matter, of course. It’s clearly a healthy pastime, but I’m not convinced it makes humans look younger than their age. The laughter lines on Mick Jagger’s face suggest the opposite, although there may be other reasons for him looking like a wrinkly old prune. Heaven only knows what evil substances he ingested during his long life of self-indulgence and debauchery. The funny faces he pulls while performing can’t have done him much good either.

But on the matter of sex, we have to recognise that different rules apply to men and women. It’s not something humans like to admit in this age of gender equality and transgender lavatorial rights, but Mother Nature is a harsh mistress who doesn’t give two figs and an apricot for political correctness.

For the male of the species, unlike the female of the species, the climax of the reproductive act involves draining the body of its vital fluids, which saps the entire organism of its vigour and vitality. After the wildebeest rut in the African Savannah, the females are ready to conceive and the males are read to drop dead. Any man who had serviced as many females in so short a time would find himself in a similar condition.

Warren Beatty is one of the few men who has matched the mating exploits of a dominant wildebeest buck, which makes him an interesting case study. Is his face smooth and attractive? Is he as sprightly and youthful as Ms Sarandon? Recent pictures of Mr Beatty are not encouraging on these questions. Perhaps he now wishes he’d followed Gandhi’s example and renounced the carnal pleasures in middle age. There are no prizes for looking like a worn-out old bull. 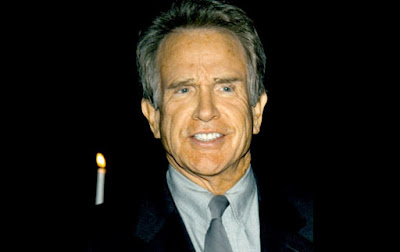 Tales from the Orient 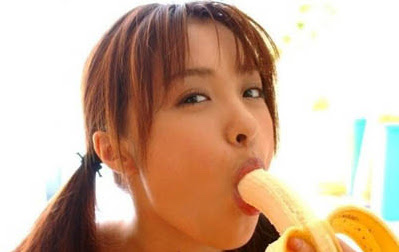 I’m feeling rather conflicted about the Chinese government’s decision to forbid nubile young women from seductively eating bananas on live video streams. On the one hand, the banana is a noble fruit that should never be used as a substitute for the human phallus. To treat a soft sweet delicacy like a piece of meat is an act of culinary barbarism. On the other hand, it’s nice to see Chinese girls behaving coquettishly and exploring their naughty side. Such frivolity is a breath of fresh air after decades of Communist orthodoxy, when they got a reputation for wearing pigtails and repelling cheeky boys with a chopstick in the eye.

The aim of the ban is to stop the practice from “harming social morality”, but the debate it has provoked on Chinese social media indicates it may not be effective:

“They will all start eating cucumbers, and if that's no good, yams,” wrote one sceptical observer.

This is a very good point. A woman’s mouth is capable of hosting an endless variety of foodstuffs. If you ban the sausage she will chew on the carrot; if you ban the chocolate finger, she will suck on the lollipop. The items don’t even have to be edible if she only intends to toy with them. She could suck on a pen or a didgeridoo. It’s a waste of time trying to control what goes in a woman’s mouth. The Chinese authorities would know that if they had more experience in regulating harmless vices.

Many moons ago, I wrote a post in support of Megumi Igarashi, the Japanese artist who makes artefacts modelled on her vagina. The good news is that Ms Igarashi was recently acquitted of the charge of making a kayak that looks like her vagina. The judge ruled that you can’t be sure it’s a coochie because of the psychedelic paintwork. The bad news is that she was still fined $3,700 for sharing data from a 3D scan of her lady parts. I will look for a website where people of conscience can make a contribution to her expenses.

The conclusion I draw from these stories is that human obscenity laws usually involve banning women from doing stuff rather than men. It’s a blatant example of sexism that must be squashed like a cockroach. Women should be allowed to do whatever they want. 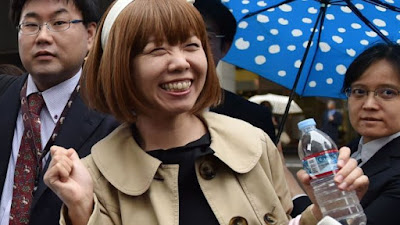 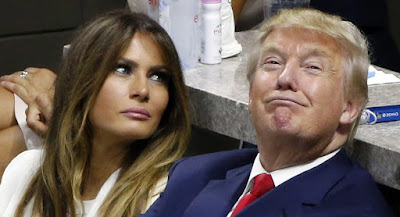 Donald Trump! Donald Trump! He’s the only person the tourists on safari want to talk about. Scarcely a week passes before another fresh-faced actress has a nightmare about him. These starlets need to toughen up. “Better a nightmare than a wet dream” is what I say.

Although I’ve commented on Trump’s antics before, I resolved to hold my peace when he became a presidential candidate. A gorilla should remain aloof from human politics unless the politician in question is trying to imitate a gorilla. Trump looks a bit like an orang-utan, but I don’t think he’s trying to mimic one. A real orang-utan is more deadpan and laconic.

“So why are you breaking your vow now?” I hear you ask. Well, it came to pass that someone referred me to an article about Trump’s wife Melania. It’s a very long article which you shouldn’t bother reading unless you’re planning to spend time on the lavatory. You’d have to be pretty constipated too. However, it takes no time at all to observe the pictures of Mrs Trump, which indicate she’s an exceptionally attractive woman. Trump may have been a boorish oaf to say he had a prettier wife than his rival, but he certainly wasn’t lying.

Beautiful though Melania is, the article suggests she’s not the smartest cookie in the biscuit tin. Yet I would hesitate to describe her as a bimbo who married Trump for his money. Although it must have been part of the attraction, the article suggests she wanted an older man who was fatherly and (by her standards) wise. Some women need to be looked after by Daddy.

This led me to a thought about the likely aftermath of the upcoming election in November. When Trump’s Republican rivals dropped out of the race, I saw fear in his eyes. It was the fear of getting his buttocks caned by a woman. If Hillary wins (as she surely will), Trump would be a broken and humiliated man. After such a debacle, he would be in no condition to protect his wife, let alone keep her satisfied in bed.

Call me a fanciful ape, but wouldn’t this be the perfect opportunity for Hillary to steal Melania’s heart and make her the second lady in the White House? It would be a moral fable worthy of Aesop to see a mighty braggart like Trump have salt rubbed into his wounds. And no woman could feel safer than when lying beside the president, with the secret service outside the door, peeping through the keyhole.

Some might say that such a sensational development would make America a laughing stock in the world. I dare say a lot of hostile pundits in the Eurasian landmass would be sniggering and making satirical remarks. But behind their smirking faces, they would be stunned and amazed by this act of audacity. The closeted lesbians in their own communities would be thrilled and energised, eager for the taste of liberation on their own tongues. For the first time since Neil and Buzz hopped about on the lunar surface, America would be speaking for humanity. 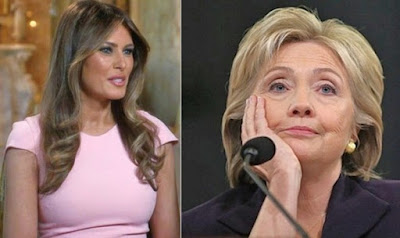 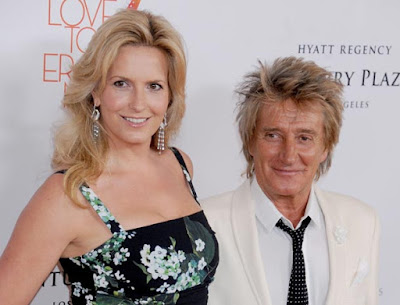 Rod Stewart’s wife has revealed that her husband used to lick her toes when they first started dating:

“In the beginning of the relationship, when you're having a go at all sorts of things, he did that sort of thing in between the toes, which feels nice,” explained Penny Lancaster.

Normally, I would disapprove of a trophy wife revealing such specific information about her sugar-daddy husband’s tongue activity. In this case, however, I think the disclosure will do no harm. In fact, it may even do some good. Those who thought that Mr Stewart was a selfish lover who cared only for his own pleasure must now revise their judgements. If he was generous enough to moisten a lady’s tootsies, he may not be the bimbo-chasing buffoon he once appeared to be.

When I mentioned this story to the manager of the safari camp, he was less than impressed with Rod’s tender tongue caresses:

“You mean he just licked them without sucking them?” he inquired. “She must have been a disappointed woman!”

“Are you implying that all women like to have their toes sucked?” I asked. “It’s not something I’ve read in Cosmopolitan or Marie Claire. Where are your data?”

“Take it from me, they do,” said the manager. “Those magazines don’t tell you everything and I bet you haven’t read all the back issues either.”

Toe-licking is not something we gorillas do, but I admit I was once the involuntary recipient of this peculiar intimacy. It happened during my days in the circus, when a clown with a foot fetish snuck up on me as I slept in my hammock. Unfortunately for the clown, reposing apes react reflexively to ticklish sensations, assuming them to be caused by blood-sucking insects. While shaking my leg to remove the presumed bug, I delivered a kick to the clown’s head that knocked him out cold. Fortunately, he was restored to good health with smelling salts and some minor dental work.

The most notorious toe-sucker of all is Quentin Tarentino. As I’ve already referred to his ghoulish habit in a previous post, I won’t ruin your breakfast by describing it again here. I remember someone saying there were a large number of close-ups of the female foot in his movies. Is this really true? I find it deplorable that a film director would put scenes in a movie purely to indulge his own private fetish. It’s high time Tarentino got grilled about such abuses of privilege by a committee of pedicurist film critics.