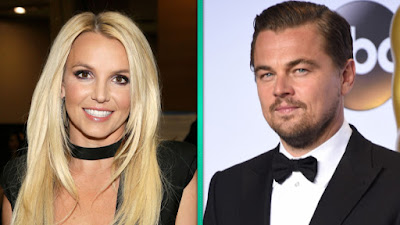 It’s been a long time since I said anything about Britney Spears, which I feel I should apologise for. Not to my readers, who are probably glad of the hiatus, but to myself. Britney, you see, has been in my thoughts for a long time. She caught my attention many years ago, when she shaved her head and her coochie, allowing the paparazzi to take pictures of both of them. These were clearly the acts of a desperate woman having an emotional breakdown, which aroused my concern for her wellbeing. Somehow she survived that crisis, gradually expunging the gremlins in her head, and re-emerging triumphantly with her career back on track and her head full of hair. The state of her lady garden remains unknown, but I’m confident it’s being tended to with due care and attention.

Now Britney has recently been in the news for making it known that she wants to have a romantic relationship with Leonardo di Caprio:

"Britney has insisted she'll do whatever it takes to catch Leo's attention,” said a well-placed source.

You might think she’s being too forward in her pursuit of di Caprio, but that would be ignoring his previous attempts to seduce her:

“Leo always had a crush on Britney,” said the source. “When they saw each other at a party a few years ago, he made a play for her, but she wasn't single at the time.”

So why has the deal not been sealed? It seems that di Caprio is worried about becoming the de facto stepfather of Britney’s children, aged 9 and 10, sired by the oafish rap singer she was once married to.

“Leo's made it clear he likes Britney but everyone knows he's not interested in settling down or playing stepdad to her kids,” said the source. “She would have to be OK with knowing it would never be anything serious.”

It’s fascinating that these negotiations are being conducted by intermediaries, as if di Caprio were the Holy Roman Emperor trying to make an alliance with the Queen of Bavaria. Call me a sceptical ape, but the stepfather issue looks like an excuse to me. Britney’s children already have a biological father (oaf though he may be), and the rich can afford any number of nannies to ensure their kiddies don’t hinder their love lives. The fact that di Caprio has stated in advance that he doesn’t want “anything serious” suggests to me that his intentions are not honourable. I fear that he wants to use Britney like a sex doll and deposit her in the dumpster after he’s finished.

If I had Britney’s ear, I would tell her straight out that di Caprio is a heel unworthy of her amorous feelings. A mother of 34 years must put aside her girlish infatuations and wise up to the wicked ambitions of the dandy and the poodlefaker. I’d hate to see her go through another episode where her head resembles an ostrich egg and her cha-cha is exposed for public desecration. 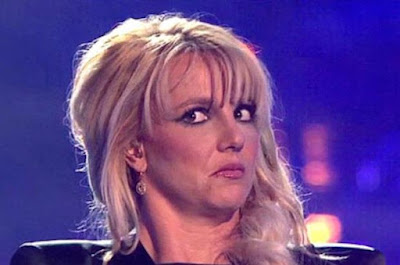 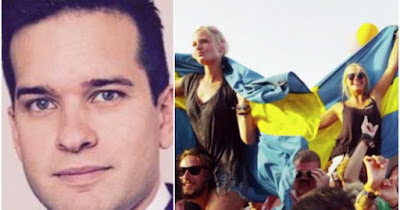 Don’t you just hate it when high-and-mighty politicians dismiss the concerns of ordinary citizens as not worth a rat’s toenail? This recently happened in Sweden, when a man complained to the health minister about a couple having noisy sex.

“You're my only hope,” tweeted the man. “Could you ban risqué exercises after 10pm?”

The minister’s response was arrogance personified:

“Sounds nice for them, I think. Good for their well-being and thus public health as well.”

In other words, the guilty couple could go on making a big hullaballoo during their mating gymnastics with the full approval of the Swedish government. One might hope that the minister’s flippant attitude would make him unpopular with the voters, but I suspect he has carefully weighed the electoral arithmetic. We can divide the Swedish population into four groups:

1) Exhibitionists who want people to hear them having sex.

2) Eavesdroppers who want to hear people having sex.

3) Light sleepers who are disturbed by noisy sex.

4) Heavy sleepers who are not disturbed by noisy sex.

If groups (1) and (2) outnumber group (3), the minister can be confident of winning more votes than he’s lost. The voting intentions of group (4) probably won’t be affected, because heavy sleepers are selfish bastards who don’t care about people who are disturbed by sounds they can sleep through. Such is the harsh and cynical world of human politics.

Now the minister attempted to justify his position by implying that having noisy sex is good for your health. You might think a health minister would be well-informed about such matters, but politicians have a habit of concocting any old nonsense that might win them votes. You don’t have to be a medical genius to realise that shouting your head off while exercising your loins will give you a sore throat. Instead of making you as fit as a horse, it will simply make you hoarse. Will the doctors of Sweden stand up to the minister and denounce him as a quack and a charlatan? The Hippocratic oath demands it, but unfortunately these physicians depend on the Swedish government for their livelihood. He who pays the pipe cleaner decides which holes are blown.

Of course, I don’t wish to imply that humans who make a lot of noise during their conjugal exertions always want the approval of an admiring audience. Those of you who have seen the movie M*A*S*H will remember the scene where Radar places a microphone inside Major Houlihan’s tent so the camp can hear Frank Burns gurgling into her body cavities. The pair were not pleased to be teased about their moaning and groaning next morning. Indeed, when Hawkeye Pierce asked one question too many about the terrain in Planet Hotlips, Major Burns had to be restrained in a straitjacket. You might think that placid Swedes would not be so easily enraged by such mockery, but don’t forget that their ancestors were Vikings. I would also hazard a guess that they make funnier noises than Americans. 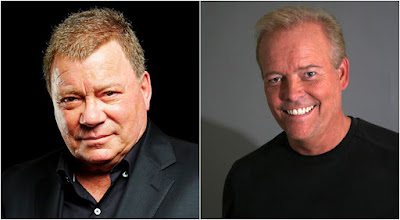 William Shatner has said he’s the luckiest man on Earth, and who could possibly disagree with him? Notice that he said “man” and not “human”. He’s obviously not as lucky as those women who can have 12 orgasms in a minute. Nevertheless, he is justly proud of his many achievements and good deeds.

“I've got a beautiful wife, three beautiful children and I've raised a large amount of money for charity,” he declared.

Now, there are some trekkies who think Picard was a better captain than Kirk. I don’t agree with them. Picard was an uptight character who never let his hair down in front of the crew, whereas Kirk was a cool dude who could horse around and flirt with the alien chicks. This made him a better ambassador for humanity than Picard, because no one wants to make friends with a goody-two-shoes species that hides all its vices and doesn’t know how to have fun. Picard was good for signing treaties after Kirk had pressed the flesh.

So why am I talking about William Shatner? I’ll tell you why! A 59-year-old man called Peter Sloan, who claims to be Shatner’s illegitimate son, is suing his alleged father for $170 million. What he has done to merit such a sum is a mystery to me. His mother put him up for adoption at the age of five, and his foster parents did a perfectly good job of raising him. Maybe they would be entitled to ask Shatner to recompense them for their time and trouble, but Sloan’s demand for cash is pure brazen audacity.

You could argue, of course, that Shatner should have done the decent thing and raised the boy in his own home. That would be ignoring the reaction of Mrs Shatner, who might well have sued for divorce on discovering her husband had fathered a bastard son. It’s a foolish captain who causes his ship to capsize by taking on an extra cabin boy.

Much as I’m rooting for Shatner in this dispute, one aspect of his strategy does worry me: he is denying paternity out of hand. His publicist made the following statement on his behalf:

“Mr Shatner has three lovely daughters, but no sons ... Mr Shatner is aware of the lawsuit, but there's nothing there because he isn't his father.”

Sloan insists that Shatner admitted to being his father in private and now wants a DNA test to settle the matter. At the age of 85, Shatner might be playing for time in the belief that he’ll be dead before the court orders him to comply. I would have preferred to see him acknowledge his son, while condemning him for his greed and unwarranted sense of entitlement.

Of course, this lawsuit could only arise because American courts have got a reputation for giving people large sums of money for no good reason. As we say in the Congo, if you feed one crocodile, be prepared to feed ten the next time. 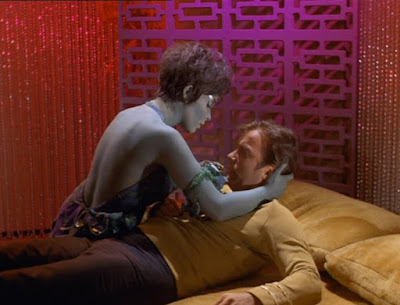 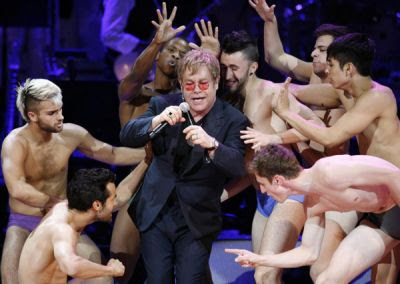 An email correspondent asks me whether I’m going to comment on the sexual harassment lawsuit against Elton John. To be honest, I was hoping to avoid the subject. Sexual harassment is one of those vices that humans feel obliged to denounce in very strong terms lest anyone doubt the sincerity of their disapproval. Yet there are obviously wide variations in the degree of aggravation caused by deeds of a different nature. I know from experience that no one has much sympathy for a 500-pound gorilla who is the victim of an unsolicited butt massage from an infatuated human female. In such a situation, the gorilla is expected to shake the woman off gently and provide her with counselling and a souvenir.

Now, Elton John is a man I have grown to admire. I strongly approve of his commitment to family life, which includes marriage to a trouser-wearing husband and two beloved boys produced by a surrogate mother. He is also a musician of note. Some may argue that my high regard for Elton makes me biased in evaluating the allegations against him, but I shall strive to be impartial. As a former circus ape, I have plenty of experience in mediating between feuding humans.

The name of Elton’s accuser is Jeffrey Wenninger, a former police officer in the LAPD. The alleged incidents occurred while he was working for Elton as a security guard. According to Wenninger, Elton committed the following misdeeds:

1) Telling Wenninger to “get your todger out and say hello to Uncle Elton”;

2) Attempting to grope the said todger with his hand;

3) Twisting Wenninger’s nipple while saying “you gorgeous thing, you”.

Elton’s lawyer has issued a strong denial, but I’d be lying if I said I found it convincing. I remember seeing Elton talk about his sexual preferences in a chat show. It clearly irritated him that heterosexuals were unable to appreciate the attractions of their own sex, while he had found sleeping with women perfectly tolerable. He didn’t seem like the type who would wait for subtle cues before trying it on with a man who took his fancy.

In spite of this, I just can’t find it in me to sympathise with Wenninger. To put it bluntly, a former LAPD officer shouldn’t have allowed a silly old queen like Elton to harass him. How can a man who has apprehended hardened criminals be cowed so easily? Elton may have been hardened, but he certainly wasn’t a criminal. One firm tweak of his nose would have put him in his place. 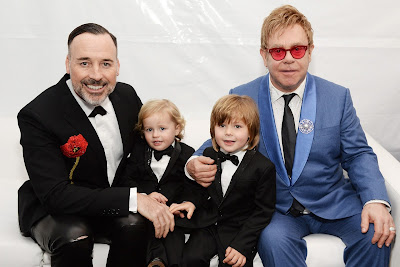