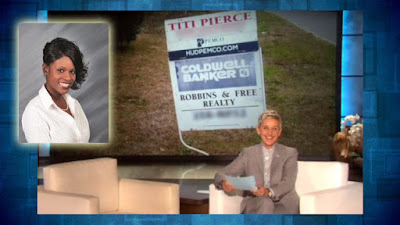 Why is it that celebrity lawsuits take so long to settle? The gossip rags report that someone famous is being sued and you don’t hear a thing about it for months. I’m still waiting to discover the outcome of Elton John’s dispute with the bodyguard he allegedly groped. The wheels of human justice grind more slowly than a lap-dancing snail.

The latest legal battle currently in stasis involves Ellen Degeneres and a 35-year-old woman called Titi Pierce. In this case no groping occurred, although it might still happen if they meet in a dark cubicle. Titi is upset because she was referred to as “Titty” in Ellen’s TV show. Apparently, the correct pronunciation of her name is “Tee Tee”, and those who confuse it with a vulgar term for the breast are guilty of malicious hate speech. Her lawyer issued the following statement on her behalf:

“In all her 35 years of life, no one has ever referred to Ms Pierce as ‘Titty’ until the Defendant did so on February 22, 2016 on national television. Prior to the Defendent’s misdeeds, Ms Pierce has been called only by her name ‘Titi’, which as grammar dictates, is pronounced ‘TEE TEE’”

As a result of this appalling insult, his client “suffered stress, emotional distress, embarrassment, humiliation, anger, and other mental pain and suffering”. She might also have acquired a nervous tick and a zit on her butt. Yet no one can deny that making fun of an exotic name is a coarse form of humour employed by the lowliest wags. Ellen should hang her head in shame and make fun of her own breasts as a penance. She should also offer to pay compensation of not less than forty-six US dollars.

Nevertheless, I do find it amazing that no one had ever mispronounced Titi’s name before. Maybe she lives in a church-going community whose residents would never say the word “Titty”, not even if they saw a topless dancer shaking her jahoobies in their direction. However, Ms Pierce is a realtor, so she must have encountered people from all walks of life, including those who snigger at boob jokes. I suspect that many of her clients were suppressing their chuckles and calling her “Titty” behind her back.

Some women, of course, have more suggestive names than “Titi”. Fanny Cradock was a pioneering British TV chef, admired as much for her domineering personality as her recipes. Yet there is no evidence that anyone ever made fun of her name. Some might have been too scared to do so, but jokes of that kind would have fallen flat in any case. Having a humorous name is a minor distraction if you’re a ballsy woman who can stuff a turkey and mash potatoes at the same time.

The lesson for Ms Pierce is clear enough: People will only mock your name if they have nothing else to say about you. To put yourself beyond such foolish quips, you’ve got to raise your public profile and get a reputation for being a hard-ass uppity bitch. 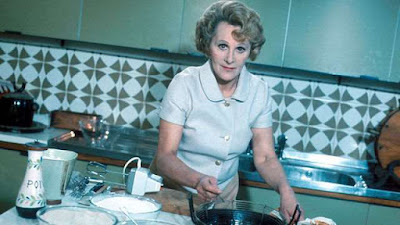 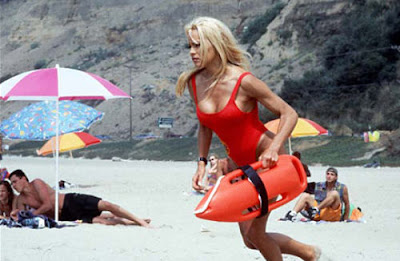 Pamela Anderson is such a good sport! In a recent interview, she revealed that she has often indulged the fantasies of her boyfriends by adopting her Baywatch persona and re-enacting scenes from the much loved TV show. By way of illustration, she gave the following anecdote:

“One of my boyfriends wanted rescuing from the bed. So I jumped in the shower, got all wet, and frisky and then did the slow-mo run all the way from the shower to the double bed. I think he was pretty satisfied with the performance.”

If you think that was no big deal, do some research on how a “serious” actress like Sharon Stone reacts to men who expect her to behave like one of the characters she has played. You will find her whining about ex-lovers who hankered after “that woman on the screen” instead of her, for which misdemeanour they were haughtily rebuffed and shown the door.

Pamela, by contrast, has the sunny disposition of a woman who doesn’t overanalyse her relationships. She clearly has neither the expectation nor the wish for men to gaze into the inner depths of her soul. Consequently, she is more than happy to use the armoury in her acting repertoire to entertain her gallants. You have to admire a woman who doesn’t make a fuss and gets on with the job in hand, no matter how unusual the request.

Now Pamela is certainly a lucky woman who has milked her talent for every drop of sustenance it could provide, but that doesn’t mean her life has been free of aggravation. I’m sorry to say she is one of the growing band of celebrities who has been tormented by a stalker. In the same interview, she disclosed that the stalker had not only spied on her furtively but broken into her home to harass her in person. This disturbed individual was a woman who attempted to placate Pamela with the following invidious assertions:

I’m glad to say that Pamela was not beguiled by these words and asked the police to intervene before any touching could occur. Had I been the stalkee, I would have told the stalker that not being a lesbian is nothing to be proud of. Pamela should have said that she wouldn’t want to be touched by a woman unless she was a lesbian, and a pretty damned hot one too!

When all is said and done, you have to give Pamela her due for still getting all this attention at the age of 49. Why is she still newsworthy? It can’t be because of her oversized bosom, which lost its ability to shock and amaze a long time ago. No one should dismiss Pamela as a walking pair of melons. My guess is that people find her uncomplicated personality engaging. It’s much easier to be loved by the masses if you’re an earnest simpleton who is devoid of any pretensions or conceit. 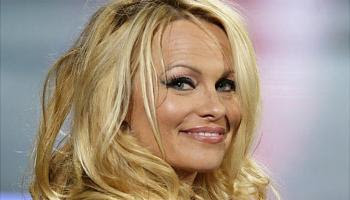 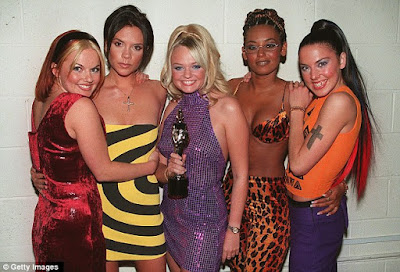 The Spice Girls have admitted that they used to kiss each other “once in a while”.

“Because of what we went through together, there's a bond that no one else understands,” explained Emma Bunton.

I think we can take it as read that it was mouth-to-mouth kissing with probing tongues. It wouldn’t be much of a confession if they were giving each other an affectionate peck on the cheek.

I don’t know how their fans will react to this revelation, but it all sounds completely natural to me. They were young, passionate women with pumping hormones, sharing hotel suites and borrowing each other’s toiletries. Their close camaraderie was bound to spill over into something more intimate in moments of high emotion. And don’t forget all the dancing they did together, shaking their booties in perfect synchrony. It could only have stimulated their mutual attraction.

Having admitted to kissing in private, should they now do it in public? The reunion concert planned for next year would be an idea venue for a spicy exhibition of smooching. When I asked the manager of the safari camp for his opinion, his answer was unequivocal.

“Of course they should do it!” he declared. “They’ve created the expectation, so now they’ve got to follow through. No one likes performers who are all talk and no action.”

“Which pair would you like to see press lips?” I asked.

“They should take it in turns to snog Baby Spice,” he replied. “Make her blush and pant for breath.”

“That sounds disturbingly similar to a ‘gang bang’ scenario,” I remarked. “Maybe you should browse vixens.com for a suitable movie instead.”

It goes without saying that the Spice Girls don’t have to kiss each other to remain popular. I can think of very few musical acts in which kissing was an essential part of the entertainment. Did Sonny and Cher kiss after singing I Got You, Babe? I’m not convinced that they did, even though it would have been artistically justified. And what would it have proved anyway? They soon got divorced after their double-act lost its appeal.

That reminds me of another thing I admire about the Spice Girls – they never got bitchy with each other after they parted company. I’m pretty sure Cher insulted Sony Bono after he got into politics, implying that he was a midget who was useless in bed. It was an ugly slur against real midgets, who are often as good in bed as people twice their size. 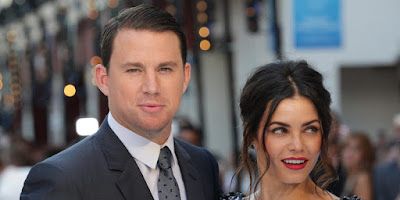 Channing Tatum has revealed that he and his wife don’t enjoy marital relations after having an argument. According to Cosmopolitan magazine, this is what he said:

“For lack of a better term, we don't hate-fuck each other. That's just not what we do.”

My immediate reaction to this statement was to wonder why he would deny doing something so damnably perverse. I wouldn’t want to hate-fuck my worst enemy, let alone a female I had to cohabit with on tolerably amicable terms. Is there an epidemic of hate-fucking going on in human marriages from which Tatum feels obliged to disassociate himself?

With these conundrums pattering away inside my brain, I embarked on a visit to the safari camp to ask the manager for his profound insights on the topic. On arriving, I was told he was away at the Brazzaville Nut Festival, so I requested an audience with his wife instead. When I raised the issue, she cackled like a witch throwing frogs into a cauldron:

“Oh GB, you innocent ape!” she exclaimed. “We humans must seem so peculiar to you!”

“Don’t tell me you indulge in the practice yourself!” I gasped.

“Well, let me put it this way,” she said. “When you’ve been married for a long time, you need to use whatever strong emotions you have to keep the sparks flying in bed. Some of the best sex I’ve had happened after telling my husband he was a swine and a nincompoop.”

“Of course,” she replied. “He gnashed his teeth and howled like a wolf. And he was proud of the scratch marks I left on his back.”

“He must have thought they were like combat scars,” I mused. “He loves films about Roman gladiators. Maybe he fantasises about being one.”

“You could be right,” she remarked. “He’d be the one with the short stabbing sword rather than the trident and net.”

On returning to the jungle, I pondered on how common this sort of behaviour is among human mating pairs. Clearly, there are dangers involved if the man becomes too enraged and shows no mercy. Could this be why Tatum and his wife avoid the practice? He’s certainly a brawny fellow with powerful arms and thighs, but it would be idle to speculate on other matters. The bull with a meatiest carcass isn’t necessarily a longhorn.

In the same interview, Tatum indicated that abstaining from this particular type of intimacy did not stop him from enjoying a varied sex life with his wife:

“We truly have all different kinds of sex,” he explained. “Sometimes it's: Look, you've got to get this done, I've got to go to work.”

Being told to hurry up is not the most inspiring thing to hear when you’re pleasuring the missus, but I suppose every marriage has to run on a timetable. He didn’t say whether he was capable of expediting matters in the manner requested. It's easier for some men than others, I believe. 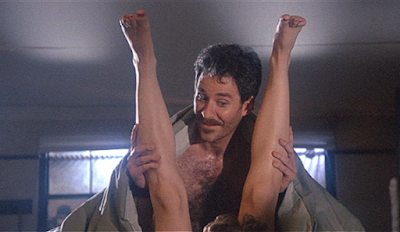