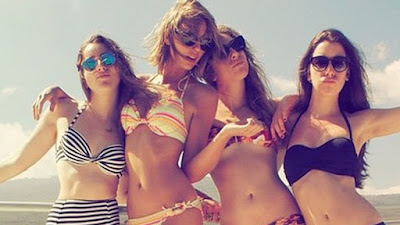 The abdominal aperture’s exposure is all the more surprising given Miss Swift’s earlier announcement on the subject:

“I don’t like showing my belly button… I don’t want people to know if I have one or not.”

We should thank her for resolving the ambiguity. There are baboons in the Congo who might have worshipped Miss Swift because they believed she was a magical being with a smooth, un-punctured belly. Such harmful superstitions inevitably lead to baby wart-hogs being sacrificed on altars.

If we examine Taylor’s tummy-cranny, it’s clearly an “inny” rather than an “outy”. Indeed, it has the suggestion of an unusually cavernous “inny”. If a tribe of chimpanzees ever got hold of Taylor, they would poke their fingers into her navel to gauge its depth. I should imagine many humans would do the same if they weren’t inhibited by cultural taboos against the poking of celebrity belly buttons.

Miss Swift would be well advised to avoid such outrages by wearing a navel plug. A skilled craftsman could make a custom-made device with a carbon-fibre shaft and a dazzling sapphire head. Those who dared to stare at Taylor’s midriff would be awed and stunned by a flash of blue light.

Of course, there are some men who wouldn’t be able to probe a woman’s belly button because their fingers are too thick. Liberace comes to mind, although he may have lacked the curiosity in any case. David Hasselhoff is another fellow who might be digitally incapable, although one can’t be certain about this. Being tall and tanned doesn’t necessarily mean the fingers are beefy and butch.

The Hoff has recently been in the news for claiming that he doesn’t need Viagra. Acutely aware that people must be wondering how a 62-year-old man keeps his 35-year-old girlfriend satisfied, he has taken to boasting about his prodigious carnal appetite:

“That’s one problem I don’t have,” he assured an on-line magazine. “If anything, I am trying to find an anti-Viagra pill because my girlfriend keeps saying, ‘Why is it that you want it every day?’ And I'm like, ‘Because I find it takes the edge off things’.”

I don’t doubt for one second that the Hoff has the libido of a stallion on a stud farm, but why does he need sex to take the edge off things? A man in the Hoff’s happy situation shouldn’t be feeling edgy and tense. If you ask me, his girlfriend isn’t the great catch everyone assumes her to be. For one thing, she’s supposedly turned down five marriage proposals from the Hoff, which must have damaged his ego. And what kind of woman complains about having sex every day? Not a woman whose belly button you’d want to poke, that’s for sure. 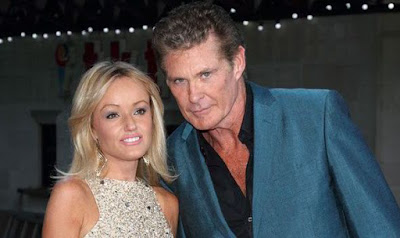 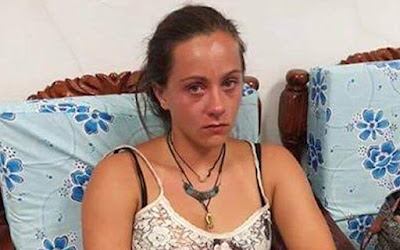 I admit to feeling sorry for the English floozy who was arrested in Malaysia for stripping off on a holy peak. How was she to know that her stunt would offend the local mountain gods, causing them to instigate an earthquake measuring 6.0 on the Richter scale? The local tribespeople wanted her to atone for her sacrilegious act by offering the gods ten buffalo heads, but unfortunately she didn’t have any. The Malaysian authorities then took the law into their own hands by charging her with “causing a nuisance”, which is apparently an imprisonable offence in their country.

Had I been the girl’s defence lawyer, I would have made a plea for mercy by pointing out what she didn’t do. Had she performed her nude caper in one of the Mediterranean resorts frequented by British tourists, the locals would have slapped their foreheads in astonishment at her moderation. In the Costa del Sol, the English woman who strips naked is expected either to perform oral sex on the nearest drunken oaf, or douse her body with an alcoholic beverage for the drunken oaf to lap up like a thirsty wolf. The incident would typically be recorded on a mobile phone to provide her with a serviceable memento. Those who are too inebriated to remember the fun they’ve had now take the precaution of capturing it on a digital device to prove it to themselves afterwards. Such are the blessings of modern technology.

The girl’s father has described her as “a very intelligent, stoic young woman”. I suppose we’ll have to take his word for it. The thin mountain air might have turned Tolstoy into a giddy-headed fool. Now that she’s back at sea level, she should validate her father’s words by giving a seminar on meditating in windy places.

Humans from conservative Asiatic countries often remark on the shamelessness of libertine westerners. What they fail to realise is that repressing feelings of shame is sometimes a virtue. Consider the case of Boris Becker, the former tennis maestro, who impregnated a woman in a restaurant in less time than it takes an Olympic sprinter to win the 100 metres. After DNA tests proved his paternity, he humbly accepted his fate, agreeing to a generous divorce settlement with his wife and maintenance payments for his illegitimate daughter.

The girl, now aged 15, is an aspiring model, and her father is suitably doting. Far from being ashamed at having procreated in circumstances that would make a baboon blush, Becker has described the brief coupling as one of the more felicitous events of his life:

“If that's what I'm remembered for, then I'm proud,” he told a British TV network.

I think Becker’s conduct provides a useful lesson for saucy English wenches who prance around naked in exotic holiday destinations. If you’re going to take your clothes off, make sure you get knocked up by a famous sportsman who thinks doing it standing up is an effective method of contraception. The semen of the alpha male is worth its weight in Estée Lauder face creams. 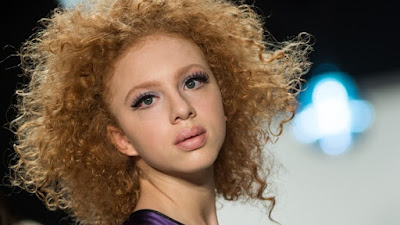 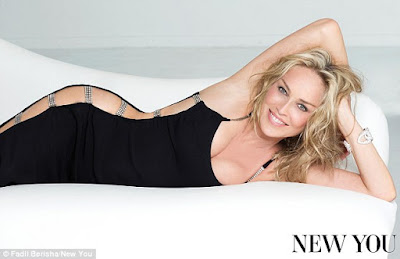 Can you believe that men are scared of Sharon Stone? This is what she says:

“Guys run away. People bought into the story that I'm a sex symbol but I'm not really. I'm really the girl with the baggy clothes and the bag of books.”

“I wish more guys would throw themselves at me,” she added.

What kind of poltroonery is this? I’d like to unleash a raiding party of female gorillas on the men of America to teach them what real fear is. Why anyone would be scared of Sharon Stone is a mystery more puzzling than the Bermuda octopus. Admittedly, she did play a woman who kept an ice pick under her bed in Basic Instinct, but that was just an acting role. I’d be amazed to find the spindliest bodkin beneath her bed in real life.

Sharon’s bewildering predicament prompted me to give Smacker Ramrod a call. My old circus buddy has never failed to shed light on anthropological anomalies of this sort. This is what he told me:

“I wouldn’t be scared of her myself, but I can see why men with fragile egos would find her intimidating. They assume she’s been serviced by the finest studs on the planet and fear they’ll be found wanting in the bonking department. The fact that Miss Stone has demonstrated her expertise at faking orgasms on film would do little to reassure them.”

I thanked Smacker for his explanation, which I have since given some thought. Is being judged a mediocre lover by Sharon Stone really a prospect to be dreaded? You’ve still slept with her, after all, so how are you down on the deal? Surely a man in that situation should just shrug his shoulders and say “C’est la vie”. You can’t have everything in life.

One fellow who probably wouldn’t be scared of Sharon Stone is a cyclist who made a spectacle of himself during a nude bike-riding event in England. It seems that the exposure of his private parts to a crowd of onlookers caused him to become sexually aroused, provoking much dismay and consternation.

“Everyone was taking their clothes off to get ready for the ride,” said one witness. “I heard gasps and I turned around – it was a horrible sight.”

Fortunately, the police were at hand to pull the man aside and give him a stern lecture. He was instructed to put on a pair of trousers.

My only reaction to this story is to marvel that a human could be so similar to a baboon in his bodily responses. I’ve seen more baboon stiffies than I’d care to remember, which is a perpetual hazard in the jungle. The golden rule is never to react with a show of emotion, which would be taken as a sign of weakness. Just maintain a poker face and attend to your affairs without interruption.

Baboons are vulgar exhibitionists who have no fear of their fellow primates, but their erections are no more dangerous than Sharon Stone. 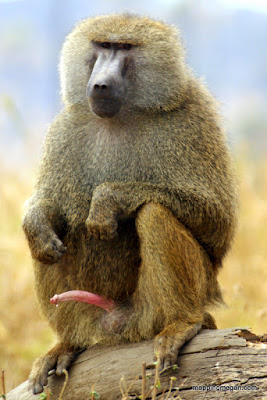 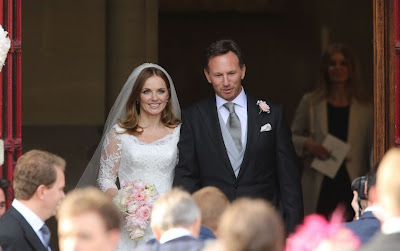 I got an email from a blog lurker asking me why I hadn’t congratulated Ginger Spice on her wedding, which occurred last month. Having previously anointed Ginger as the Spice Girl I’d most like to eat, this was indeed a regrettable oversight. I apologise profusely to Ginger for my lapse, and wish her all the blessings that matrimonial co-indulgence can bring.

Ginger’s husband is a suave-looking fellow called Christian Horner, who at the age of 40 is only two years younger than his wife. Fortunately, this age difference is too small for Ginger to be called a cougar or her husband to be called a toy-boy. I predict the marriage will last longer than J. Lo’s last one or Madonna’s next one.

Now Christian Horner is a slightly odd name for a human, but not sufficiently strange to indicate his parents were upstarts or anarchists. It is actually a hybrid of ‘Hans Christian Anderson’ and ‘Little Jack Horner’, which implies a consistent theme. The man is apparently a former racing driver, so he might be in a hurry to prove himself. If I were Ginger, I would install speed bumps in the driveway and a portrait of Gerard Depardieu above the marital bed. As the senior partner in the marriage, she should be the one who sets the tempo.

Perhaps if Ginger’s husband were famous his name wouldn’t seem odd at all. It is certainly less peculiar than ‘Art Garfunkel’, yet no one twitches a nostril when that name is mentioned in the art galleries and saunas of New York City. Art has recently been in the news for describing Paul Simon as “an idiot” and “a jerk”. He considers these harsh epithets to be justified because Paul chose to end their musical partnership in 1970.

"How can you walk away from this lucky place on top of the world, Paul?” asked Art of his former comrade-in-song.

But was Paul really “walking away” from success? Given that he wrote all the songs, it might be more accurate to say that he kicked Art out of the band, possibly because the hairstyle was getting on his nerves. My only regret about this divorce is that it destroyed Paul’s ability to write great songs, much in the same way that the other Paul lost his mojo after leaving The Beatles.

Does being in an unhappy situation inspire artists to produce great art, possibly as a form of escapism or self-mollification? We don’t know much about Shakespeare’s life, but he must have suffered episodes of gloom and despair. That much was inevitable in a society where farting in the presence of nobility was a banishable offence.

Perhaps I should spend a few days in a tree overhanging a mangrove swamp to see whether I can compose some tunes on my recorder. If misery is what’s required, there are few more miserable places in the Congo. If the tunes are any good, I’ll release them in an album called ‘Bridge over Troubled Crocodiles’. 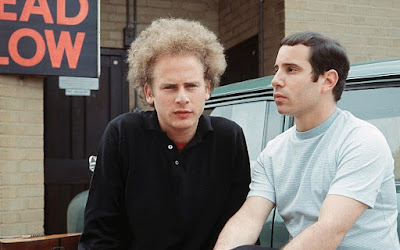