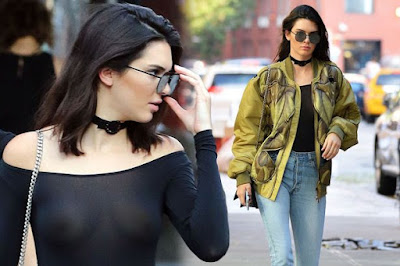 I’m wondering whether I should lend my support to the ‘Free the Nipple’ movement. In principle, I’m wholly in favour of liberating enslaved nipples so they can live their lives in comfort and dignity. However, the leader of the campaign is a young lady called Kendall Jenner, who appears to be completely out of her depth. When given the opportunity to speak out on the issue, she said.

“Lately, it's like I'm either braless or I have my bra out. I'm all about freeing the nipple.”

This was a very poor statement. She seems to think that allowing people to see the outline of her own nipples is the answer to everything. What about the average woman who has a regular job and is forced to keep her nipples under lock and key? The long campaign against slavery wasn’t won by Abraham Lincoln boasting about his own freedom and refusing to pick cotton. He had to fight a war and sign proclamations and do other stuff.

In my perplexity, I resorted to asking the manager of the safari camp what the Free Nipplers really wanted.

“They’re feminists,” he explained. “They want to have the right to drive men nuts by exposing their own nipples without letting anyone touch them.”

“But won’t men have the right to expose their nipples too?” I asked.

“Not the same thing,” he replied. “Our nipples aren’t as big and they don’t squirt milk. No one cares if they are visible.”

“Well, maybe you should pretend you don’t care about seeing a woman’s nipples,” I suggested.

“I could pretend, but my eyes would give the game away,” he said. “They’re like smart cameras programmed to zoom in on them.”

I thanked the manager for his opinion, but I don’t believe he speaks for most men. He must have some kind of udder fixation that makes him unusually agitated in the presence of a female nipple. Perhaps he was suckled by an enormous wet nurse when he was a baby. What I don’t understand is why this campaign is viewed as a feminist issue. The Suffragettes never demanded the right to expose their nipples or wear wet t-shirts. The cause of nipple freedom may be just, but it won’t be helped by making bogus assertions.

If the Free Nipplers want to be taken seriously, the first thing they should do is fire Kendall Jenner as their spokesperson. Although she’s a comely lass with decent nipples, she clearly isn’t up to the job of leading a mass movement. The next step would be to broaden their campaign to include a full range of nipple rights for all mammals. Dairy cows, for example, are compelled to have their udders sucked dry by ugly pumping machines. This is a far graver injustice than suffered by human females. Lastly, they should stop trying to humiliate men by implying that the male nipple is irrelevant. You can’t demand rights for yourself while acting as if others don’t matter. 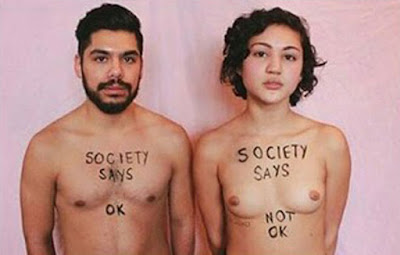 Long-standing readers of this blog will be aware of my disdain for King Kong. I have a number of issues with that overgrown ape. First, that he stomped around his native jungle making a hullabaloo instead of foraging and fornicating like a proper gorilla. Second, that on escaping from captivity in New York City, he created havoc and climbed a skyscraper instead of making a beeline for the nearest forest. But third, and worst of all, that he fell head-over-heels in love with a human female, needlessly endangering himself to keep her in his hairy clutches. I hope I am stating the obvious in pointing out that real gorillas do not behave in this way. And those that did would flee to a barren rock to die of shame.

One of our human guests at the annual simian convention was a young American chap who told me he had recently graduated from the New York Film Academy. In spite of wearing a baseball cap back-to-front, he seemed quite knowledgeable for an American, so I invited him to parley with me on the King Kong question.

“You’ve got it all wrong, GB,” he said after listening patiently to my critique. “King Kong wasn’t in love with Ann Darrow. She was just a plaything who amused him by scampering about like a mouse and hollering at him whenever he tripped her up. Sure, he loved her, but in the same way that Long John Silver loved the parrot on his shoulder. It wasn’t a romantic thing.”

“That’s an interesting theory,” I mused. “I’d love to believe it, but answer me this: why did he risk his life to protect her?”

“People get very attached to their pets,” he replied. “Humans have often risked their lives to save their dogs. Remember Dorothy and Toto in The Wizard of Oz? Couldn’t a gorilla develop the same feelings for a pet woman?”

After considering the matter, I was forced to concede the point.

“Thank you for sharing your perspectives, young Sir,” I said. “You have marshalled your arguments well and given me food for thought.”

Plausible though his theory may be, it does not significantly elevate my opinion of King Kong. His infatuation might have resembled what humans feel for a kitten, but it was certainly a foolish one in the circumstances. Love-struck he may not have been, but sentimental ninny he certainly was.

If a nubile woman turned up on my doorstep in a helpless state, I would extend her every courtesy, but treat her in a formally correct way. The horseplay that occurred between Mr Kong and Miss Darrow would be out of the question until our relationship had progressed to a higher level. I would not endanger my life for her until we were bosom buddies, at the very least.

To the Ann Darrows of the world, I say this: Gorilla Bananas won’t bathe you under a waterfall until you’ve earned his affection. It might take a good fortnight to butter me up sufficiently. 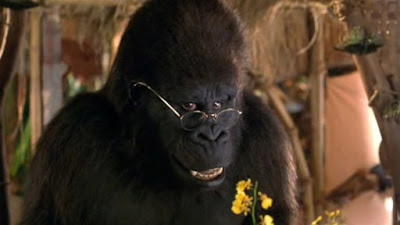 Gorilla Bananas is away at the Annual Simian Convention and will return next week. 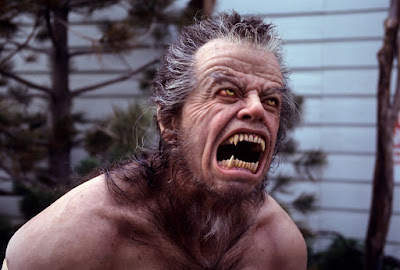 Apparently there’s been a werewolf sighting in the north of England. The creature is said to be eight feet tall with dog-like features and a bad breath problem. A traumatised woman made the following statement:

“It was stood upright one moment. The next it was down on all fours running like a dog. I was terrified.”

The British press have named the werewolf ‘Old Stinker’, which is a foolishly provocative jibe to make while the beast is still running at large. Admittedly it’s unlikely that the creature reads newspapers, but why take a chance? A werewolf with a grudge is less likely to keep its fangs to itself than a werewolf without one. Calling it names will only make it more difficult to achieve a negotiated solution involving mouthwash and a manicure.

Biologists have been quick to dismiss these werewolf reports as a case of mistaken identity, fuelled by fantasy and hyperactive brains. ‘Old Stinker’, they insist, must be an oversized dog. I suppose it’s possible that Scooby Doo could have been confused with a werewolf, especially after Shaggy had jumped into his lap. But I don’t respect scientists who pooh-pooh eyewitness accounts without doing the necessary detective work. They should be conducting field trips and collecting dung samples before jumping to conclusions.

Is it true that women have sexual fantasies about werewolves? It’s what all the werewolf movies imply. I remember a film called Wolf starring Jack Nicholson, who somehow got transformed into a creature of canine appearance. It made him behave like a hungry sex fiend intent on leaving his bite marks in a woman’s fleshy parts. Yet I don’t believe that a hound-like animal is a natural bedfellow for the human female. His teeth may be sharp, but his tongue does not probe with the required finesse. And doing it doggy-style gets boring after a while.

If a werewolf wants a mate, it really ought to be a female werewolf, who could match him bite-for-bite. Strangely, you never hear stories about lady werewolves. These days, most women are desperately keen to shave off their body hair, so the idea of turning into a furry bitch would probably horrify them. Nevertheless, there are some women who have the right personality for the role, with many of them keen to advertise their talents.

It’s been a long time since I visited the website of a dominatrix, so I’m glad to have an excuse to do so now. Sadly, I never provoked any of these viragos to leave a comment on this blog. In truth, their writing skills are not of the highest order, so you probably haven’t been deprived of any exquisite quips or bon mots. Nevertheless, if I do manage to strike up a friendship with someone like Mistress Tatiana, I promise to move heaven and earth to make her agree to an interview, which I shall publish in full for your enlightenment. Who knows, I might even persuade her to give her body hair a chance to sprout. 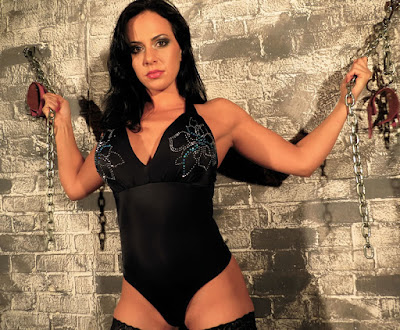