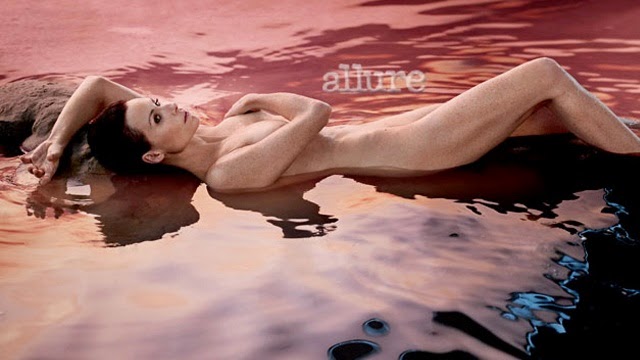 An anonymous emailer (ictits@yahoo.com) asks me if any pictures would be too distasteful for this blog.

“Yes, a picture of your head on a platter,” I reply.

An impertinent question deserves a facetious reply. As far as I’m concerned, none of the pictures published here is distasteful. Those of a sensitive disposition might find some of them disturbing or bewildering, but that can’t be helped. We live in a disturbing and bewildering age. It is better to look reality in the eye than nuzzle utopia in the groin. If you want to live in a fools’ paradise, go to Disneyland and play booty-bumps with Mickey and Goofy.

It goes without saying that the internet is overflowing with pictures I would never post here. I recently came across a particularly inappropriate one of the model Candice Swanepoel. It shows her in a state of undress with the head of a purring cat between her thighs. I suppose she thought the pussy-on-pussy motif was funny, but to me it’s a flagrant case of pet abuse. The cat may be snoozing contentedly, but it looks like a bigger twat than the one it’s obscuring. The feline gods have been offended, and will revenge themselves on mankind by spraying the suburbs with rainstorms of piss.

A nude photo of Miss Swanepoel not being nutmegged by her cat would have been okay, but I probably wouldn’t have published it. Human nakedness does not interest me unless the naked human is making a statement of some kind. An example of such has been provided by the actress Minnie Driver, whose naked form is displayed above. Apparently she’d received an unflattering response to pictures of herself on twitter, so she decided to naysay the naysayers by proudly flaunting her flesh:

We gorillas prefer more meat on our females, but that’s not a criticism of Minnie. I believe there are men who lust after waifish women, possibly because it makes them feel bigger and manlier. Good luck to them.

Below is the kind of picture I most enjoy uploading – it’s of the actor Kellan Lutz making an arse of himself in front of a gorilla. He’s going to play Tarzan in another remake of the classic jungle fantasy, and his antics were an attempt to practise for the role. Little does he know that few gorillas have heard of Tarzan, so it’s very unlikely the silverback in the picture is thinking “Oh, what a good actor that fellow is.” From the look on his face, I would guess he is thinking “Oh, look at that man making an arse of himself.”

I wouldn’t say I’m hostile to Tarzan, but it’s never been explained why he wore a loincloth. No human infant brought up by apes would be ashamed of his genitals. I believe women found the sight of a man's dangly bits embarrassing when the first Tarzan films appeared, but don’t the women of today just laugh at such sights? 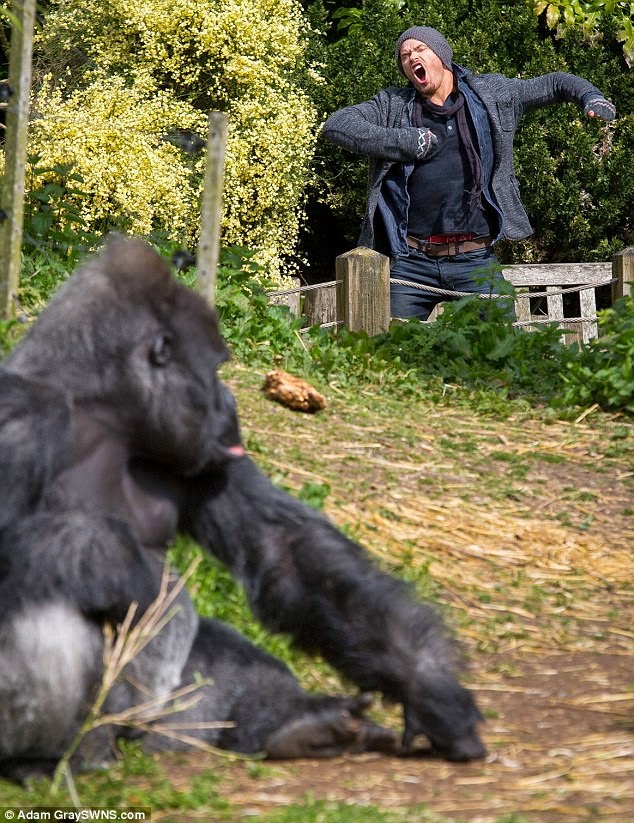 Comments:
Miinie is too minimalist for me.

Like Gorillas I prefer a bit more meat on the bones.

As long as I can watch them without upsetting my students.

"Dangly bits" made me lol!

Dangly bits??!!?? LOL
So far nothing on your blog has offended me...made me blush, brought a tingle, surged a few giggles...but no offending.

If I was this Kellog Luntz bozo I would be careful. That gorilla might think he is performing a mating call.

I do hope that gorilla farted into Mr Lutz's face... provided, of course, it wouldn't be considered a waste of air.

Minnie too skinny. Gorillas know best. Pussy pic has an element of art that I like but the cat looks like it's about to puke.

TS Bastard: I think your students would be delighted to discover your blog. They'd laugh and say things like "There's life in the old dog!"

Jennifer: Hello and welcome, Jennifer. Thank you for confirming my last point. If just the thought of them makes you LOL, the sight of them surely will!

Rose: I'm glad to hear that, Rose. Blushing, tingling and giggling are good for a lady's complexion!

Jimmy: Female gorillas present their rumps when they want to mate, Jimmy. Have you ever been mooned by a human? It happens quite often to people in movies, but how many of us are lucky enough to experience it in real life?

Steve: It would have been a fitting response. The gas has to go somewhere and Lutz's face is as good a place as any.

Juliette: I wouldn't blame it for puking, Jules. You can't expect a cat to enjoy that sort of thing. Women who think their cats fancy them are labouring under a massive delusion.

Your pictures are the BEST! Are you kidding? I usually read this stuff in the morning. What better way to start my day than wade through your prose and pics. Don't listen to the naysayers. Keep 'em coming.

I like how Sean Connery says "pussy." Had he read the second paragraph out loud, it would have been, "poo-shay-on-poo-shay." That pic has a lot of likes. I like it.

Are you applying logic to Tarzan? Really?

Sex sells. I used to post a lot of right-on-the-edge of inappropriate images on my old WP but the one that got the most hits, that's still getting the most hits five years later is "Dirty Animal Sex" which was simply about my first experience being exposed to animal husbandry.

Humans are a twisted up species indeed.

nutmeg! i hope to see a lot of nutmegging when the world cup plays out. thank you for reminding me that i must begin my preparations, new tv.

I don't mind dangly bits..lol I don't even mind my girly bits. Do I want to see pictures of them all over the internet..probably not. I don't mind inappropriate pictures either, they make good conversation pieces.

Kellan Lutz resembles a boss once had. Would have rather had the gorilla in charge of my paycheck that that Neanderthal...

I wonder if Minnie's breasts are real. They look like the only meaty part of her body, right, GB? I don't much like staring at dangling bits. If they're dangling from a hot body, then I say, "Don't take it out if you're not going to use it."

Exile: Thank you, Mr Exile, I shall endeavour to keep you entertained in the mornings. As for Tarzan, he ought to a believable as a cultural ape if the story is to be enjoyed by real apes.

Scott: That must be because hundreds of people google "dirty animal sex" every day. I should imagine most of them were too disappointed to leave a comment.

Billy: I never knew soccer was big in Canada. Aren't you guys in the American sporting empire?

Mary: That's nice to know, Mary, you're a broad-minded lady! Have you ever laughed at dangly bits?

HermanTurnip: Chimpanzees are usually better at that kind of administrative work.

Robyn: Minnie's body looks real in the sense of being really emaciated, Robyn. "Use it or keep it in your pants" is something Mae West might have said! She wasn't a nice Jewish girl, was she?

I say bring on the shock and bewilderment. It keeps me on my toes. Especially when I’m in work and a naked Minnie pops up on my screen.

Minnie looks very good to me, GB, I even felt a little twinge...erm...I like 'em lean and mean :) on the second pic, is that a flying turd in front of the gorilla? No, not Mr Lutz, in between him and your relative poking his tongue out

I say keep the loin cloth. If Tarzan's donger is flopping around for 90 minutes, that could get a little distracting.

I thought the "kitty" picture was creative yet cheeky at the same time.

Scarlett: Haha, Miss Scarlett! I hope Minnie made a good impression on your new workmates!

Joe: I'm glad someone likes it! Minnie's body I mean, not the turd. Although it looks a bit woody for a turd.

Dr Ken: A bit of twine could hold it firmly in place.

Cocaine Princess: The view from the other side might have been more cheeky, Miss Princess.

Ouch. That could pinch his Tarzan business. Let's just stick with the loin cloth.

Maybe he wore it because he felt modest with all his buddies having those giant gorilla schlongs.