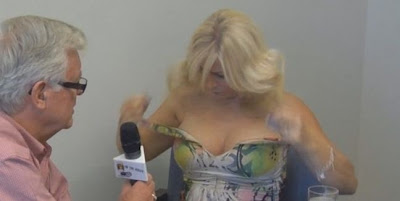 The mayor of a Canadian town has been interviewed by a woman who bared her breasts mid-way through the discussion. Apparently, it’s legal in that part of Canada for women to expose their chests wherever and whenever men are allowed to do so.

I don’t have much sympathy for the mayor. It seems that his interviewer wanted him to accept her boobs as everyday objects you could pass in the street without craning your neck or howling like a wolf. The only counterargument he could offer was that some people might find a topless woman “distracting”. This feeble response allowed her to assert that the mayor’s earlobes were distracting and ask him to wear ear muffs. The mayor was left floundering by this facetious suggestion.

When I told the manager of the safari camp about this story, he said:

“The mayor should have put his face between her tits and shaken his head like a cocktail mixer. Then he should have asked her how many women had ever felt like doing that to a man’s chest.”

I thought he had a point, even if the course of action suggested would have been undignified for someone in a position of civic responsibility. A man’s bare torso will never be in the same league as naked jahoobies, no matter what the law says. However great the pecs are, no woman ever got an erection from leering at them. Even ladies who find such sights stimulating can keep their symptoms tightly under wraps. In any case, my buddy Smacker Ramrod once told me that good girls don’t get sexually aroused until you’ve bought them dinner and whispered sweet-nothings into their ear.

Having said that, one has to admire the woman for skilfully deploying her assets in a daring surprise attack. It’s a tactic that ought to be added to the debating manuals, as well as geo-strategic directives on the use of soft power. I must remember to invite her to our next jungle symposium on the use of display tactics to disorientate potential adversaries. I’m sure most of the delegates would give her a big hand.

The female bosom has its philanthropic uses, of course. Consider the case of the French nurse who posted the following advertisement on a classified site:

”I am a young mother in perfect health, a trained nurse of 29, and I am renting my breasts to milk-feed infants.”

She is looking for a gay couple to hire her services for 100 euros a day. That’s not a lot of money for milk fresh from the teat, with all the associated nurturing of a surrogate mother. Not all the enquiries she got were from gay men with babies:

“I’ve received more than a dozen requests, but only half of them were serious,” said the nurse. “The rest were from perverts.”

Tut tut. Nothing is sacred if a lactating woman cannot advertise her services without being pestered by perverts. I hope she puts their replies in the public domain, so the world can pour scorn on their depravity. 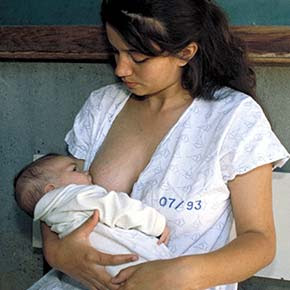 Comments:
I think a similar controversy arose when women first began showing the calves of their legs. I have no problem with them going topless if they want. They can look at my ear lobes, I'll look at their boobs. If they want to nuzzle my ear lobes, I'll happily return the favor.

I think the men(?) who replied to the nurse's ad wanting to hire her for reasons other than the ad advertised were more rude than perverted. And of course, rudeness should always be scorned.

It's funny how violence in movies and television is more accepted than the human form. European television regularly airs nudity, but slip a nipple on American television and everyone loses their minds.

Showing dead babies on TV = Awesome!
Airing a side boob = You crazy!?

The mayor should have offered to get his ears pierced if she'd agree to do the same with her nipples.

Seems like the men can't win on this one. When they ask women to cover their bosoms they are oppressive sexists. When they ask them to uncover them, they are perverts. Is there some sort of middle ground the male humans could retreat to in order to work out some sort of compromise on this?

I hate when women just whip 'em out. It takes all the mystery out of it. What about the begging? What about the expensive meal? Make me work for it, baby.

If you use pervert bait, you're going to net a lot of perverts. Duh. And, I'm sorry, but I don't like to see women breastfeed. You mean those aren't my personal playthings? They're food?! Oh, for fuck's sake. I have to go lie down.

David: Hah, nuzzle! Is the nose an effective boob caresser in your experience? As for the rude/pervert question, don't we need to read their replies before deciding?

John: Does the gay/boob nexus make you feel giddy?

Steve: Yes, that would have been a witty riposte, if not exactly apropos.

Jimmy: How about women can bare their breasts if men can shout "booby yum yum!" whenever they do so?

Exile: That's what Paul McCartney said about Heather Mills breastfeeding and it cost him 30 million bucks. Would you feel entitled to talk dirty to a woman who had shown you her breasts?

I have often thought it ridiculous that a man can walk around topless but a woman can not legally do the same.
Especially since some of those men really need to be covered up. Badly.

with cable tv and the internet, a bare breast ain't the treat it used to be. lucky us.

Goddamn it...I'm going to send my sons a bill for the 2 1/2 YEARS those little vampires nursed. I will not, however, charge them interest...because I'm a good mother.

That was hilarious to watch. He livened up when she exposed her boobs. Then they both tried to act composed. She succeeded.

Sometimes if you've got a heavy object to move, it's a good idea to toy with it first before you begin the heavy lifting. So yeah the nose is sometimes an effective toy.

The pervert question? Yes you are right! How about posting the replies (if you can get them) with one of those poll thingies. We can vote yea or nay as to the question of is he or is he not, perverted. Then you can post a poll on the readers' answers and we can vote yea or nay if the reader is perverted. See, I'm just curious how many perverts are reading your blog. :)

Ruth: I agree that moobs should be covered up, Ruth, but is disgust as disruptive as lust?

Billy: That's true, Billy, but people still go to sporting events they can watch on TV. Isn't being there an extra thrill?

Megly: You suckled for 2.5 years? Wow! You deserve a title for that, like 'Your Boobaceousness'.

Robyn: The earlobe thing definitely flummoxed him. Do you think he should have had a beer with her, out of politeness?

David: I wish the woman had published the replies, David. They'd be in French, so some of the pervertedness might be lost in translation.

I think the manager of the safari camp has a good point. Infact, that should be a regular greeting to help break the ice between strangers. x

Can't see what all the fuss is about. You just need to go down to the river bank here of a morning and all the women have their tits out beating laundry on the rocks.

I'm too old to get excited about all that now so prefer whisky on the rocks.

Women can be topless in the province I live in.

I guess in Canada some women do not want to leave anything for imagination.
Breast feeding is something totally admirable.

If the lady who had interviewed the mayor had seen these moobs, she wouldn't have been so keen to have gender equality in being bare-breasted http://seekmedicine.com/hangout/faking-news/6-tushar-kapoor-becomes-butt-of-all-jokes-who-officials-annoyed

Oh GB...I often feel 'stirrings' when I see a handsome man strutting his man boobs out in public. And if you would show me yours I would likely motor boat them. If you asked nicely =)

If she was warm, I would have invited her to take her entire dress off. And tell her she could keep interviewing me for as long as she wanted.
I'm a friend of the press that way.

Scarlett: I wouldn't go that far, Miss Scarlett. There are bound to be women who would take offence. Some of them might be strong enough to suffocate a man with their bust.

Hippo: That's true. Boobs become de-sexualised if they're permanently exposed. Gravity might also be a factor.

Cocaine Princess: What an enlightened part of the world you live in, Miss Princess. I hope it's a right that women exercise with due caution.

Munir: Yes, you can't help but admire a breastfeeding woman. It's a powerful statement of being proud to be mammalian.

Doctor at large: Some women might be jealous of those moobs. Or is that the point you were trying to make?

Auri: Dear Auri, what a pleasure to hear from you! I regret that my ape chest is too firm and unyielding for that kind of activity. But many thanks for the offer!

Al: She's too canny to expose herself to regular Joes like you. She might invite you to play strip poker, though.

Read a lovely line once "There's something disgusting about a woman who can drink a beer, give you the finger and breastfeed at the same time."

Boobs aren't that distracting when everyone has them out. Having attended a few summer hippy fests, the scrotums are far more interesting in their diversity than boobs. Maybe that's just because I'm a girl. Dunno.

And good on that interviewer!

Hello and welcome, Sarah. Do you really prefer those wrinkly sacks to boobs? You must really be a man's lady!

Not all the enquiries she got were from gay men with babies:

Theres money in breasts you know.