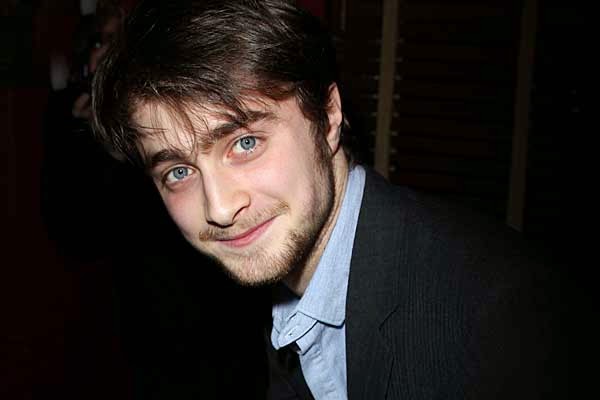 Does anyone feel sorry for Daniel Radcliffe, the Harry Potter actor? Okay he’s a millionaire, but millionaires can suffer. Do they not bleed if you prick them and smart if you tweak their noses?

When he was a child, he was an idol for millions of pubescent girls who dreamt of being his wizardess, to say nothing of countless full-bosomed women who yearned to smother his head. But those days are gone. Growing up, for Daniel, has been a painful transition from fresh-faced and boyish to bushy-eyebrowed and gnomish. Money is no antidote to the ravages of time.

Daniel is putting a brave face on his metamorphosis. He has starred in a handful of non-Potter movies, which were well received, although few people have seen them. And he recently informed Elle magazine that he’s taken to sex like a squirrel to nuts:

“I'm one of the few people who seem to have had a really good first time,” he said. “I'm happy to say I've had a lot better sex since then.”

Reading between the lines, you can see that he’s immensely proud of his copulatory deeds. His well-wishers should be pleased that he’s added to his toolbox since his Harry Potter days. However, most of his groupies still think of him as the former boy wizard. The actress Jennifer Lawrence, a girlhood fan of Harry Potter, admitted to screaming in excitement when she saw Daniel. Her enthusiasm fizzled out after they met, so a scream is probably all he got out of her.

Is Daniel wise to extend his acting career into adulthood? Maybe he should have followed in the footsteps of Shirley Temple, who became an ambassador. He would have certainly gone down well as Her Majesty’s emissary to the Congo. Wizards are feared and respected over here, and his face resembles a native species of owl. The local women would have shaken their booties at him before presenting him with a tribute of small rodents. He might well have become a celebrated figure of international diplomacy – “The Owl of Brazzaville”, we would have called him.

A career in entertainment is an unpredictable journey – some artistes are destined to be child stars who go no further, whereas others continue to perform in old age. I was delighted to hear that my friend Joan Rivers, whom we gorillas revere as a Great Earth Mother, recently officiated an impromptu gay wedding ceremony. Although marrying people isn’t technically show business, anything involving Mother Joan is bound to be a stand-up routine.

“It’s been so long since I had sex I’ve forgotten who ties up who!” she quipped.

When I told the manager of the safari camp about this auspicious event, he said:

“Not a fag hag, but a fag yenta,” I corrected him.

The manager is too ignorant to know the correct term for a Jewish woman who marries a gay couple. He is lucky to be acquainted with a learned gorilla who can educate him. 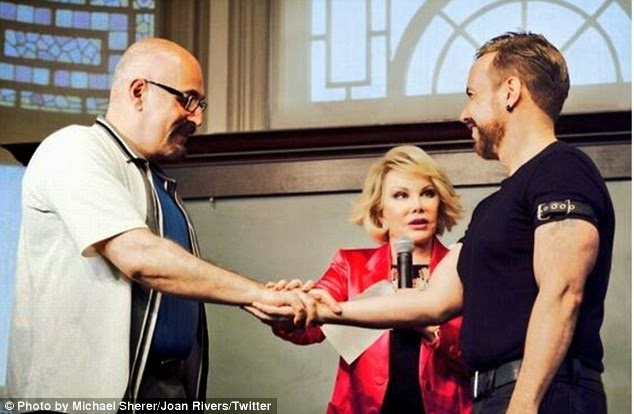 Comments:
I thought he'd hung up his wand for good

You're an exceptionally sophisticated gorilla, my friend. Joan is the oldest yenta in the history of my people. She's pushing 200 now, right?

I laughed at your description of Radcliffe's face. He really does resemble a native species of owl. He "seems" to have had a good first experience. That's an odd way to word it. What do you suspect he means by "seems", GB? Did it seem to go in the right way? Did she seem to yell in ecstasy vs agony? Did he seem to light a cigar afterward?

I would love to ask Mr. Radcliffe how many licks it takes to get to the center of a Tootsie Pop.

I love Joan! As for Harry Potter talking about doing, it's like, come on. Everybody screws someone eventually. BFD. Shut your dumb witch-boy face.

Interesting that Daniel announces that he had a good first time. That's great. But what of his partner. There is no mention of whether the target of his wizard lust was also fulfilled. Or is his right hand just being extremely coy?

So, our young wizard has learnt to use his wand better... Maybe he's on track to growing the longest beard ever so he is ready to take the place of Dumbledore and gather a magical harem.

Let me tell you something about Radcliffe (if I can be serious for a moment); that guy has an astonishing work ethic. He's been in three Broadway shows that all hinged on his participation. Guess how many shows he missed in all three runs? Zero. Nyet. None. Not one. Not even the crappy Wednesday matinees with the blue-hair ladies. He said he owes it to the paying audience and his fellow actors to be there every show. I find it admirable for someone of his stature to work that hard.

Well, I guess if Elle magazine is interested enough in Daniel to wanna know what he thinks, that's a good sign for him, right? I am kinda confused about how Joan Rivers is now marrying people. Don't you have to have some qualifications, or something to do that? Or was there some episode of the Love Boat I missed where Joan took over the helm when Captain Stoobings passed out from eating some tainted Alaskan King Crab salad, and she absorbed all his Captain-ly powers?

Nota Bene: His wand is probably better hung than it's ever been.

Robyn: Joan is ageless, Robyn! That's what regular plastic surgery does to you. It's possible "seem" is British modesty. Or maybe he can't quite remember what happened.

Chris: What makes you think he knows the answer? I think it depends on how warm your tongue is.

Dr Ken: I think he wants people to know he's getting better at it, Dr Ken. Does everyone get better at it?

Steve: Right hand? Surely he must have learnt how to use his left hand after lying on his arm to make it feel numb?

Jules: His facial hair may be bushy, Jules, but I'm not sure it's capable of length. I think he may be stuck in hobbit/owl mode.

Exile: I'm delighted to hear you speak so admiringly of a millionaire! Is that a first? I didn't realise he was such a trooper and you're right to praise him for that. Maybe he's really going places!

Jimmy: I don't know what US law requires, but in Hollywood movies couples who want to get married usually look for a Justice of the Peace (whatever that is). Joan couldn't be one of those, could she? Also, don't forget the couple was gay. Gays may have their own parallel marriage system.

Joan Rivers the "great earth mother!" I must confess that it makes sense to me! second: I am not a wealthy primate but I am pretty sure I could get someone to groom my eyebrows for an affordable price! My barber does it every time I go get a haircut.Great blog! Keep up the good work!


keep it up danny boy!

idle wands are the devil's playthings.

Doesn't everyone get better after their first time? I would hope so.

At least he didn't go the heroin and suicidal supermodel route. On that note he's better than me.

And thanks for the term "fag hag." I haven't heard it until now and it's my new Favorite Thing!

I think it is commendable to know what wonderful work ethic young Radcliffe has. Personally, I think he is handsome. But that is my opinion.

I feel sorry for Daniel because he's short, but I still love him for being Harry Potter and I always will.

Drake Sigar: Who he? Ah, young Darth Vader! Did he get typecast?

Mohave Rat: Your barber is a treasure, Mr Rat. I hope you tip him generously.

Billy: I'm sure he'd love to follow your advice. And maybe he is!

Mary: So would I, Mary. Maybe someone who injured their pelvis the first time wouldn't improve.

Scott: I'm glad to have introduced the term to you, but use it with discretion. Fag hags are bitchy by nature.

Rose: You're not the only one, Rose! I was being a little harsh on his handsome owl-face!

It is a "portent from the gods" that we both wrote about Shirley Temple today! Daniel Radcliffe should consider following in her footsteps as an ambassador, although he would be a big hit at children's parties dressed as an owl. How nice that Joan Rivers is a close friend of yours, and I'm impressed how you've mastered Yiddish in the jungle. You are always full of surprises, Gorilla!

"bushy-eyebrowed and gnomish" hahahaha! So he's a sex manaic and a borderline alcoholic - he's starting to look like someone fun to hang around with! x

Millionaires may bleed if you prick them (Daniel may not mind a casual prick every now and then, but I digress...), but they can afford health care.

I'm a big Harry Potter fan - don't judge me. I always thought Daniel was the the worst actor on the set (albeit among some outstanding performers). Interestingly, in the adult roles since Harry Potter, his acting has improved.

Glad to hear he's not going without in the rumpy-pumpy department!

Hi GB, are you sure that's Joan Rivers and not Jocelyn "cat woman" Wildenstein? Also, with all her face-lifts I'm surprised she hasn't got a beard yet. One more lift and she'll look like Conchita'

He still reminds me a bit of a bushier Elijah Wood. He could be the next ambassador to Mordor.

Of course he is proud of his copulatory deeds. The realization he's got a magic wand after all (bushy as it may be) does that to a former wizard.

If Daniel grew up to be better looking things would be different.

Julie: Dressed as an owl, Julie? I suppose a pair of wings and a nose job would increase the likeness. I picked up a few Yiddish words in the circus - it's not widely spoken in the Congo Basin.

Al: They can indeed, although Britain provides free medical care for millionaires if they'd rather spend their money on horses and women.

Bryan: So you've seen his non-Potter films, then? I'm glad to hear he's improving as an actor as well as a rumpy-pumpist!

Joe: I've just looked at pictures of Jocelyn and they're quite disturbing. Joan is surely better looking than that.

Young at Heart: Yes indeed, ma'am. I wrote a post about my last encounter with Joan.

Ninja: Yes, there is a resemblance, although Elijah is more elfish than owlish.

Blue G: He should keep it in his pants if it's bushy. Not even apes have bushy ones.

Fredulous: Yes, he'd star in more romantic comedies, although a lot of women seem to like him as he is.