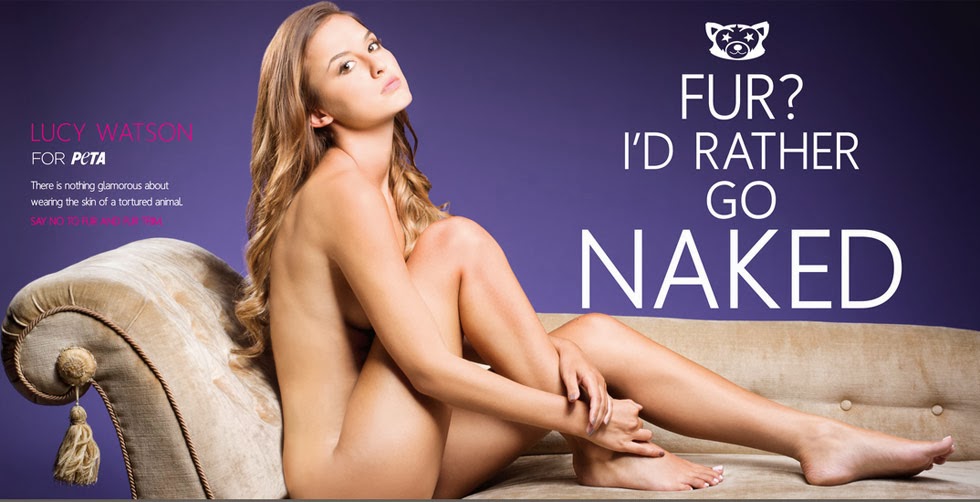 The manager of the safari camp is highly agitated about an actress called Lucy Watson, and thinks I should share his excitement.

“She’s taking off her clothes to protest against the fur trade,” he explained. “Aren’t you grateful that a gorgeous woman is exposing her body to protect furry animals like yourself? I’m grateful and I’m not even furry!”

“I am hairy, manager, not furry,” I replied. There’s a profound difference between the two. My fine body filaments are not suitable for making coats. The fuzz beneath your armpits would do a better job.”

“That’s just splitting hairs!” guffawed the manager, delighted with his own wit. He sauntered off with a big grin on his face.

Now what of Miss Watson? Her justification for appearing on posters in a state of undress is to inform the general public that she’d rather be naked than wear fur. It’s a preference that does her credit, but I doubt it will change many minds. Off the cuff, I can think of two groups of humans who would pooh-pooh her notion:

(i) those who live in cold climates;

(ii) those who have saggy bottoms.

The former will find her argument fatuous, while the latter will view it as smug and conceited. And let’s not forget men like the manager of the safari camp, who will ogle the poster without any real concern for the issue. I fear that displaying her naked body is more likely to harden opinions than win converts.

The plain fact is that you can’t credibly protest against skinning animals without expressing support for alternative fabrics. Making a fetish of nudity won’t do. If Miss Watson wants to nail her colours to the anti-fur mast, she should wear acrylic instead of running around naked. The Velcro vixens of the ‘Dykes on Bikes’ movement are doing more for the cause than she is.

The grey area between fur and man-made fabrics is wool. Is it wrong to shear sheep against their will? Although they don’t appear to enjoy it, they must feel better afterwards. If I were encased in a thick coat of wool, I would happily allow a beer-guzzling Australian lout to shave it off. Sheep are simply too stupid to know what’s good for them.

Fleecing sheep when they get too shaggy may be ethical, but it goes without saying that they shouldn’t be molested in the interim period. I was sorry to see a news report of yet another hoary old pervert who’s been arrested for sheep abuse. The judge had to scold the jury for giggling at the flustered witnesses who testified against him. You don’t appreciate how disturbing such incidents are until you’ve seen them with your own eyes.

The existence of men who find sheep sexually attractive is an enduring puzzle. Some say that the hindquarters of a ewe are seductive when she trots across a field, but I think her bleating is a likelier explanation. One has to pity a creature that can fake orgasms without intending to. 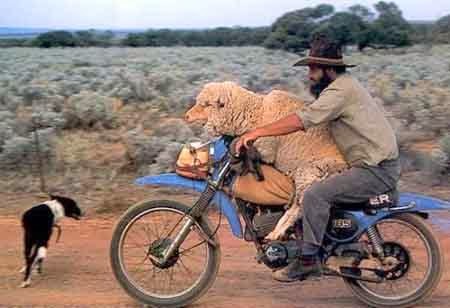 Comments:
I live in a cold climate and I heartily endorse her desire to go naked.

I've always thought the people taking off their clothes to protest things are just looking for an excuse to be naked in front of other people. It's just a strange way to protest.

But, how to bears and beards feel about the subject of shorning? I say we call up Harvey Fierstein and Nicole Kidman and ask...

Obviously she is drawing attention to her cause!

I'd rather wear Lucy Watson than wear fur but I don't think proclaiming that will help her cause...

I don't know this Lucy Watson but she's really pretty. Girl next door type, which always the death of me.

Peta has the worst PR people on the planet. This is a mild campaign but most of them are confrontational They do more to alienate people from their cause then anyone.

Al: Do you have a saggy bottom as well? That would make your endorsement even more valuable.

Memphis Steve: I think it's a way of saying "In your face". Obviously that doesn't work as a protest for people who want it in their faces.

HermanTurnip: I didn't know Nicole Kidman was a beard! I assume you mean for Cruise and not the current guy. I don't see why it would affect her views on fur, though.

Rose: Her cause and other things, Rose!

Steve: You're right, it wouldn't help at all. Maybe if you dressed up in gimp suit something would be achieved.

well it's about time an attractive woman shed her clothes for a cause. i've got up early to watch naked protests many times and have been bitterly disappointed in the appearance of most protesters.

One thing to strike a modest pose in a studio, quite another to stroll naked down Oxford Street. These girls just don't think it through, do they?

If anyone's mind was caused to drift into sinful thoughts because of the first half of this post,... any of those notions were surely quickly squashed by the unwholesome images conjured up in the second half of the entry.

The message I'm getting from Miss(?), Ms.(?), Mrs.(?), shit, Lucy Watson is she had rather go naked if it is not too much trouble. I would be much more impressed if she had done a full frontal.

I find the sheep fetish bewildering too, GB. Do you think they might actually be wolves in sheep's clothing? Cuz that would make more sense to me.

Good point about the saggy bottoms (and other saggy parts). I sure hope no one tries to prove you right.
Never gave sheep sex abuse much thought. You might be right about the sounds. Most humans probably never even want to talk to these perverts.

Clothes? I'd rather go naked.

I love to wear fur and believe me, I don't have a saggy bottom & I live in a cold climate.

I do applaud people for sticking to their beliefs-- if you don't want to wear fur that's fine but don't condemn or criticize those who do.

Billy: Maybe only the blubbery ones can bear it, Billy. You've got to be built like a walrus to be naked in your climate.

Hippo: Right, Oxford street is a lot more crowded. Much harder to get a good look there!

Jimmy: If an evil wizard turned Lucy Watson into a sheep, would you speak words of comfort to her, Jimmy? And protect her?

David: She's teasing us, David. You're not too old to be teased, are you?

Robyn: It would teach their abusers a good lesson if they were, Robyn. Some love bites are fatal!

Bill: Yes, a known sheep abuser would certainly be sent to Coventry by everyone but his fellow sheep abusers. One could only guess what their thoughts were.

Cocaine Princess: Those who say it involves cruelty to animals are never going to stop criticising and condemning you, Miss Princess.

Maybe she will read your blog and realize what happens to sheep when they tease.

Mrs. Penwasser says I have no bottom.
Which is probably a reason my trousers keep falling down.
And don't you know that makes people at church pretty cranky.

Hahaha, I might start a "Fur? I'd rather wear these hideous CROCS" movement to drum up support. x

I only live up the road from Tottenham (site of the attempted ovine penetration) and I have never seen any sheep (or cows) anywhere even close to those environs since 1760. A very good year, 1760...

Sorry, I forgot my point! Ahem...I think the Daily Mirror makes stuff up. So there. Have at you, filthy kebab wrapping of tomorrow!

Gorilla, of course I would. There is usually a way to break the spell, and turn her back into Lucy Watson. Then she would owe me big time.

After a couple of weeks camping in Dorset last summer, I'd dispute the claim that a sheep's bleating sounds like a faked orgasm. I was surprised to learn they don't sound as one usually supposes, based on received wisdom (a sort of staccato "Meheheheheh"), but more like someone standing on a box shouting "AAAARGH!" (Which has not been my experience of faked orgasms, of course I'm assuming they sound alike.)

David: I would be very proud if reading my blog saved anyone from being abused like a sheep!

Al: Is no bottom better than a saggy one? What would Mrs Penwasser think?

Scarlett: No one will take you seriously if you talk about footwear, Miss Scarlett. Not unless they have furry feet.

Carol: But the case went to trial, Carol! You can't expect to be an eye-witness for every act of debauchery that happens on your doorstep.

Mnk: Orgasms are faked in different ways, especially by people with different mother tongues. "AAAARGH!" could well be the sound of a real orgasm.