Someone is trying to make a killing by selling a “sex tape” of Justin Bieber to the highest bidder. I wouldn’t give a nit in my arse for it. It seems that Bieber was secretly filmed showering Australian strippers with cash before spanking their bottoms and licking their nipples. That’s barely even embarrassing compared with his other recent exploits. What Bieber should do now is re-enact the incident and put a video of it on You Tube. This would make the illicit tape worthless and earn him respect for taking a stand against immoral profiteering. No one should make a fast buck just because Bieber cavorted with strippers. No one apart from the strippers, that is.

Bieber has been criticised for his conduct by a media insider called Bonnie Fuller, writing in the tone of a big sister scolding her errant baby brother. The gist of her argument is that spanking and licking strippers is sexist behaviour that degrades Bieber’s female fans. I’d like to hear the strippers’ side of the story before endorsing this opinion. They might have enjoyed the acts for which they were so handsomely compensated. There’s no point complaining about sexism if everyone is having fun – it just makes you look like a killjoy.

Ms Fuller also advises Justin to remember his courtship of Selina Gomez, a girl he was supposedly in love with. What good would that do? He probably regrets not licking and spanking her when he had the chance. You can’t turn back the clock and expect Justin to behave like the puppy-loving boy he was before he got jilted. The most romantic thing he would do now is launch a raid on the Playboy mansion and steal Hef’s floozies. It’s a mission of mercy that would have my full support.

What these well-meaning critics don’t understand is that Bieber’s brain is currently located in his pants. Maybe it will return to his head in due course – or maybe he’ll become another Bill Clinton. It has recently been alleged that the ex-president had an affair with Liz Hurley during his White House days. He has wisely refrained from denying the rumour, which would have been taken as proof of its truth. I wonder if Bill also had a heart-breaking adolescent love affair before he began his long career of shagging anything in a skirt. He and Bieber could then establish a man-whore support group for former jilted teenagers.

Romance may be dead for Justin and Bill, but it lives on inside the English kitchen. I refer to the case of Donna Musk, a 45-year-old Leicestershire woman who refused to cook a potato because it was shaped like a heart. It seems she wants to preserve it as some kind of love token from the god of the root vegetable.

“It's upstairs in my bedroom sitting on a pillow,” she revealed. “I don't know how long they last for but I'm keeping it really dry.”

Happy Valentine’s Day, Donna, but don’t expect your spud to turn into a stud. 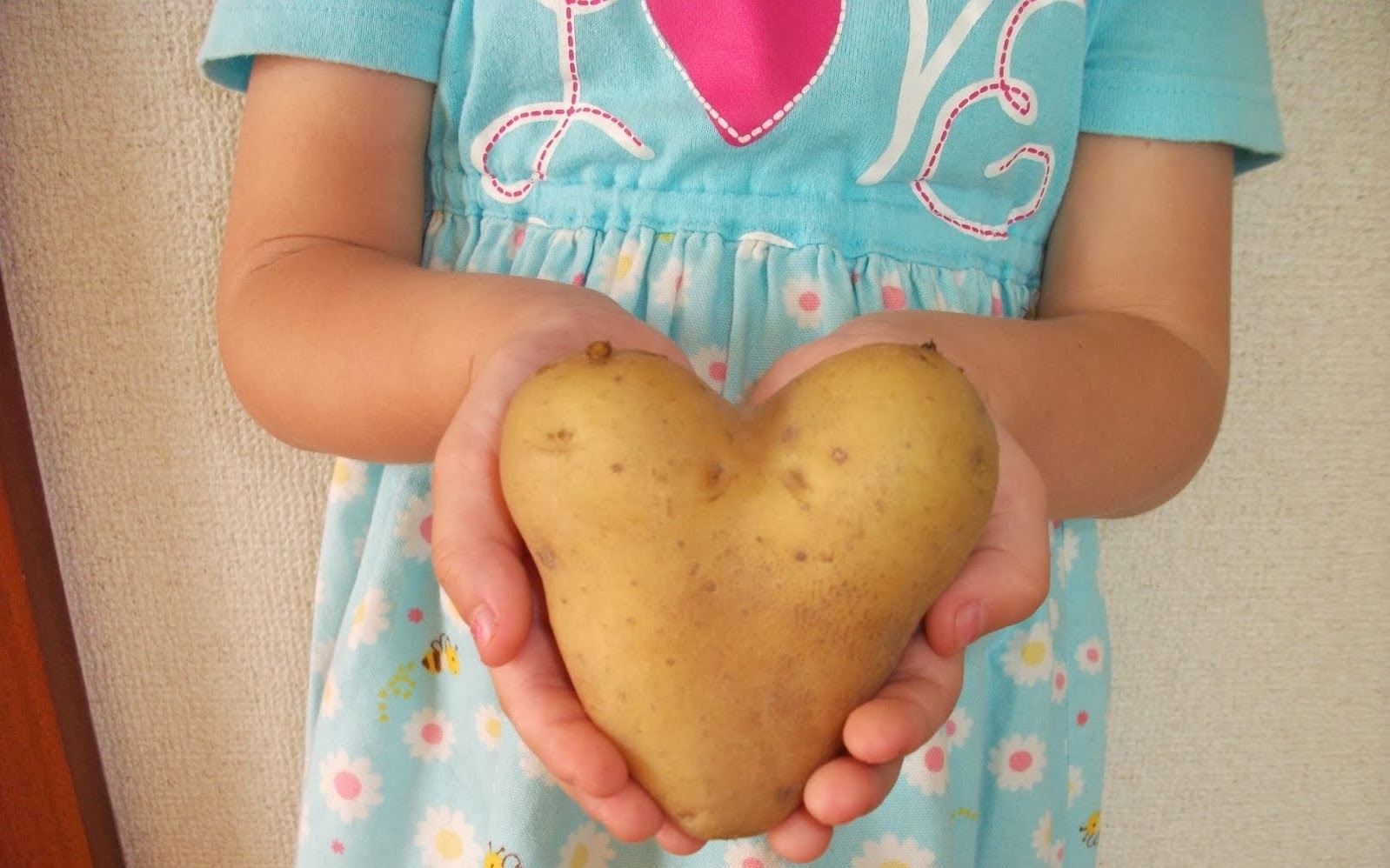 That spud looks more like a pair of boobies to me. Biebs would probably enjoy suckling on it.

every one's raggin on the biebs. if i was his age with $100 million bucks i'd be just as wild, maybe wilder. why bother chartering a jet if you can't smoke a reefer on it?

What's funny is that, given time, he'll self-destruct. The money isn't always going to be rolling in. We can all just sit back, relax, and enjoy the show. And, I'm sure, somewhere in this wide, wide world, Macaulay Culkin is rubbing his impish little hands together, just waiting for the day when he can say "I told you so!"

In a kind of grotesque way, both these guys remind me of babies at the breast. And actually it is just their physical appearance that seems different. Both have the same look on their face as infants do.

As for Ms. Fuller, she should mind her own business. But of course if she did that, she probably wouldn't have any business.

Hippo: We gorillas eat our nits, Mr Hippo. It's waste not, want not in the jungle!

Robyn: Well spotted, Robyn! I don't think the texture is quite right though. Can potatoes be soft-boiled?

Billy: How are his fans reacting, Billy? Those bucks won't roll in forever.

HermanTurnip: I feel sorrier for Culkin than Bieber. At least Justin is having fun before he self-destructs.

David: Yes.. it's a good thing those breasts are full of something other than milk. Would such acts be legal with a lactating woman in your part of America?

Cro Magnon: Don't be so pessimistic - he might find religion or join the circus.

Steve: You might have been right 3 years ago, but he's recently been educated by some highly paid courtesans. The 30 second duration may correct, but it's pure speculation at this stage.

I think that potato is going to go soggy, saggy and limp and leave a smelly damp patch on her pillow...

The boobs in that top pic are gross. I find implants, especially bad ones like that, a complete turn-off. Not that anyone is asking for my opinion but since when did that stop me?

Any boy that age thinks with his dick. You can hardly fault him because he's got multi-millions at his disposal. I'm not sure I would have acted any different.

Speaking of boobs, do you see a pair in that spud or is it my overly-active imagination?

Bieber’s female fans should have expected no less from a snot-nosed teen with raging hormones. Too bad his IQ is such a low number, but not nearly as small as his penis according to Selena Gomez. Selena should know, she's seen Bill's to compare to. The dirty old pervert can't help flashing all the girls. How do we fool thee? Let us count the ways that illusions play with our hearts and minds. Perhaps Ms. Musk would be willing to part with the potato when it begins to rot--just like all illusions of love do.

Kissing some stripper boobs? That is no crime. Now, when you're a minor and driving under the influence of alcohol? That's bad. Kissing an inmate is also bad. Kind of hope that's happening right now . . .

Can we start a whip around as to when Bieber with self-implode? x

You pose an interesting legal question. Of course it is legal for infants. I haven't seen women feeding their children openly in recent years but when I was a boy it was common for women open their dress front in church and feed their infant.

I suppose the legality of the act would depend on the sucker's (oops), imbiber's age.

Bieber is kind of young to be cynical enough to give up on love. Though maybe I am really the one being naive. Perhaps Bieber is better off spanking strippers now, when they don't mind it so much, than waiting till he looks like Charlie Sheen.

Nota Bene: I tend to agree. She'll have to inject it with a stiffening agent.

Exile: Yes, they look horribly unnatural, as if they've been inflated with a bicycle pump. It's not your imagination, that spud is clearly suffering from booby envy.

Static: I can tolerate the insults to Bieber and Clinton, but not to the potato. However much it rots, its character will always be blameless.

Dr Ken: He deserves a prison sentence for his reckless driving, but surely they'll give him his own cell? I don't agree with throwing Bieber to the wolves at this stage.

Scarlett: Some would say he already has, Miss Scarlett!

David: Did you know any of the ladies who breast fed their babies outside church. I'm wondering whether they belonged to the United Daughters of the Confederacy or some such organisation.

Jimmy: The film Pretty Woman teaches us never to give up on love, Jimmy. Maybe Bieber will end up marrying one of the strippers he's spanked. Do you think it's possible for a woman to love a man who has spanked her?

I don't even want to talk about that trumped up little diva.
So let's move on to Clinton. Well of COURSE he wouldn't deny an affair with miss posh totty Hurley! Who would?

A heart shaped potato. What will she do when it starts to sprout?

Anything is possible these days, Gorilla.

funny but, i'd keep that potato as well...the heart-shaped spud looks more like upside-down boobs!It's even got nipples! GB,I think I need therapy

GB, we'd like to invite you to become one of our Authors in Alexandria. This invitation has been extended to you by email as well.

In addition to posting on anything you wish, as you desire, you may of course mirror posts you've already written from here or elsewhere to gain a different or additional audience or for any other reason that appeals to you.

If you think you might be interested, contact me through Alexandria or by return email via this comment and I'll forward our formal invitations for you to look over and return if you decide to proceed.

Come contribute your perspectives and opinions to the ongoing conversations there or, even better, start some new - and different - ones of your own.

I look forward to hearing from you.

I would let Justin Bieber spank my bottom and lick my nipples for a few thousand bucks. Heck, I'd let any pop idol do that. I don't discriminate.

As for the Biebs, I kind of blame his entourage, they appear to be enablers as they aren't really doing anything to stop/help him. Instead they're just partying right along beside him.

Perhaps his mentor Usher needs to take control of the situation.

Of course the women who breast fed in church, beast fed out of church. I just paid more attention to it in church because there was nothing else to do. And like most 10 year old boys I didn't have a lot of interest in breasts.

Maybe some of the young women in town belonged social clubs but they were outside my social class. I picked cotton barefoot because I had one pair of shoes and they were for school and church on Sunday.

Juliette: Good point, Jules! I'm sure even YOU wouldn't deny having had an affair with Ms Hurley. I'd think you were very cool if you had!

Jimmy: Indeed - what an age with live in! I thought you might be able to cite a relevant example, but I won't press you!

H M Stuart: Thank you, H M Stuart, that's a very generous offer. But having looked at your blog, I don't think I'd quite fit in there. I think you're looking for writers with something serious to say!

Chris: That's a very practical attitude, Chris, but don't you have any red lines? How about a rapper?

Cocaine Princess: Biebs does need someone to take him in hand, but it's not easy for employees to challenge the behaviour their employer. The problem is that the law says he's an adult when he isn't.

David: You really picked cotton, David? I bet the ladies in the plantation house were Daughters of the Confederacy! Did they ever give you a glass of iced tea?

Yes Gorilla, I really did pick cotton. Quite a lot of it actually. In my early teens I could pick 200 pounds in a day. They didn't give me tea, they paid me five bucks.

If given a choice between Miley or Justin, of course I'd choose Miley.
I'm not into dudes, you know.

David: That must have been character-building, David. I hope no one ever called you a cotton-pickin' so-and-so!

Al: Miley is not currently into dudes either, so you'll have to settle for Justin.

Ah, but Bananas...the potato will rot -- as all good things must come to an end.