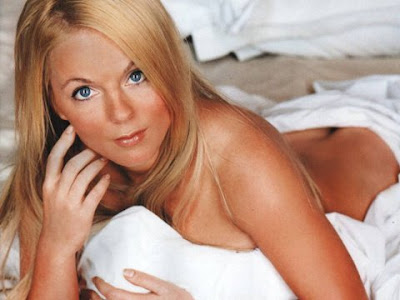 Poor Ginger Spice is suffering from insomnia. She tweeted this news to her army of fans, who promptly tried to bore her to sleep with their inane suggestions. I refrained from tweeting anything myself. If Ginger wants my advice, I’ll be more than happy to give it to her, but she’ll have to ask me first. I’m not adding my pearls to the chorus of ill-informed chirping.

Her sister-in-song, Scary Spice, recommended having sex as a cure for insomnia. That’s easy for her to say. I believe she has a herd of brawny-arsed stallions at her disposal, who can tire out the friskiest filly. I hope Ginger isn’t tempted to borrow one of those studs. It is better for a lady to make love to her rabbit than use a man as a sedative agent.

Ginger blames her insomnia on her hyperactive brain, which won’t stop thinking about one thing or another. It’s a problem that chimpanzees would solve by dropping a coconut on her head. We gorillas prefer more gentle remedies. If Ginger were currently residing with my tribe, I would gently swing her to sleep in my hammock, while humming the snake’s song from The Jungle Book. Not many women can keep their eyelids up while being rhythmically rocked by a crooning gorilla.

I wonder what Ginger can’t stop thinking about. She doesn’t seem like the type who is kept awake by cryptic crossword puzzles or ancient Sankrit texts. Maybe she’s brooding on the news that Victoria Spice has given up singing for good, which means that the Spice Girls will never perform together again.

It’s sad when illustrious careers come to an end, but such is life. I had similar feelings of regret when I took off my circus pantaloons for the last time. The important thing is to enjoy your leisure activities and keep looking forward to the next challenge. I returned to Africa to carve out a domain in the jungle. Maybe Ginger should return to Watford to carve out a domain near the M25.

Two ladies who must be looking forward to their retirement are the 70-year-old Dutch twins who recently stopped working as call girls. One of them admitted that her only client was an elderly gentleman who kept turning up for his weekly S&M sessions:

"I couldn’t give him up,” she explained. “He’s been coming to me for so long it’s like going to church on a Sunday.”

Having serviced over 350,000 men during their 50-year careers, they have saved enough money for a comfortable retirement. I hope they’ll treat themselves to a buff young gigolo from time to time, just to keep in touch with their former profession and offer constructive advice.

“Not too bad, young man, but you must show more initiative when I assume the doggy position instead of waiting for instructions,” they might say.

Don’t you love it when senior citizens pass on their wisdom to the younger generation? It’s what separates us apes from the four-legged mammals. 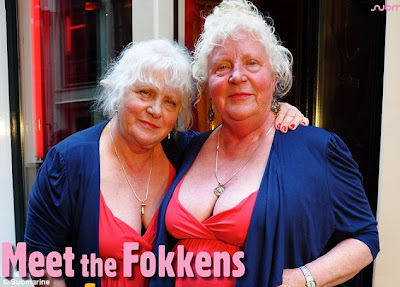 Comments:
You certainly keep my "Following" sidebar full of voluptuous unclad ladies - I suppose it's just by the grace of your phrasing order that the senior citizen sisters didn't become the entry's feature photo.

What wisdom would you most want to pass on to the next generation of erudite apes in your tribe? Besides the words to Kaa's Lullaby.

When I heard the Fokkens were callin' it quits due to arthritis, my motto became, "don't go celibate, get Celebrex"!

Ginger Spice is blaming her hyperactive brain? Ha ha! And people say she has no sense of humour!

Wow Gorilla, ya out did yourself this time. I wanna swing in your hammock.

I have sex...fall asleep, NO PROBLEM.
And, sometimes, Mrs. Penwasser falls asleep DURING sex.
So, it's win-win.

sleep disorders increase with age and ginger ain't getting any younger.

You have devastated me sir, devastated me. Are you sure that the Spice Girls will never again grace our ear-holes? Should Justine Bieber fall off his perch too I fear that the market for my patent concrete earplugs is going to simply dry up (unlike the ear infections that they cause).

Apparently the instructions in their Wills eschew the use of coffins in the event of their demise, detailing instead that they wish to be buried in simple fruit-flavoured body-condoms.

Kana: Your readers should learn to appreciate the womanly form, Kana. It's no different from admiring the paintings of the great masters. I teach young gorillas how to entertain their human cousins without performing feats that waste a lot of energy.

Keeping it real: I hope it will be a long time before you require such medication. Good to know their fame has reached North Carolina.

Steve: Don't judge a book by its cover - she's said some interesting things about sex education.

Al: That sounds like fun in a necrophile kind of way (see Rosemary's Baby). Does she wake up thinking she's been ravished by the Devil?

Billy: She isn't, Billy, but her condition should be curable with the right kind of attention.

The Owl Wood: While it doesn't surprise me that an old fogey photographer such as yourself should disparage The Spice Girls, one would have thought you'd show more respect for elderly courtesans who have pleasured men when steam trains were still running. I hope they will be buried in the Dutch equivalent of Westminster Abbey.

Well, the Spice Girls certainly have gotten a lot of mileage out of 1 good song. We bloggers have to write hundreds if not thousands of wonderful posts to get a meager response from the public, and these babes have legions of fans with seemingly minimal effort. Gorilla, life is just not fair.

Ginger can sleep just fine. It the attention she craves during the day time, so she invented Insomniac Spice.

ah. i know what Ginger is going through. i've been feeling the same way. i need a new challenge and hopefully i find one soon.

350,000 men!! Blimey. I need a rest just thinking about that. Mind you, they look bloody knackered.Clearly then this is the answer for Gerri - take over where they've left off and you'll be sleeping like a worn out whore.

I'll bet an S&M session with an elderly gentleman is about as invigorating as going to church on a Sunday. 350,000 men?! How comfortable can retirement possibly be with labia that stretches to the floor?

I couldn't post this comment from my morning coffee joint yesterday. It was tagged as a "known pornography web site" and blocked. So you're in good company.

Jimmy: Well, Jimmy, they're babes, as you said. One good song goes a long way if you're a babe. Some babes go a long way without any songs.

Scarlett: I never knew Ginger was in the snaring game. Which celebrities do you think she's after? I wish I could keep up with all the gossip.

Blue Grumpster: I think she deserves some attention. Ignoring her will only make the craving worse.

Jaya: I hope so too, Jaya. When are you returning to Malaysia?

Juliette: It does seem an unfeasibly large number, even for 50 years' work. Maybe they did a lot of gang banging.

Now was it 350K for each one or did they just added up the numbers?

Now this question will haunt me...

Ginger should try listening to some of her songs - they always send me to sleep...or coma, not sure which

S&M is like going to church on Sundays? Damn. I love Judaism, but I'm considering conversion now.

Ginger Spice was always the most vocal one out of the group but when she left the group her celebrity status diminished yet Victoria Beckham is still very much in the spotlight.

RE: It is better for a lady to make love to her rabbit than use a man as a sedative agent.

As for the 70 year old twins-- interesting surname!

Snoopy the Goon: I don't think it matters really - it's the difference between 10 or 20 per day. Once you get to 10, everything must become a blur.

Joe: I don't think she was cut out to be a solo artist. I liked her because she stood out as the ginger one.

Robyn: Isn't there enough saucy stuff in the Jewish faith, Robyn? I seem to recall a lot of begetting and begatting in Genesis. And the ultra-orthodox thing with the sheet sounds kinky.

Cocaine: That's because Victoria married Mr Becks, the famous footballer. His fame helped kick-start her new career in fashion or whatever. They also kept in the limelight by reproducing regularly.

Ginger is looking FINE in that pic. I find that an orgasm helps me sleep. Maybe she should be shagging more.

Instead of complaining about insomnia, use it to your advantage and spend the night working on something productive.

i'm going back for a visit next week but returning for good isn't in the picture anytime soon. maybe at least 3 more years here or in this region.

Dr Ken: That might work, or it might leave her wanting more. She's a woman, don't forget.

DWei: I'm not sure her hyperactive brain would let her do anything productive.

Jaya: I didn't realise it was so long-term, Jaya. Hope the place grows on you.

Al: Maybe you need to work on your role-play.

I don't think I'd hate giving her some attention. Good point.