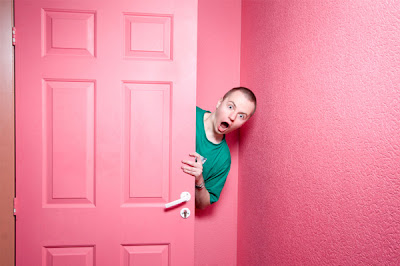 The Germans have come up with a clever way of reforming their hardened criminals. By incarcerating them in bright pink cells, they hope to curb their aggressive impulses and cultivate their fluffy feminine side. Critics of the policy argue that the convicts will feel humiliated, deepening their resentment towards society. It’s a fair point. Perhaps they should be given a choice between living in pink cells or being buggered with an iron poker. Then they could select the option which causes them less umbrage.

As a gorilla, I have a great deal of sympathy for humiliating punishments. In the words of Old Melonhead the Wise, “Tis better to humiliate a rival than bite off his goolies.” This is especially true in the world of homo sapiens, where humility is scarce and the quantity of bollocks is relatively stable. The guilty have nothing to be proud of, so make them feel humble to purge their souls. They can always regain their self-esteem by doing good deeds and learning how to knit.

Most German men have humiliation fantasies anyway. That’s obvious from their pornography, which frequently depicts submissive men being bullied by large, sexually voracious women. When Boris Becker impregnated a waitress in a restaurant, he made sure everyone knew about the short duration of their coupling, which apparently lasted no longer than 10 seconds. Is that the kind of detail an arrogant, macho fellow would share with the world? And let’s not forget Stefan Moses, the kinky photographer who showed people naked pictures of himself so he could draw attention to his puny appendage.

Some forms of humiliation are clearly below the belt, though. I thump my hairy chest in indignation whenever humans reveal the bedroom secrets of their ex-lovers. Remember the blonde actress Sondra Locke, the former on-screen and off-screen partner of Clint Eastwood? When she and Clint parted company, she wrote a book about their life together. Accorded to Sondra, Clint would say “Sweetie, did you floss?” whenever he wanted to have sex. This ugly revelation made everyone wonder whether Clint enjoyed licking a woman’s teeth during coitus. When asked to comment on the book he remained tight-lipped, possibly to avoid drawing attention to his own teeth.

The danger of jilted humans seeking revenge on their jilters has been recognised by Facebook, which has banned naked photos from its network. Also banned are pictures of urine, vomit, semen and ear wax. I think they’ve gone too far with ear wax. No one should be ashamed about what comes out of their ears, which is difficult to distinguish from guacamole in any case.

Semen is a more delicate question. One might argue that a man who allows a woman to get hold of his ejaculate should take it on the chin if she later displays pictures of it in Facebook. There’s no point crying over spilled milk. But what if she doctors the semen by adding pepper or cumin, to make it look nasty and unpalatable? It could ruin a man’s sex life. 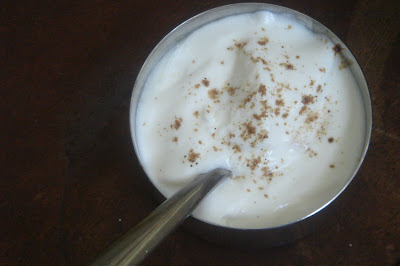 Comments:
Just visiting from Owl Wood's blog--re the bit about pink in prisons--that reminds me of an old study done in the US that determined a certain color named "Baker-Miller Pink" was supposed to calm unruly students etc. I wonder if the German pink is a "descendant" of that idea!

From what i have heard happens in the Prison systems...
Some inmates might start liking the feminine pink surroundings...........eventually.........forcfully....

That is such a strange tactic. Bright pink, while pretty, does not soothe a man or woman. Do you find it soothing, GB?
xoRobyn

I will never have my (occasional) Grande Skinny Vanilla Latte without thinking of this post.
Thanks so much. ;)

Okay, I admit it. I clicked on "banned naked photos."
While I admit to not knowing the definition of "goolies," I gotta think that having them bitten off would not be a good thing.

I am a little surprised by Clint's subtlety. I would have thought he was more a "Spread em" or "Open wide" type of guy....

I try not to share details of my past lovers sexual idiosyncratic tendencies. I mean what if one of them saw it and told mine!

The very idea of someone obviously posted pics of their (or someone else's) semen, which led to a rule is amazing. Back in the day you hurried to wash away the evidence and cry over poor decisions. What has the world come to?

i may have a room in my house which can be used to humiliate hardened criminals. it's all pink. my dad in-law hates it. always had remarks from him whenever he visited. hahaha. but then, he also makes snide remarks about my yellow room, GB.

"Sweetie, did you floss"? I thought he would have been more "Do you feel lucky, punk?"

Sadly, since my days as a Major in the 6th (Poona) Division (Military Police) I have little faith in rehabilitation of offenders and tend towards "hooking them all up to the National Grid" for anything more than drunken ribaldry or minor cowardice in the face of the enemy memsahib. Bzzzzzt, crackle crackle, lights flicker - job done. No paint involved.

Ms Sparrow: Hello and welcome, Ms Sparrow. Thanks for that nugget of information - I should have realised the Germans lacked the imagination to invent it themselves.

Reality Jane: That all depends whether you can acquire a taste for taking it up the butt, Jayne. Whaddya think?

Robyn: It doesn't soothe me, Robyn. It just makes me think of Judy Garland and the Munchkins.

Beth: I'm so sorry, Beth! Maybe you could now drink Expresso like the Italians?

Al: Hah, you must have been disappointed when you clicked on that link! It was all text and no photos. No one unfamiliar with the word 'goolies' has ever failed to guess what they are.

Bagholder: Apparently, he saved those lines for Dirty Harry. In real life he was more of a Bronco Billy.

Angie: I would have guessed you weren't a kiss-and-tell kind of girl, Angie. And you're right about semen - good girls don't take samples!

Jaya: He must be worried you'll think he's gay if he doesn't make derogatory remarks, Jaya. Maybe you should reassure him that you won't doubt his manliness if he admits to liking pink. Didn't Superman tell Lois Lane he liked pink in the first Superman movie?

The Owl Wood: The enemy memsahib? The Nana Sahib never allowed his wives on the battlefield, so I assume you are referring to his elephant. Hooking offenders up to the National Grid is very 20th century. Nice to see an officer of the Raj with a progressive approach to punishment.

Is that a picture of a friggaccino?

I can't see the point of painting prison cells pink... if dropping the soap in the shower block doesn't curb their aggression a lick of paint isn't going to have much effect.

Oh for goodness sake. If they really want to go full on for the psychological warfare I'm sure they can do better than that.

How about making them all wear a frilly pinny when they're cleaning their cells? Or crochet leg warmers for the screws?

Someone clearly needs to make me director of German prisons.

In relation to your previous post - you've got to admire Facebook for attempting to fight the impotence of their users by banning both implicit and explicit sexual images.

What surprised me most: earwax is not ok but snot is... I wonder whether that's because in Zuckerberg's universe, earwax is related to some kind of sexual act.

Huh. So they think pink will somehow channel the bad dude's feminine side. Yeah, I'm sorta thinking it will do the opposite. Men stuck in a pink room, I think, will become more hostile.

Totally off topic, that is a really pretty shade of pink (yeah, it's my favorite color...I'm so predictable).

Not sure I'd be that bothered. Some of my favourite things are pink.

Facebook is quite pervy with what it bans. It takes down pictures of breastfeeding babies, for a start, including those published by national newspapers.

I think it's an organisation that needs to get in touch with it's feminine side.

Steve: It's a picture of dahi. Have you ever eaten dahi? It cools the palate.

Gappy: That's what an American judge did. He made convicts stand at a busy intersection wearing pink knickers. Not many cars honked at them.

Deborah: I noticed that too, Debs. Maybe snot is too difficult to ban because people often have runny noses. As for earwax, I've never seen it in large enough quantities to speculate about its uses.

Frisky Virgin: You like pink, Miss Virgin? So did Lois Lane and Superman! But I hope you wear white on your wedding day!

Angie: Would you tell me if a man kissed your butt?

The Jules: The Facebook team must have an encyclopaedic knowledge of fetishes to have banned what they've banned. What obscenity can you perform with ear wax?

I'm thinking it's not earlobes.

I didn't know semen was banned on facebook. I guess that means no pictures of yogurt, Elmer's Glue, or hand lotion. Seriously. I caught some of my high schoolers reading a Playboy in class. I shot Vaseline Intesive Care right on them. I got away with it, too.

GB, I tell everyone to kiss my butt. No one listens!

"Sweetie, did you floss?"

The Jules: There's quite a distance between those orifices.

Fred: Isn't Vaseline Intensive Care lotion good for zits? Those high-schoolers should have been thanking you.

Angie: You've got to say it in the right tone of voice, Angie. They probably think you're telling them to get lost.

Kage:Yes, Ms Kage, Clint did like to be called Daddy! Have you been doing your homework, or is that what you like to say?

Well, I guess I am ahead of my time...because some years ago I came up with the idea to confine hardened violent criminals to a cell where they would be forced to watch episodes of Barney the Dinosaur 24 hours a day... but I gotta admit making the cell pink is a nice touch. Though we really don't want to humiliate hardened criminals with these tactics. Not because it is not nice to humiliate people, but putting these ideas into practice will lead to a string of annoying action movies starring the next Stallone or Arrnold wannabe, where the abused convict will get out of prison and then pledge venegance against whoever put them into a pink cell where they had to watch reruns of Barney the Dinosaur 24/7. "I WILL FIND YOU, YOU FAT DINOSAUR AND SEND YOUR PURPLE ASS TO HELL!!!" the Steve Seagull wannabe will scream, and this will all lead to a disgusting purple bloodbath of death and carnage.

I don't think many people will sympathize with an ex-con who pursues a vendetta against the people who put him in a pink cell. Where's his sense of humour? I'd be rooting for the gaolers, that's for sure.