Tarentino is a sucker 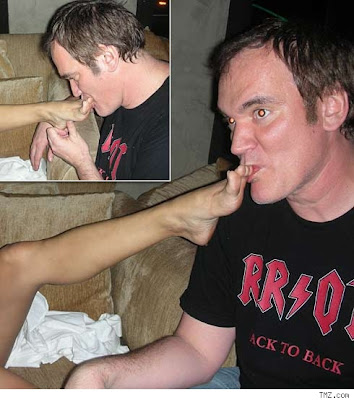 A 23-year-old woman called Beejoli Shah is claiming that Quentin Tarentino sucked her toes during a sexual encounter at the movie maker's residence. Her story is entirely credible, of course. It would be surprising if a man of Tarentino's character did not engage in kinky and unsavoury fetishes. One has to wonder, nevertheless, why Miss Shah was so eager to confess her part in this ugly incident. Was she warning future "guests" about what to expect if they ventured into the lizard grotto that Tarentino uses for a bedroom? You couldn’t fault her for that.

She definitely exceeded her tattling rights, however, when she complained about the appearance of Tarentino's penis, describing it as "the chode of all chodes". Even prostitutes generally avoid such graphic language for fear of giving people nightmares. Someone should tell Miss Shah that Mother Nature did not create the male appendage for ornamental purposes. Its function is to do a job of work rather than bask in compliments from female admirers.

Incidentally, I have a theory that the practice of circumcision originated as an attempt to prettify the penis, so that Jewish maidens would not be horrified by what they saw on their wedding night. Although a nice girl doesn't look, she can't always control what pops in front of her eyes, especially if the man she marries throws all delicacy to the winds once the forbidden fruits of her fruitery are no longer forbidden.

Regrettably, Miss Shah's behaviour suggests that she is something other than a nice girl. What can one say about a young Asian woman who drops her knickers for a famous film director with indecent haste, and then shamelessly spills the beans to her friends? Nothing complimentary, that’s for sure. The fact that she is a graduate of Berkeley College compounds the disgrace. The University of California should create a new degree classification for floozies of her calibre called "summa cum-on-my-face".

One thing Miss Shah shouldn't have to worry about is getting sued. I doubt even Tarentino would expose himself in open court to pursue a claim for dick defamation – the risk of the jurors agreeing with the defendant would be too great. She is luckier, in this respect, than Miss Lisa Ostermann, who received a court summons after referring to a man as "the biggest asshole in the world" on her Facebook page. A complicating factor in the case was that the fellow she insulted happened to be her father.

No one likes to see a daughter call her father an anus, even if it happens to be true. That sort of epithet should be reserved for cads, bounders and gym trainers who make unflattering remarks about the shape of one's tush. I'm glad to say that Papa Ostermann dropped his lawsuit after the matter was resolved behind closed doors, presumably by persuading his daughter to eat an extra-large helping of humble pie. As my friend Lady Chuffington says, a family's dirty linen should be washed in private, possibly with the aid of a biological detergent. 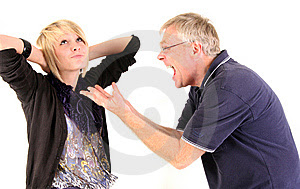 Comments:
Tarantino sucked her toes? Surely, if he was paying, he should have insisted that it was his toes that were sucked? What kind of dumbass is Tarantino anyway? Does he like the taste of plimsoles and veruccas?

The photo makes it look like she stuck her toe in his mouth when he wasn't expecting it and then took the picture. I smell shenanigans.

I agree with tennysoneehemingway !
Yikes, I shld stop posting messages referring to assholes as assholes on my FB :)

Totally credible. Tarantino is a well-known foot fetishist. Even in his movies, you see a lot of up-close bare foot shots.

The only thing that was maybe in less than good taste was telling the world he was the "chode of all chodes". Mind you, better being called one than potentially being named one.

You learn something everyday. Today I learnt the word Chode. I'm glad but wonder when I will get to use it

ok - so i dont know much about QT, is he married to some other woman/in a relationship? Does it, in the wider scheme of things, matter whose toes, if any, he sucks as long as he takes precautions - ie checks for fungal infections?

i hope old quentin had the toes thoroughly cleansed and scented before the festivities began.

My penis is beautiful. Not large, but very aesthetically balanced. I just want to help your readers avoid nightmares about Tarantino's chode. I'd put up pictures, but my server company won't allow it. It's that beautiful.

Steve: It could be latent homosexuality. A woman's toe is the closest thing she has to a penis.

Tennyson: You've got a good sense of smell, but I think the photo was staged. I would guess Miss Shah's legs are darker and fleshier.

Jaya: I'm sure you wouldn't call anyone an asshole unless he deserved it, Jaya.

Eden: Your link shows how what a force for good the internet is. Someone's daughter was saved from a terrible fate.

Nota Bene: I'm sure you'll have plenty of opportunities to use the word in a metaphorical sense. Just be a little creative.

DFTP: Can't you see the link between his movies and his toe-sucking fetish? He wouldn't be sucking toes if he were selling insurance for a living.

Billy: Maybe he prefers them a bit cheesy. If you've sucked toe you can acquire a taste for most things.

Fred: Your boasts are hollow with third-party commendations. A beetle is beautiful to its mother.

Miss Shah can't be bothered to ensure she has clean underwear and shave her legs and she lives in LA and attends all these glamorous parties? She really is sad and pathetic. I wonder if she clipped those toenails.

Honestly, I kinda feel sorry for the guy... having his personal life splattered like that in the media. It doesn't sound like he was rude or nasty to her - he even drove her home so I don't think he deserved that. I suppose it's to be expected from star struck college sluts I mean girls - but she could have at least been more discrete about it - emailing 15 people is a bit much dont'ya think?

But, at the same time, I couldn't help laughing my ass off while reading her email Mr. GB. I guess she's more entertaining on email than she is in the bedroom.

Rumor has it that he sucked Travoltas toes too.... when filming pulp fiction!

what kind of knob tries to sue his own daughter for calling him an asshole??

Hmmm
As if she slept with him for any reason other then he's rich and famous and she was hoping to make money from selling her story.

Let's be honest his face isn't exactly attractive, never mind any other parts of his anatomy.

I suppose one could look at this in any number of ways. I personally think that if one goes about having intimate encounters with someone they do not know, they risk the fate of Mr. Tarentino. Yes, Ms. Shah is a fame hungry trollop, but Mr. T is as morally corrupt on his own behalf. Neither deserves a free pass on this.

Also, I went to look for a picture of Mr. Tarentino's penis. I was unable to procure this piece of evidence to satisfy my desire to prove Ms. Shah either right or wrong. I was however able to find various other websites that verified the existence of her testimony that his penis is short, fat, and nub-like.

I think he'll get Steve Buscemi to reprise his role as Mr Pink in the film version; working title "Resevoir Chodes".

Azra: I suspect that telling people what happened was her main motivation, Miss Azra. You could say she was willing to prostitute herself for her art (her art being tittle-tattle).

Steve B: I bet Travolta enjoyed it.

Dull boy: I suppose he thought she was too old for a spanking. What would you have done?

Dirty Cowgirl: She didn't sell her story to the press, Ms Cowgirl, she just told all her friends, who told the rest of the world. Do women have anything more phallic than a toe? A finger, perhaps?

Angie: I'm very impressed by the amount of research you do for your comments. Do you think you could make a sketch of the chode from her description? It might attract a lot of viewers.

Notgod: I've heard Steve Buscemi can do a pretty good impersonation of a chode. He's that good an actor.

GB,
I am going to try. I am at work though, and it may pose a bit of a problem in producing fine penile art. I will get back to you with sketch work.

And here you are...
http://angie-uncovered.blogspot.com/2011/07/just-average-friday-where-im-asked-to.html

toe-sucking is a creepy, horrible, cringe-making fetish. it's absolutely disgusting.

unless of course you're on the receiving end.

There's nowt as queer as folk... who wants to be famous for having their toes sucked - by Tarentino of all people?!! :)

Some things just deserve to be kept between friends, or lovers, or people that hook up for some non-committal sex. When two people strip down and expose their imperfect, fleshy, saggy bodies to each other, they have formed a bond of silence. Any hairy moles, any stretch marks, any random hair, any premature ejaculation, any listless lovemaking, whatever, it should be kept between those two people.

And yes, I could probably be describing me up above, but that's besides the point.

Oh, and speaking of QT's foot fetish, a now defunct TV show once did a segment on it (incidentally, the co-host of this show was also the host and contributor for Infomania, which just went off the air this past Friday).

Angie: That's a very fine sketch, Angie, although probably too pretty to make it an accurate depiction.

Kage: How particular are you about the sucker, Miss Kage?

SDBS: I suppose she thinks the degradation of her toe will lead to bigger things.

Chris: Your "bond of silence" concept is a fine moral principle, but enforcing it may require a constitutional amendment.

It doesn't surprise me that you're a clever woman, Miss Virgin. I'm sure your future husband will have many better things to focus on than your toes.

GB,
Because I needed some validation on my penis drawing skills the other day, I let someone in on my artistic secret prior to posting it on my blog. That person has since provided me with an article you absolutely MUST see... I think it could satisfy Mr. Tarentino in more ways than one.

Thanks for that, Angie. How can we forward the article to Tarentino? He might well marry the woman and invite us to the wedding.

I am not sure if I know his people. I could try bribing him with a picture of his genitalia.

That being said, I can't imagine the incredible pain that comes from stepping on your nipple (though I'm sure in 50 years I will), that one is ALWAYS underfoot. Poor girl.