Disturbing news arrives from France about a naughty old man who tricked women into sleeping with him. How did he pull off this dastardly trick? By sending them a photo of a 37-year-old male model that he said was of himself. The women then agreed to a “sex in the dark” encounter, which is supposedly one of the thrilling events that occurred in 50 Shades of Grey. I say “supposedly” because I have no idea what went on in that silly film. Whatever happened in the dark shall remain in the dark for me.

His subterfuge was reported to the police by a couple of women who found out what he looked like after he had ravished them.

“He didn't correspond at all to the photo,” said Sylvie. “I felt total disgust.”

“I ended up seeing his silhouette in the dark,” said Leila. He was old, pot-bellied with a big nose.”

It’s fascinating that she complained about his big nose, because some women find this feature attractive in a man. I suppose it must have been round and bulbous rather than long and pointy. Hairy nostrils are another potential issue.

The French police have charged the 68-year-old man with a crime called “rape by surprise”. It is indeed surprising that such an offence exists. Of no surprise at all were the man’s protestations of innocence:

"For me, when she entered the bedroom naked, she was consenting,” he insisted. “At that moment, she couldn't care less what I looked like.”

He seems to be saying that the flesh can’t crawl at what the eye can’t see. But why did he use the photo of the male model if looks had nothing to do with it? According to my friend Ernesto Bongodrum, graduate of the Congo Law School, the man is guilty of fraud rather than rape. He told a huge whopper to get his fingers inside the honey pot. As for the women, they are guilty of being stupid hoochies.

More worthy of sympathy than Monsieur Le Big Nose’s victims are the female lifeguards in China who were groped by men pretending to be drowning. This is a case of human skulduggery at its worst – not merely crying wolf, but crying wolf and acting octopus. My ancestor Bo’sun Bananas would have flogged the guilty men with an electric eel for such a grievous breach of maritime etiquette.

The Chinese authorities hope to discourage future outrages by fitting a camera on each girl’s swimsuit. I don’t blame them for opting for a technological solution. Bum-pinchers and boob-feeler-uppers are too cunning to get caught unless you record their insidious acts on film.

“The cameras will help to root out uncivilised behaviour, or at least help to decrease the number of incidents,” said a spokesman for the local tourist board.

I’m sure they are right, but I would advise them to devise an appropriate punishment as a further deterrent. How about making the miscreants re-enact their crime with a female walrus in oestrus? 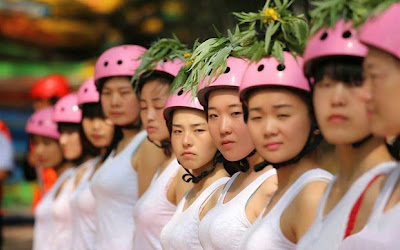 Comments:
sleezebags! many men are pigs!

this is why I have gay boyfriends; they want to be friends and they DON'T want to get into your pants!

If the girls looked as hot as the ones in that photo, I'd be unsure whether to arrest him or give him a prize for ingenuity :P

thanks for the excellent news feed mr bananas. can a spate of copy cat crimes be in store?

of course none of this would be happening in china if mao was still running things.

The old guy has behaved dishonourably and the women, as you say, were stupid. But it could be argued they were all acting like long-time married couples... getting excited by a feat of imagination in the dark rather than sober reality.

Why didn't I think of that? Nuts. The women who found out the truth and were full of disgust have their own stupidity to blame. Who would do that?! Idiots.

That pic up top is hot. Yikes. What a distraction.

Thanks for the video clip of Ophelia Lovibond. I'm willing to overlook her preposterous, pretentious name to hear her whisper mine over and over in that cut-glass accent. A bit like Russel Brand's, don't you think?

I would recommend doing it always with the lights on, to check out the merchandise beforehand.

Anne Marie: Hmm. What if you wanted one of your gay boyfriends to get into your pants?

Michael: Maybe you could do both, Michael. Send him to jail with a gold butt plug.

Billy: That's true, Billy. When Mao was alive, only he was allowed to grope women, which he did on behalf of his people.

Steve: Doing it in the dark is very old hat. Modern methods of putting the spark back into a marriage involve gimp costumes and ice cubes.

Exile: Haha, all British accents sound the same to you Americans! Ophelia is a posh girl trying to sound a bit more common.
Russell Brand has the voice of lower-class toe-rag.

Leni: How right you are, Leni. Examining the goods is a big part of the pleasure.

"Steve: Doing it in the dark is very old hat. Modern methods of putting the spark back into a marriage involve gimp costumes and ice cubes."

Taking into account the boundless audacity of the women involved, I'm surprised they actually complained to the police. Cheap-thrill seekers are supposed to be ready and willing to take chances. Cunning old fox deserves a medal

Ironically as I was reading this article I was also watching an Adam Sandler movie in which he is a cobbler with a magic stitching machine. He becomes the person who's shoes he stitches just by putting them on his feet. So, he could, for example, become David Beckham just by wearing Beckham's shoes... then go out and pick up hot chicks as David Beckham. How does Gorilla feel about that?

How stupid are these women? Everyone knows that when a man insists on first-time sex in the dark, he has a hairy back, pot-belly, bulging nose, and card for senior discount at Ross Dress for Less Tuesdays.

Let me get this right. A man you have never met sends you a picture. On the strength of this picture you sleep with him... In a dark room... Then you later find out he's not as young or as handsome as the picture. Well, who'd a thought.

Oh dear. Now as a expert on the male skin and anatomy, I'm sure I could tell a male model from a 68 year old with a pot belly and a huge nose. The man's skin alone should have reminded them of a lace doily.

Seriously, i don't know who the bigger idiot is- the Frenchman thinking he could get away with it or the woman who answered the ad.

Steve: I'll send you the complete manual if you're looking for more ideas.

Joe: Yes, the police should have just said "C'est la vie" when they complained. Hef might be the right man to pin a medal on him.

Jimmy: If he matches Beckham in appearance, I don't see how anyone could complain. No one is interested in Mr Becks for his mind.

Robyn: You don't like hairy backs, Robyn? I am almost offended! A bulging nose is certainly unattractive, but what about a long and pointy one?

Mrs Table: Not everyone is as worldly wise as you, Mrs Table. Some women's hormones start playing up when they see a picture of beefcake.

Mistress M: Well it all depends what they got up to, Mistress M. He may have done everything with appendages and tongues.

Cocaine Princess: The women are the bigger idiots, Miss Princess. The man might yet get off scot free.

You know, I think those woman are partly at fault here. They had no idea if he was telling the truth or not and accepted that fact when they chose to keep the lights off. What I want to know is did he please them in bed. lol

I would have been good with just mouth-to-mouth.

Guilty, guilty and guilty. I'm sure there were more guilty parties involved, but only two came forward. They should all get locked up together in a brightly lit cell. Oh, and even your friend from the Congo law school shouldn't get his hands dirty representing any of them. On another note, I tried writing a comment a few days ago, and for some reason it wouldn't go through. Sorry this is so late, Gorilla.

Sorry, I got stuck on the first picture. Didn't read anything after that. I'm sure it was good, though.

really, GB. did the lady have to see the pot-belly and skin to confirm that he wasn't a male model in the photo ? couldn't she have felt them in the dark by all that touching ?

Mary: Yes, Mary, he made fools of them. I suspect he did please them until they saw what he looked like!

Al: So you're a good kisser then? Does Mrs P concur?

Julie: No need to apologise, Julie, your comment was well worth the wait. If the trio were forced to share a cell, I would fear for the man's safety!

Kage: Have you ever been bound and blindfolded, Kage?

Jaya: One might think so, Jaya, but it's possible that he did all the touching. You can't really tell how old a finger is.

"How can I pick up women without them looking directly at me?"

A question I, like too many other men have been long searching for an answer to. This scenario is not the answer though.