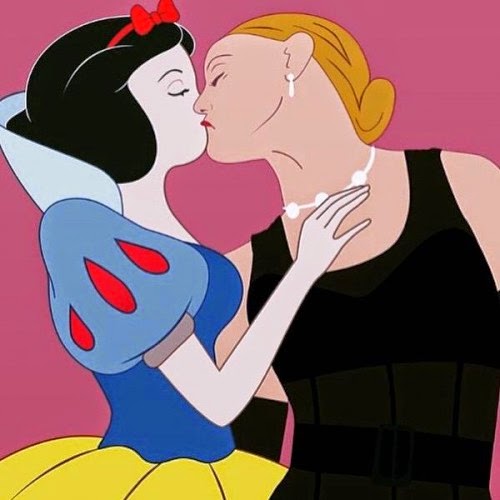 An on-line magazine has accused Madonna of “ruining everyone’s childhood” by publishing a cartoon of herself smooching Snow White. I’m just glad the seven dwarves didn’t get into the picture. Madonna should beat the rap on the legal technicality that it’s impossible to ruin the childhood of someone who is an adult. Once you have grown up, your childhood is either irretrievably spoiled or irreversibly coated in sugar candy. Short of getting into a time machine and chasing down your infant behind, Madonna is powerless to influence the matter.

She might have ruined the childhood of actual children, of course. But I suspect that most kids have other things on their mind, like inventing a text abbreviation for the word “bodacious”. Perhaps the Disney Corporation should interview Pinocchio to find out whether he’s developed a taste for crazy dyke action.

A potentially more serious charge about the cartoon kiss was made in the following tweet:

It’s a fair point, but wasn’t Snow White also kissed by a prince after the dwarves had exhibited her in a glass coffin? No one ever accused him of molesting an underage girl, even though she was in a coma and unable to resist his advances. Furthermore, the prince rubbed salt into the wound by marrying her shortly afterwards. There’s no point condemning Madonna for a peck on the lips if the girl is being ravished in a royal four-poster. In Snow White’s position I’d be grateful for the diversion.

It would interesting to carry out a survey of fathers with teenage daughters, asking them whether they’d prefer to have their child deflowered by Madonna or a moody young fellow with raging hormones. Madonna may like to present herself as daring and outrageous, but she’s pretty sentimental about girls of a similar age to her own daughter. My guess is that she’d execute the operation with extreme tenderness and sensitivity. Lesbian sex can be a beautiful thing if no one is trying to prove she can outdo a man.

You’ve got to be careful how you handle lesbians, though. The BBC has been accused of deliberately killing off female characters involved in same-sex relationships. I’ve not watched any of the TV shows in which this allegedly occurs, but I can understand the frustration of dedicated viewers. It’s like being told that oysters are off the menu just when you’ve acquired a taste for them.

The facts regarding the lesbian cull appear to be damning, but I’m not convinced that the BBC is responsible. Its culture has been lesbian-friendly ever since ladies’ tennis started to attract high ratings. It saddens me to say this, but I suspect that many young actresses do not want to be typecast as lesbian characters. They fear that once the public sees them in that way, they’ll never be offered a part where Zac Efron wraps his tail around their haunches. Isn’t that why Jodie Foster kept her Velcro in the closet until she was too old to play the love interest? 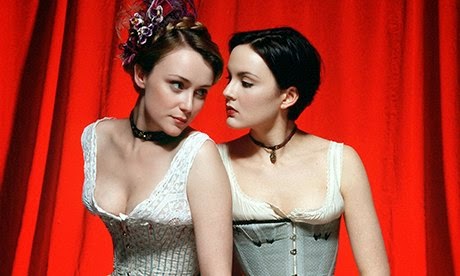 Comments:
Snow White seems to be far more buoyant that Madonna and Madonna looks rather grim. I fear the cartoon does not serve Madge well.

Who knew Snow was 14?! Where'd that bit of info come from?! It's probably not true at all. It's just to make another anti-Madonna point. Why do people hate her so much? I have a teen daughter and Madonna is welcome in my house anytime at all. What's the alternative? Some spotty punk with a beat-up Trans Am that leaks oil all over my driveway? I'll take Madge any day of the week.

I'm also appalled by the pairing of Madonna and Snow White. Surely, she should have chosen a Disney character much closer to her own age, like Ursula the sea witch from The Little Mermaid, or Cruella deville from 101 Dalmations. Of course both of those characters were evil, and she wanted to find someone who personified goodness, which is why Mrs. Potts from Beauty and The Beast would've also been a better choice.

This is a pretty tame stunt for Madonna. However, it seems it has still brought her a gorillion dollars worth of free publicity. I wonder what it is like to have practically every move you make get covered by the mass media.

That picture of Madonna smooching Snow White is outrageous!
They should be topless.

there was time when i thought jodie foster was the most beautiful woman on the planet. she's still smokin hot but i've now decided that helen mirren deserves the honor.

Steve: Only one of them is like a virgin, that's for sure.

Exile: I was thinking of you when I asked the question about fathers of teenage daughters, so I'm glad you answered it so directly. If only daughters took their father's advice.

Julie: I seem to recall Cruella Deville was a chain smoker. Madonna would be a victim of passing smoking if she kissed Cruella on the lips. Or would that be active smoking?

Jimmy: Do you remember when Madonna kissed Britney Spears, Jimmy? I think it's her way of showing support to younger women. What the media think is neither here nor there.

Michael: We'd first have to agree which people matter, Michael. My vote goes to Julia Gillard. What's she up to these days?

Al: If you ever saw Snow White's pubescent boobies, you'd be punished by having dish soap squirted into your eyes. The sentence would be a carried out to universal acclaim by a man who didn't see her boobies.

Billy: Jodie was a pretty girl who only had eyes for other pretty girls. You were wise to switch to Helen Mirren.

I seriously doubt that seeing Madonna kissing anyone would freak anyone out or hurt them in any way.

I have a problem with writers killing off lesbians. Especially hot ones. Also, cartoon Madonna has quite the masculine jaw line.

Sometimes I feel people have way too much time on their hands as they find the most stupidest things to complain about. I can honestly say that my childhood has not been ruined.

I see nothing wrong with any of this. It's not as though Madonna was doing it with the seven dwarves...all seven at one time. Even if she was it wouldn't ruin my childhood nor theirs. Suddenly, they'd all be Happy. Especially Bashful.

I think she's running a car wash in Wagga Wagga.

I always wanted to be bodacious and since I wasn't it ruined my adulthood.

Mary: What if she kissed a horse, Mary?

Dr Ken: I agree with you, Dr Ken. Lesbians should be a protected species, like the bald eagle.

Cocaine Princess: I'm glad to hear that, Miss Princess. I'd be very upset you weren't a happy little girl!

Robyn: I doubt Madonna would have sex with more than two dwarves at a time, Robyn. My guess is that Grumpy would be the first one to bite her thighs.

Anonymous: It's never too late to be bodacious. Start by dressing in shocking colours.

People love to get pissed off with Madge but I think she is an interesting artist. Whenever I am concerned about doing something a little edgy, I always ask myself "Would Madonna do it?" and if the answer is yes then I do it too. I don't think I've said no to anything, come to think of it but I'm not snogging a female, 14 year old cartoon character. No.

I'm glad you have some taboos, Jules. Anyway, kissing a cartoon character can't be any fun because they're two-dimensional. You might get a paper cut!