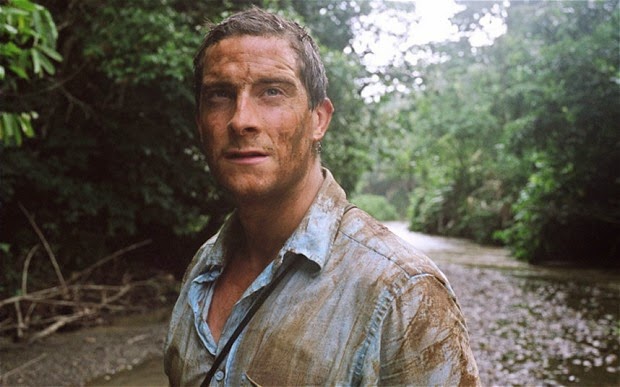 The British TV adventurer, Bear Grylls, has said he would order his son to eat him if they were stranded in the jungle without food. For this statement alone, he should be banished from the rainforests of the world and forced to live on milk and cookies for the rest of his life. A self-described “survival expert” who cannot find food in the jungle is a worthless humbug. We gorillas think of our habitat as a giant salad with plenty of protein snacks available if you don’t mind putting wriggly things in your mouth.

One has to pity his son, of course. I don’t know how old he is, but the thought that he might one day have to chomp on his daddy’s carcass must be giving him nightmares. I dare say it’s also ruined his appetite. A big-headed TV personality like Grylls no doubt believes that his flesh is tasty, but its flavour is probably no better than porcupine or wart hog. If he’s really serious about the whole thing, he ought to cut a piece of meat from his rump and try it himself. Don’t ask your child to eat something you wouldn’t touch yourself.

Now cannibalism is a dark dietary practice from man’s primeval past, so far removed from the experience of modern humans that one rarely finds it discussed. My friend Harry Hutton, the roving English teacher, explored the topic in one of his early blog posts by posing the following question:

You are trapped on a desert island with the Spice Girls. Food and rum have run out. You are weak from hunger and there is no hope of rescue. Which Spice Girl would you eat first? (Scroll down to vote).

As a vegetarian gorilla I abstained from the vote on principle. My favourite Spice Girl is Ginger, and she’s certainly the one I’d prefer to nibble if someone put a gun to my head. But eating her flesh would be out of the question. The problem with polls of this sort is that they involve a moral paradox. The Spice Girl you’d most like to bite should the last one you’d actually want to devour if you’re not utterly devoid of sentiment in confronting such dilemmas.

Scenes involving cannibalism are mercifully rare in the movies. The only example I can think of is the ending of a film called The Cook, The Thief, His Wife and Her Lover. Helen Mirren’s lover has been murdered by the gangster who owns her, so she takes revenge by forcing him to eat her lover’s body, expertly cooked by a gourmet chef. As the gangster feels the vomit rising in his throat, she encourages him to sample the dish by saying:

There should have been a warning before the closing credits that this remark was facetious and not based on culinary research. A man’s todger contains no muscle tissue and doesn’t even qualify as offal. You’d be a fool to try it.

Comments:
If I were Bear Grylls' son I'd be emailing Ray Mears right now and asking him to adopt me.

Just wait until that kid is in his troubled teen years and reads that. Next stop, therapy. Some folks just shouldn't have children. Especially if they're more concerned with their careers.

I'm with you, brother. Ginger Spice is the one for me. Yum + fun.

That's the first thing I thought of. You mean he COULDN'T find anything to eat in the jungle? Pull something off a tree or kill something (preferably MUCH slower and MUCH smaller than you).
Unless, he meant "eat me" in the colloquial sense.
In that case, that's kinda gross.

Personally, if found alone in a rainforest with my child, I have nothing to worry about. She did a report on red eyed tree frogs last year, in first grade, so I'm sure she knows everything we need to know about surviving in the rain forest.

Hopefully, Bear's son carries protein bars with him at all times. We actually saw more than enough of The Cook, The Thief, His Wife and Her Lover. I remember it received rave reviews, so I was shocked at how vulgar it was. Vulgar movies usually don't bother me, but there was excessive nudity involving the most unattractive men. I think that grossed me out more than the acts of cannibalism. At least I knew those parts weren't real.

I'd probably go for Shorty Spice. Smaller portions, in case I didn't like the taste - seems a smart way to go. Don't you think,GB?

Steve: Mearsy, God bless him, would be the perfect surrogate father for most human infants. Although to me, he is more like a son, a white Mowgli.

Exile: I fear the boy has already read it and is developing an eating disorder. Ginger looks very tasty - as do many women with the orang-utan gene!

Al: If he wanted to get eaten in the colloquial sense, I'd send him a female gorilla. His boy deserves something more nutritious.

Shoshanah: Hello and welcome, Shoshanah. Your daughter sounds like a budding jungle explorer. Has she seen a movie about Tarzan and Jane?

Julie: It started with a shockingly vulgar scene in which a naked man was molested for not paying his restaurant bill. But the only other naked flesh I remember belonged to Helen Mirren. You didn't mind that, did you?

Robyn: Smaller portions are the way to go, Robyn, especially in America! Wasn't Laura Ingalls called "half-portion" by her daddy?

Eating any of the Spice Girls would probably give you a horrible belly ache.

Um, I couldn't eat my childhood heroes. Although, I do agree with you that Ginger Spice was the best!!! It's been years since she has been famous and I am still trying to match her red head hue.

I'm sorry but Bear Grylls is an idiot, a fake, and his show was completely scripted. Any idiot who would hold a pile of dung over his own face and squeeze it hoping for a drop of moisture to drop into his mouth to quench his thirst is to idiotic to be telling an impressionable child anything. The man drank more urine in his tv show episodes than any man needs to. I really hope no one ever lets him have a tv show again.

Surely he would teach his son how to forage?

As for eating a Spice Girl I don't think there's enough hot Taco sauce to sweeten that meat.

What a fabulous line from Helen Mirren that was!

i've been in love with helen mirren ever since i watched the last station.

The Cook, The Thief, His Wife and her Lover ......boy I had seen that and forgot about it. Can't say I hated it, it was visually well done, but was a definitely different movie of sorts. I will have to re watch that again. Here , there is a show called Walking Dead, and they recently did a cannibalism story where humans were captured for food. A bit disturbing. I would have to go vegetarian myself.

Jimmy: That's an unwise comment to make about the members of a much-loved girl band, Jimmy. Have you ever been tarred and feathered?

Jax: I think you should settle for auburn, Miss Jax. It's more appropriate for a Sicilian. :)

Mary: Wow, Mary, you must have seen a lot of him on TV! Unfortunately he has been given a new show.

Jules: I think they'd make you an honorary spice girl for that comment, Jules! Do you remember the line "Sugar and spice and all things nice"?

Maddie: I'm glad to have refreshed you memory - it's an arty movie that should have been called The Cook, The Thug, His Wife and Her Lover. Going vegetarian is a choice I would heartily approve of.

I'm not eating anyone! I don't care how hungry I was, human meat is never going to touch these lips, at least not willingly that is. And for the record when I say human meat I'm referring to the cooked kind.

So you might eat raw human meat in the right circumstances?

@Gorilla Bananas hmmm maybe, if it was seasoned just right.

I was vaguely wondering recently who that guy was that squeezed elephant mess over his own face, not cut plant water. I still cannot believe what I saw!