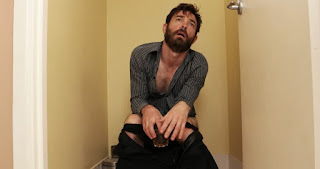 A few days ago, the manager of the safari camp invited me to inspect one of his turds.

“You’ve got to look at, GB, it’s massive!” he exclaimed. “I’d like to know whether a gorilla could shit out something like that! I purposely didn’t flush so you could authenticate it!”

“My dear manager,” I replied. “You are gravely mistaken in thinking I am qualified to pass judgement on your excrement. I suggest you take a picture of the toilet bowl and send it to experts in the field.”

I shrugged my shoulders and told him his guess was as good as mine. Maybe I should have given him the name of an elephant trainer. Or, indeed, an elephant.

Most humans, of course, have much greater inhibitions about discussing their solid waste. I don’t know whether this is a good or bad thing. Perhaps, on balance, it’s for the best. It would be very tedious if everyone left the toilet unflushed after producing a notable stool. But the other side of the coin is humans who hold it in because they’re too embarrassed to evacuate their bowels in an unfamiliar lavatory.

After doing my own research on the subject, I found an article claiming that 50% of women and 29% of men are worried about having to defecate in their place of work. Why more women suffer from this anxiety is an interesting question. Perhaps they think that shitting (and farting) is unladylike. It’s certainly difficult to imagine Audrey Hepburn or Julie Andrews having a dump – and yet we know they must have done it like everyone else. Perhaps they should have spoken more openly about their bowel movements – it might have dissipated the cloud of shame that hangs over the whole subject.

The article makes a number of helpful suggestions for how to lessen the angst of a workplace poop. Number one on the list is listening to music when sitting in the cubical. The idea is that you won’t worry about the noise you’re making if you can’t hear it yourself. This reminds me, somewhat, of an ostrich burying its head in the sand. But that doesn’t mean it’s ineffective in the circumstances. Anything that helps someone shit in peace has my blessing.

Number seven on the list is “Don’t be a dick to other office poo-ers”. I heartily endorse this. Heckling someone who’s having a difficult time in the lavatory is a prime example of boorish manners. No one who indulges in this sort of behaviour deserves any mercy when they’re parping and plopping themselves.

The most interesting point on the list concerns the financial implications – “when you poo at work, you’re getting paid to shit”. Although this is technically true, it also deprives you of a more leisurely poo in your own home. My old circus buddy, Smacker Ramrod, says that emptying your bowels on a day of leisure while reading a magazine is one of the great sensual pleasures of life. Is he wrong? 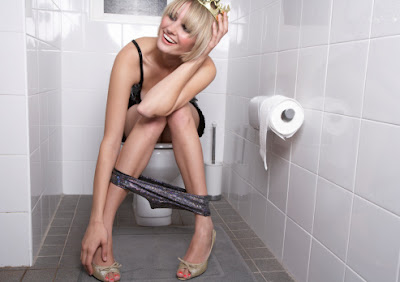 Comments:
Still hard to imagine the girl of my dreams grunting while pinching a loaf.

I knew a female ages ago gave her anixity to poo in public toilet. To me it would be quite embarress to poo in ones undies.
Coffee is on

Well, when I was working i try to be as dainty as I can and I'm successful. But then you'd have the building engineer come in and it all of a sudden sounds like a Beethoven symphony gone wrong. Boy could he clear the Lu.

Everybody poops. I don't know why we make such a big deal out of it. I can't poop on airplanes. But I'd like to report that I don't have a problem in the office. In fact, if you'll excuse me...

single toilet rooms for both genders at my office. and I have no problem dropping one at work.

I think you should further investigate by contacting a scat queen. I’m sure she’d appreciate the business and enjoy humiliating the embarrassed. Just a suggestion.

Getting paid to poo. Well that's one way to look at it. lol

Strangely enough, I rarely, if ever have to make any noises when I eliminate. Unfortunately, my eliminations aARE indeed legendary in size. I prefer to use the work toilets, because they are industrial strength in flushing power and I am less likely to clog said toilet. I estimate I clog a home toilet 90% of the time, whereas at an industrial style toilet, I clog it perhaps only 20% of the time. I try very diligently to not have to go at any home toilet of any friend or relative due to the large size.

My wife (who has miniature poops the size of a tater tot) often thinks I am at risk of passing out due to the change in my body weight after relieving myself (sometime it is 4-5 pounds difference).

take your manager to a berlin nightclub at 3:00 am, i'm sure he'll meet a few like minded soul brothers.

I think that men feel victorious after a good poop, GB. Women are more likely embarrassed. It's crappy, but that's the way it seems to be.

Wonderful choice of topic, I wholeheartedly encourage conversations about the four healthies: eat,drink, pee, poo and the rest takes care of itself. Personally I poo anywhere, when I want to, including the woods. It is good to away from social inhibitions and anxieties about natural things.

Jono: So you've never been tempted to watch? Good fellow!

Dora: No woman should poo while wearing knickers, but isn't it ok to keep the bra on?

Mistress Maddie: I never doubted you could poo with refinement, Mistress. I bet you could write a book called How to poo like a lady. :)

Exile: Does anyone poo on aeroplanes? It seems so inconsiderate.

Anne Marie: You must be very happy at work, Anne Marie. You wouldn't poo so easily if you were unhappy.

Jules: I'll first have to look up what a scat queen is, Jules. I feel a bit apprehensive about what I might find, to be honest.

Mary: It's more like a tip, Mary. You wouldn't get paid for pooing 8 hours a day.

Pipe Tobacco: I see it as a symptom of your happy marriage, Professor: your wife doesn't regard your enormous turds with disgust and you do not regard her rabbit droppings with contempt.

Mr Rosewater: Are they all big shitters in Berlin then? It wouldn't surprise me.

Robyn: Both genders should feel relaxed and relieved, Robyn. There's no need for either shame or triumphalism.

Viking girl: In the woods? You are closer to your primate cousins than most humans, I must say! Better than leaving one in the toilet bowl, I suppose.

Gorilla, maybe you could start a pooping blog where people send you pics of their poops and you could post them and we could comment on their size and texture etc.

She is understanding of my rather gargantuan output as long as I am responsible for fixing the clogs. Another reason I TRY to go at work as much as possible. Less work for me.

Jimmy: I've got a feeling that's already been done, Jimmy.

Pipe Tobacco: I think you should install a toilet with a wider and deeper bowl. Pooping at work isn't really consistent with the hearth and home values you espouse.