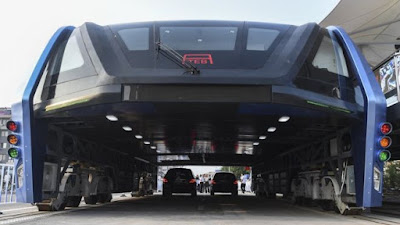 The late Gene Roddenberry said the purpose of science fiction was to portray a hopeful vision of the future, but I’m worried it’s creating a lot of false hope. Take the transporter in Star Trek. I can’t think of anything more wonderful that whizzing from A to B in a pulse of sub-space energy, but what are the odds of that ever happening? Even if it’s feasible in theory, you’ve got to wonder how the away team always ends up on a clean piece of ground, rather than treading on dog shit or gate-crashing the lair of some flesh-eating lizard. Ideally, you’d send an expendable peon to check out the place in advance, but that never seems to happen on the Enterprise.

The phaser, on the other hand, is much closer to reality. We already have the laser, its rhyming stepbrother, and I was pleased to read about a new application in Canada. Students from Vancouver have developed an auto-firing laser, which zaps uppity geese who dare to plunder the crops of hard-pressed farmers. There’s no need to feel sorry for geese, who are the hooligans of the avian world, renowned for honking and flapping at anyone who attempts to reason with them. The laser does not injure them in any case. Rather than cooking the goose’s goose, it spooks the bird and makes it flee in panic.

However, the most important advances in technology will probably be devices that no one ever predicted. Who, in the reign of Queen Victoria, would have dreamt that 21st-century humans would be relaxing in hot tubs and Jacuzzis? A bath used to be a monthly ordeal endured by gentlefolk to scrape off their befoulments with hard brushes and coal tar soap. Yet somehow this grievous tribulation was transformed into a sensual experience with massaging jets and swirling underwater vortices. Miraculous.

A more recent example of an unforeseen invention is the straddling bus, which has never appeared in a sci fi movie. The Chinese are incredibly excited about it, because their own engineers designed it, and it does look very remarkable. It’s essentially a giant mobile conference room with sufficient space below for cars to drive right through. Impatient motorists will be able to pass safely underneath, instead of hooting their horns and attempting dangerous overtaking manoeuvres.

There are humans, of course, who shun the blessings of modern technology. I suppose a jungle-dwelling ape like me should admire them, but in truth I view them with suspicion. It is not in the nature of man to eschew his creature comforts unless he is a religious hermit. I’ve heard stories about a human tribe called the Amish, who are said to draw water from wells and pluck their own chickens. All well and good, but aren’t they also a tourist attraction for visitors who want to chuckle at their quaint customs and silly clothes? As any gorilla knows, you can’t get into the tourism business without acquiring a taste for easy living. I wouldn’t be surprised to find Jacuzzis in their homes. 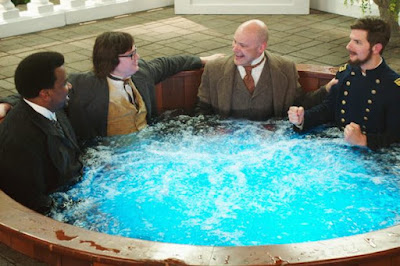 Comments:
I don't have a cell phone, or other technogeek crap; I don't need it.

Are you from the future?

I always figured that a real life teleporter would end up rematerializing me halfway into a wall or something.

Or we know what happened to Jeff Goldblum when he tried it in the Eighties without checking for bugs.

Preferably, the guy in the red uniform shirt would be our test subject.

I was very curious about what a 'Straddling bus" might be and now I've seen it, hats off to the Chinese. It's genius.

I think I was on one of those Straddling buses, or was that something else. I 'm all for a teleaporter. I could get to vacation spot much faster.

i don't want a tele-porter or chinese straddling machine.

i want my own groot. if a kick ass walking tree isn't nice, what is?

I've never had a cell phone. But then I stay home most of the time so I don't need one. I might get out more if I had a transporter or a flying car. lol

Anne Marie: Well, maybe you'd change your mind if you saw the latest sex toys. They're getting better!

Nasreen: I never knew Jeff Goldbum tried the teleporter. I'm not surprised it malfunctioned for a man of his height. So easy to forget the head.

Jules: Am I right in thinking you'd prefer driving underneath to sitting inside?

Mistress Maddie: I can't believe you've been straddled by anything that big, Mistress. But there's a first time for everything!

Mr Rosewater: A walking tree? Is that what 'groot' is? Now that would be a marvel of Nature surpassing any Chinese invention.

Mary: Well, I suppose there's no need to get out if everything you want is at home. But I think you should pay a visit to the Grand Canyon once in your life.

I want a jacuzzi in my home with that nice cleancut uniformed man on the far right. Or just the nice uniformed man will do. Thanks, GB.

A teleporter would be nice to get me out of committee meetings.

"Pluck their own chickens?"
Now there's a euphemism I've never heard before.

After "the Big One" hits I'll be glad to know my low-tech life will not suffer too much. The fragility of the grid is astounding. That said, I always wanted a teleporter.

Robyn: His pants will be very wet when he gets out of the Jacuzzi, Robyn. Do you have a tumble dryer?

Al: I've never heard it before either! Where are your chickens?

Jono: Don't be too complacent. If you're doing OK, you'll be a target for vagabonds on motorbikes. Have you seen the 'Mad Max' movies?