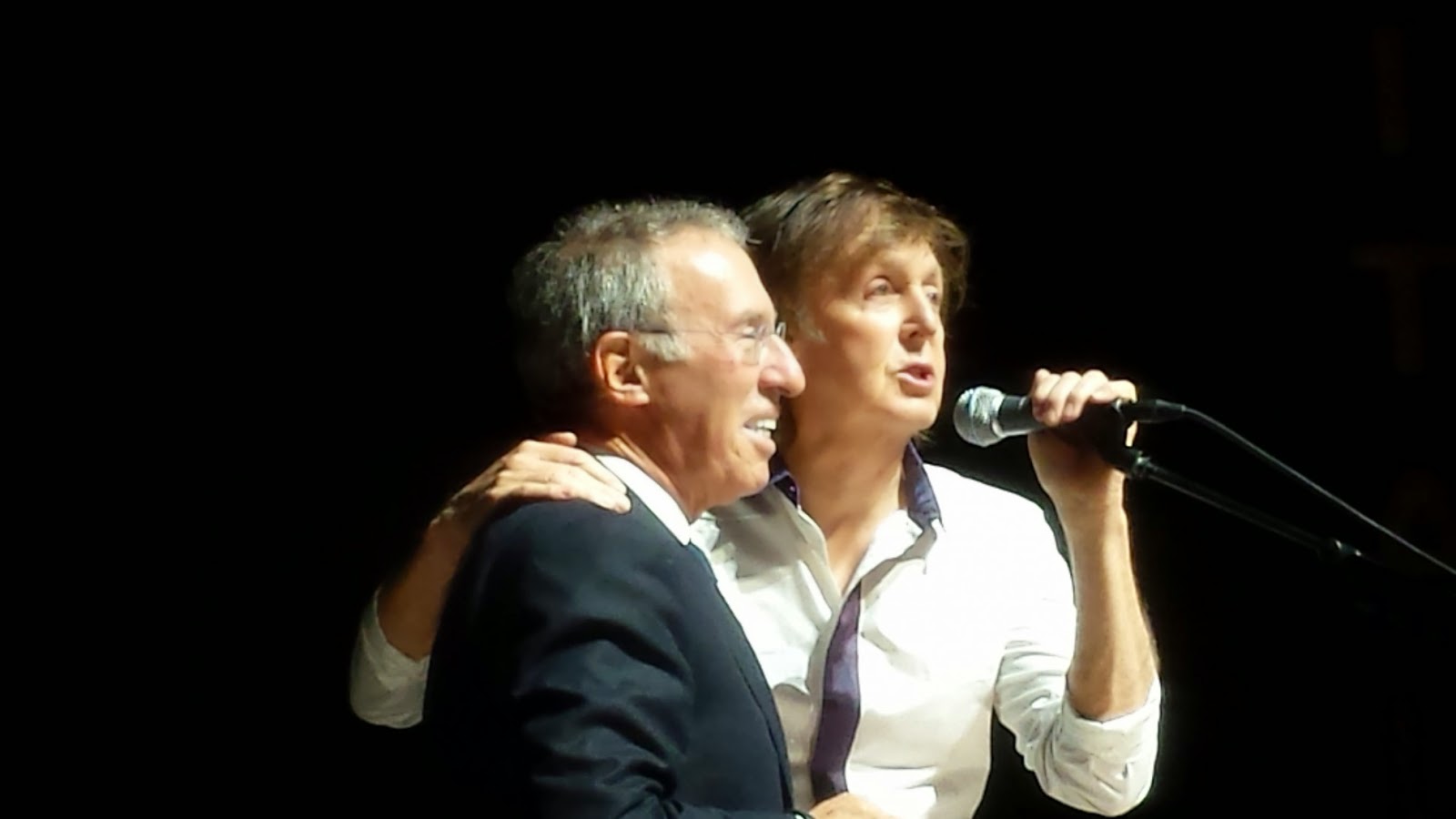 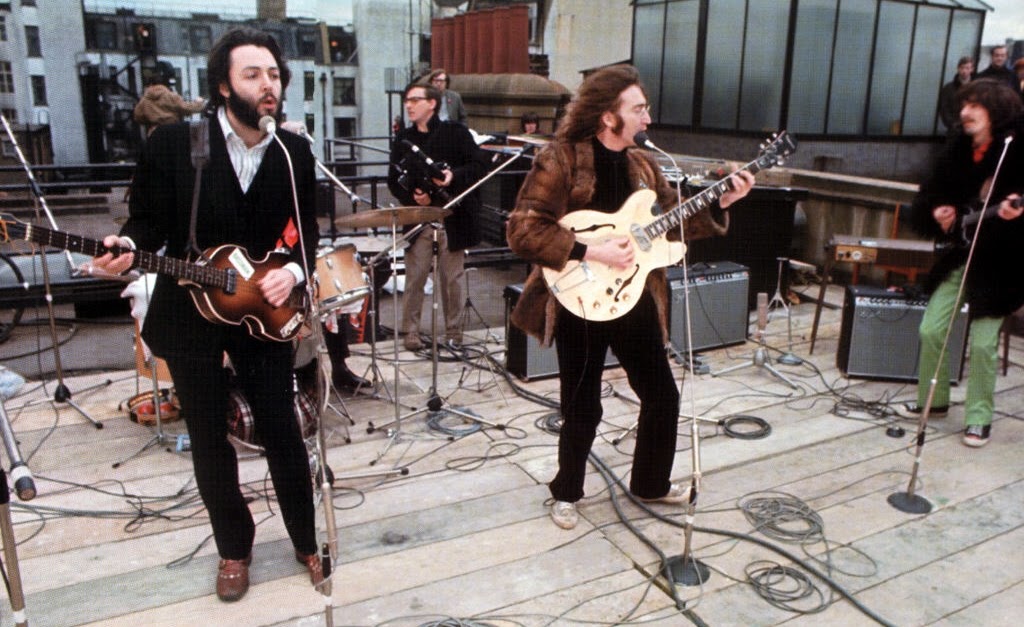 Comments:
How bizarre. I think I need new glasses. The top picture of Paul McCartney looks like Miranda Hart. Did he modernize a Beatle's classic by staring into an imaginary camera and mouthing the word, "Help"?

Thanks GB for the story about the monkeys on the roof. I had no idea that was the reason for the delay in stopping that amazing stunt. Amazing how one can learn so much from an educated ape such as yourself! At Paul's stage in life I bet there's one thing he'd like to buy with his millions, although I'm certain he has tried and failed. Personal youth

The first thoughts in my head was, "I hope that's not true." Then the link to the story. Did you see that list of past performers? Rich people live in the sun.

Who the hell is female first dot co dot uk? How very unwelcoming. They should have titled their site "Men, fuck off."

they danced to in the traditional arms-forward-bum-backwards style"
I never realised it was chimps that invented twerking....or was it The Beatles?

Jules asks an astute question. I'll need to come back to find out your answer, GB.

Paul's ex must've really been upset, putting all that dirty linen on the table. I imagine he's never even seen a washing machine. But really? One million for a performance? He's just Paul McCartney, NOT The Beatles.

My first thought hearing of it is that Paul was making sure that they all donate to the causes one way or another!

I don't blame him for wanting the Monkees off the roof. With the possible exception of Davey Jones, they were dreadful. I hated their TV show.

I honestly don't know which parts of this article are legitimate journalism and which are writer's embellishment. Sea cucumber farms? Chimpanzees watching a Beatles concert? And quite frankly I am unwilling to do the hours of research it would require to find out. Though it would have been neato if Paul McCartney pulled some stunt at the concert for the billionaires which would have caused him to again get evicted by the police...

Steve: He is looking rather pale, isn't he? Maybe he's wearing face paint like the first Queen Elizabeth. 'Help' was John's song, so I don't think he'd take its lyrics in vain.

Joe: You're welcome, Joe, disseminating knowledge is what I'm here for. I hope Paul has stoically accepted that his heart-throb days are over.

Exile: I thought this story would upset you, but really why be jealous? They paid a million dollars for a dream that ended 45 years ago. I'd only be jealous if they had a time machine.

Jules: Twerking is a pale imitation of what chimps do, Jules. They've got very long arms and bums that can stick out further than Bruce Forsyth's chin.

Robyn: She was as angry as a rattlesnake and twice as venomous. He was lucky to get out of that marriage with his kneecaps unbroken. Do you think he could have spent his fee in New York?

Rose: I hope that's why he did it, Rose. Think of all the soya bean charities that need their support!

Al: I heard the Beatles were very friendly to the Monkees, comparing them to the Marx brothers (while avoiding any discussion of their music). Alas, poor Davy is no longer with us.

Jimmy: Do you think I'm a journalist, Jimmy? I've tended to think of myself as a diarist and an essayist, but I'm happy to be a journalist if that's what the masses want. Paul is too old and distinguished to get evicted by the New York police. They would queue up for an autograph like everyone else.

I don't care if someone pays Paul McCartney a million dollars for a performance. He does a lot of good in the world, and he brings people great joy. I saw him perform once. It was the most exciting night of my life.

A few years ago, Heather Mills was a contestant on Dancing With The Stars. She did pretty well considering she only has one leg. Last year a Special Olympic athlete who lost both of her legs, came pretty close to winning on DWTS. In a few years, someone else will have a leg up on Paul McCartney, and they'll probably get paid 2 million dollars. I agree with Janie that he's likely to donate a lot of it to charity.

when did sir paul lower his fees?

Knock, knock. Who's there? Ringo. Ringo who?

I couldn't care less how much Paul McCartney was paid either. Anyway, like you say, it would be just a drop in the ocean - of which he has undoubtedly poured back countless millions. He's a good man. Stands by his principles.

I saw him perform in Auckland NZ a few years back. Brilliant evening. One that I won't be forgetting anytime soon.

To any stray billionaires reading this: I will happily perform at your event for half Paul's fees. I may not be a Beatle, but I'm at least as musically talented as William Shatner.

Janie: Paul is lucky to have such devoted fans. Just imagine how excited you would have been to see him perform with the Beatles!

Julie: I suspect Heather has received more from him than any charity, so I'm glad she's doing her bit for the entertainment industry.

Billy: 1 million is his concessionary rate for friends.

Static: He's known as 'Richie' to his Liverpudlian chums.

Mary: Too many bananas for one man to eat!

Wendy: He's played in New Zealand? I never knew. Did he say anything sentimental about the lambs?

Ms Ninja: I'm sure you're not boasting, Ms Ninja. I am tempted to review Shatner's musical efforts on You Tube.

Yes, performed in 1993. And no, nothing sentimental about lambs. Such an opportunity for him to do so also :)

I'm pretty sure the individual Beatles stayed rich because they were savvy businessmen as well.

Wendy: He must have been been mourning for them silently. Poor creatures.

Michael: Not when they were Beatles. A fellow called Alan Klein helped himself to a lot of their cash.

You should check out Shatner's version of Rocket Man sometime. It's pretty epic.

That's funny about the monkeys on the roof!