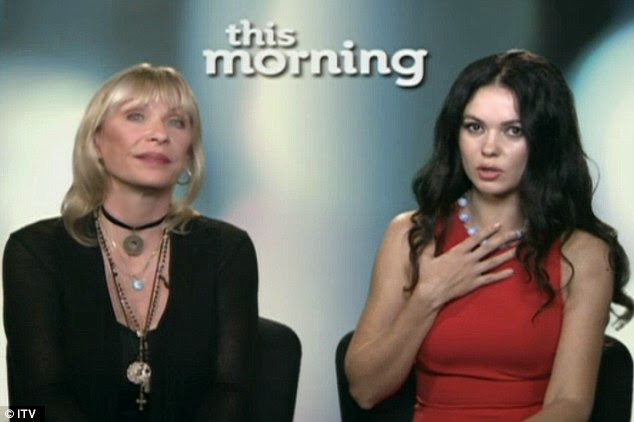 A married woman who claims she had sex with a ghost has appeared on British TV:

“I couldn't see anybody but I could feel the pressure, the energy, the warmth pushing in different directions,” said Natasha Blasick, a lissom young brunette. “The first time I was very confused by all of that but then I just decided to relax and it was really, really pleasurable.”

This confession was received with the utmost sympathy by the folks in TV-land, who never thought to inquire whether Natasha had felt any guilt over her adulterous liaison. Everyone seemed to assume that being with a ghost was an exceptional situation that entitled her to behave like a hoochie.

One has to pity her husband, of course. It’s unlikely that being cuckolded by a ghost is grounds for divorce, and he’s probably afraid of being haunted if he makes a fuss. He’s in a similar position to Uriah the Hittite after King David had his way with Bathsheba. May the Lord protect him in his tribulation and woe.

On the other hand, it’s quite possible that Natasha imagined the whole thing. I’ve heard stories about women getting sexually aroused by electromagnetic fields or fungal spores. In my view, her husband would be well within his rights to jump on top of her the next time she has one of her ghostly episodes. If a man can’t give his wife a good seeing to while she’s fantasising about being ravished by a spectre, he may as well shave his head and become a Buddhist monk.

Perhaps we should all be thankful that this ghost, if it exists, is just a horny rascal with a taste for hot brunettes. One that modelled itself on Jack the Ripper doesn’t bear thinking about. I’ll never forget how disturbed I was by the opening scene of Unforgiven, the Oscar-winning western starring Clint Eastwood (“He who befriended the orang-utan”, as he is known in the jungle). Those who have seen the movie will recall that a cowboy slashes a prostitute with a knife for giggling at his tiny todger. After watching the film, I immediately phoned my friend Smacker Ramrod to ask whether the cowboy’s grievance had any legitimacy.

“None whatsoever!” he declared emphatically. “Loads of women have chortled at my John-Thomas and it never bothered me in the slightest. When a woman laughs at something, she’s a hair’s breadth away from petting it like a poodle. I would often make self-deprecatory remarks about my dick to encourage a few titters. It’s when they react with horror or disgust that you’ve really got problems.”

“Oh Smacker!” I exclaimed. “You were the wisest of swingers and the noblest of rakes! When I hear you opine on the issues of the day, my affection for humanity grows bigger than a hippo’s arse!”

Perhaps Natasha Blasick should consider what would happen if she giggled at the appendage of the lecherous phantom that enjoyed her sexual favours. I wouldn’t be surprised if it blew her out of the window. 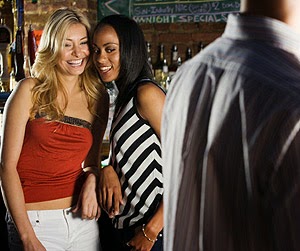 Comments:
Sex with a ghost? Reminds me of the rape scene in the movie Hollow Man. That scene freaked me out when I initially saw it; indents of fingers in skin where there were no fingers to see. This was one of the odder Kevin Bacon movies ever to find its way on to celluloid...

Did she make room for the idea that it was her husband and it was dark?

I'm assuming her husband is not a fan of ghostly emissions and didn't avail himself of sloppy spectral seconds?

I think it was probably her imagination. I have imagined a lover and actually "felt" it because my imagination was so good!

Well, whether it was imagined or a real ghostly appendage she felt, she sure got her 15 minutes of fame.

No, It's happened to me. REALLY. Nearly every night, in fact. I feel it pushing its warmth, trapping me, forcing me this way and that, clasping my body in its spiritual grasp......then I wake up and realise I'm trapped in my King size quilt. Bugger.

When a woman laughs at something, she’s a hair’s breadth away from petting it like a poodle. - Love that line.

I thought I was having sex with a ghost once but it was just gas. Imagine my relief!

If there's been any laughing at my better half, it's been done behind my back, thank god. I appreciate their courtesy.

Herman Turnip: Being raped by an invisible man is much worse. You can always think of it as a spiritual experience with a ghost.

Michael: It doesn't seem to have entered her head. Maybe her husband was in the spare room making whoopee with the ghost's sister.

Steve: Are you implying the ghost was bisexual? That's a hell of an assumption to make without evidence.

Rose: That's wonderful, Rose, and I'm sure your imaginary lover never forced himself on you.
There ought to be a discussion group where imaginative women can compare notes.

Mary: I have since discovered she is a minor actress, so I doubt she'll be satisfied with 15 minutes.

Juliette: You sound a little sceptical, Jules! Maybe your king size quilt is preventing stray ghosts from getting close to you! See what happens with a more seductive linen sheet!

Exile: Farting is what happens when you get fisted by a ghost. So you've never even talked about your todger with a woman?

send her to an exorcist. that should stop the little strumpet from carrying on with spirits.

I thought I knew everything there was to know but your friend Smacker Ramrod has schooled me proper. Self-depreciating penis jokes equal penis affection. I suppose if they can view it as a pet... puppies sure do get a lot of love.

Strange things in night?
This reminds me of Slimer in Ghostbusters. Do you think she was a fan of the movie? She looks too young.

I have never seen "Forgiven", but that opening scene sounds a bit gruesome to me. Is having relations with a ghost even possible? The new program could have at least had a paranormal expert on to answer that.

Smacker Ramrod.... That one went straight into my long term memory. The name, not the rod.

I think she's just a media whore, GB. My goodness, I've had sex with men whose penises I couldn't see either, but I don't go boasting throughout the media about it.

I keep thinking of the scene in Ghost, where Patrick Swayze's spirit enters Whoopi Goldberg's body to kiss Demi Moore, and everyone seems satisfied afterward. I'm sure that many men would line up to be the host body for this mysterious ghost even though he/she (possibly a hermaphrodite) doesn't seem to need any additional help. Your friend Smacker Ramrod has a vast understanding of the human condition, as well as a wonderful way with words!

Billy: That might work, as along as the exorcist didn't try his luck with her.

Scott: I hope it works for you, man. You've got to use all the tools when you're looking for penis-love.

Bill: I don't think she'd enjoy that movie. She believes in letting ghosts have their way rather than busting them.

Jimmy: We know so little about ghosts, Jimmy. Some say they are airy things with no substance, while others claim to have felt their touch. Are you sure you haven't seen 'Unforgiven'? It won the Oscar for best picture. Maybe you blanked it out of your memory because of the trauma it caused.

Blue Grumpster: He was the circus vet who smacked the rumps of many horses.

Robyn: You're too much of a lady to boast, Robyn. Maybe a pair of opera glasses would have helped you size up the goods on offer.

Julie: I do remember that scene, Julie! Demi Moore was so pretty in those days that even Whoopi would have enjoyed kissing her. I'll pass on your kind words to Smacker. He'll be delighted that a lady of your refinement and experience has a high opinion of him.

Gorilla, I have always intended to see it because it won the Oscar and was directed by Eastwood... but no, have not seen it yet...

GB, that's a terrible idea!! You write, and I quote " her husband would be well within his rights to jump on top of her the next time she has one of her ghostly episodes..." but that would mean her hubby buggering the ghost! Gross idea, I'm shocked you could even suggest such vile opportunism, Mr Bananas.

This on British TV? Now I’m quite dispirited. It seems like nothing more than a transparent attempt to get attention.

Though if she got preggers with a ghost baby, that might bring up a new interesting philosophical discussion regarding abortion.

Hmm, if more people forward I smell a reality show in the making-- Sexual Hauntings.

I don't doubt her for a second because I saw Dan Akroyd have sex with a ghost woman in "Ghostbusters." I also saw Demi Moore have lesbian sex with her dead ghost husband channeled through Whoopie Gholdberg's body. God damn, that was a gross and strange scene.

Joe: Haha, Joe, that suggestion was contingent on the ghost being imaginary! Obviously it's a very bad idea to bugger a ghost who then might inflict dire revenge on you!

Drake Sugar: You're probably right, Mr Sugar, because the woman is a little-known actress who obviously wants to enlarge her public profile. I'm pretty sure ghosts are sterile, because no one has ever seen a ghost baby.

Cocaine Princess: It would be an invitation to every hoaxer and fantasist, Miss Princess.

Dr Ken: Did Demi really go all the way with Whoopi? I wish I could remember that scene better!

Of course the hubby has grounds for a divorce.
Not, as you rightly said, with the reason that he was cuckolded by a ghost, but because his wife is a screaming nong.

Was it Patrick Swayze? Did Whoopi appear to break the whole thing up? Did anybody yell "Ditto"?

Hmm, you're probably right but then again you never know what TV corporations such as TLC will do for ratings these days.

TS Bastard: Hah, you can't divorce your wife for that! Many men would consider it a positive trait!

Linda: It was the Ghost with No Name, possibly played by Clint Eastwood. I'm glad no one tried to break it up - nothing would be achieved by ghostus interruptus.

Cocaine Princess: They'll do whatever they can get away with, Miss Princess.