The scent of a hoochie 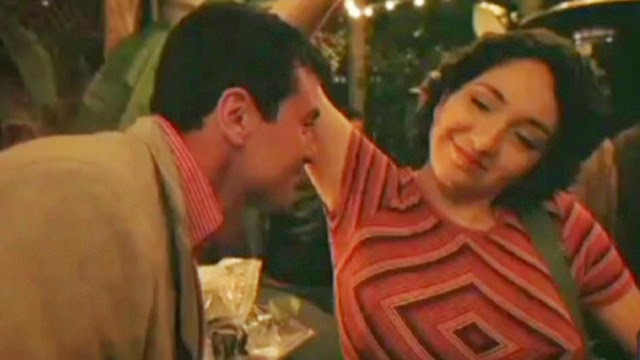 Have you ever been to a pheromone party? Apparently, they’re the latest craze afflicting trendy young humans who aren’t sure who to have sex with. To get invited, you have to sleep in the same t-shirt for three nights in a row and bring it along to the party, where it is sniffed by potential playmates like a mature cheese. Couples who like each other’s body scent can then cut to the chase and discuss their favourite mating positions.

As a method of courtship, it’s supposed to be more reliable than chatting someone up because smells don’t lie. No longer will lads pretend to be gentlemen when they’re really the most frightful bounders. Nor will girls feel obliged to be coy and ladylike when they’re really the most awful harridans. Sniffing the pheromones will bypass all the posturing and get to the crotch of the matter.

That’s the theory, anyway. Being a suspicious ape, I detect a possible loophole in the system: it depends on the t-shirt odour being authentic. What is to stop an evil-smelling rogue sprinkling aromatic oils and aphrodisiacs over his garment before submitting it to the party manager? The human being is a cunning animal: if you give it the chance to doctor its juices, its juices will probably be doctored.

When I invited the manager of the safari camp to comment on this development, he said:

“Basically these are parties for ugly people hoping to attract someone with their smell because their looks can’t do it. A dog that smells of catnip might find a willing pussy.”

“Pithily put, manager, but what about good-looking people who smell bad?” I asked. “Didn’t your wife give you a bottle of deodorant last Christmas?”

“It was part of a toiletry set including shower gel and aftershave,” he replied defensively.

The manager does have a point about looks, though. Pretty-boy actor Paul Rudd was recently led through the streets of New York City by a garrulous comedian, who asked passers-by if they would have sex with him for a dollar. Most of the women replied heartily in the affirmative, often agreeing to waive their one-dollar fee. And at no stage of the proceedings did anyone attempt to sniff Mr Rudd to find out whether he smelt as good as he looked. For humans, the eyes are the sultan and the nose is the eunuch who guards the harem.

Yet strangely enough, there is an actor who thinks being too pretty has hindered his career, denying him challenging roles that might have won him an Oscar:

“When I was a teen idol, I was so goddamn pretty I wouldn’t have taken myself seriously,” lamented Rob Lowe.

My simian heart bleeds for him. If I were a Hollywood big shot, I would offer Rob a pheromone audition for the part of Peppy Le Pew, so he could dazzle us with his French accent, comic timing and ability to fart on cue. He deserves the opportunity. The only problem might be finding a casting director willing to sniff his butt. 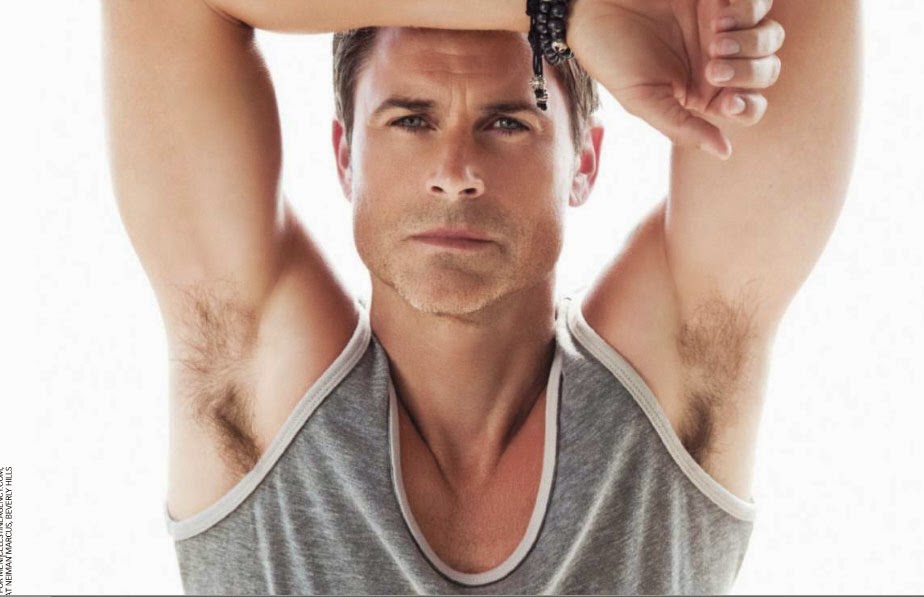 Comments:
I agree the t-shirts can be doctored but the whole idea of a 3 day old unwashed t-shirt is ridiculous anyway. Stale sweat does not equal attractive pheromone scent. Don't the pheromones have to be fresh? I don't think primitive man attracted a mate by wafting a 3 day old bearskin under the nose of his chosen partner. Tradition has it that he used a club - the prehistoric version of Rohipnol.

i think alcohol might be a key ingredient in those pheromone parties. a smart man might want to be the only guy in a clean t-shirt at one of those affairs.

"pheromone parties"? Are you kidding me? Have we fallen down the ladder of evolution or suddenly become too hip for common sense? Sure, my fully-loaded baked potato smells divine, but I wouldn't consider dating it. What about personality? Humor? Looks? Sure, I've known quite a few potatos that could put some women I've known to shame but damn it, I'm a guy, a visual creature, and can't help but focus on looks, then personality, then hygiene. I need a good to decent score in all three categories.

But hey, that's just me. I guess I'm shallow.

A dog that smells of catnip might find a willing pussy.” What a fabulous line!

Aren't pheromones supposed to be a subliminal thing. Like, sweaty smells that you can't really smell; like whistles that you can't hear? If some 3 day t shirt wearing, neanderthal tried to woo me this way I'd march him straight down to the local launderette. That's why God invented Persil and aftershave.

Mr Gorilla bananas - I don't know what kind of sorcery is abound but my comment repeated itself a gazillion times It just KEPT BREEDING! I've tried to delete all the extras and I'm so sorry to have ballsed up your feed. I think it must be your pheromones.

I always thought this pheromone business was phoney baloney. Is someone going to be attracted to someone butt ugly just because of their pheromones? Or maybe good looking people also have good pheromones?? As far as Rob Lowe is concerned, it is his own fault he was typecast as a pretty boy. A great actor also has the ability to alter their appearance when a role calls for it.

Great post! I agree, it is the visuals that are the most potent source of attraction; maybe one's smell is more likely to lose us a sexual mate rather than win one?

Steve: There's no such thing as a stale pheromone: it's a good there are no biochemists here to mock you for that schoolboy howler. Stale smells are caused by bacteria farting or something similar.

Billy: You could be right, but blaming pheromones sounds better than blaming booze. Pheromones are a force of Nature.

HermanTurnip: Baked potatoes smell good, but they don't smell sexy. If you were a caveman sitting in a dark cave, pheromones might be the only thing that could get you in the mood.

Rose: Haha, Rose, how many tricks do these desperate guys have, I wonder? Someone should write a book about it!

Juliette: You could be right, Jules. Wikipedia says testing the response to pheromones requires "cleanliness and odorlessness in human participants". I enjoyed cleaning up your multiple comments, Jules! It reminded me of a bird that couldn't stop laying eggs!

Jimmy: Pheromones are supposed to attract you to a suitable partner for breeding purposes, whether or not that person is butt ugly. Do you think butt ugly people can have beautiful children, Jimmy?

Bryan: I'm not sure you can actually smell pheromones, Bryan. They work in a mysterious way by targeting receptors in the brain.

Oh dear I am so glad I am off the singles market. Is this a real thing? I have on occasion sniffed hubby's shirt in the morning when he's left for work but it was fairly clean *1 day wearing* and it smelled mostly of his cologne. I just don't think a three day old sweat smelly shirt is gonna be attractive at all.

I shudder to think that my sons might be invited to these steamy pheromone parties. It's frightening how low some people will sink to try the latest trends. Pretty boy Rob Lowe knows how to sell books.

If I ever find a woman whose armpits smell like bacon, she's going to be in big trouble.

I didn't see the Rudd stunt. Funny! But I've heard the Lowe lament. Not funny.

Smelly T-shirt for 3 days? I must tell Sonshine (aged 13) to abandon the overpowering Lynx and just go with the sweaty approach.

I think 13 year old girls would rather have the Lynx!

P.S. I'm nearly blind and it's all your fault, sir. Rob's pits are the limit of all things decent.

Hmm, choosing a mate by what their t-shirt smells like. You'd think we as humans have evolved more than that.

I am not a geneticist, Gorilla, though... Some people have good genes but ugly themselves up through a rowdy, and reckless lifestyle, so yeah, I suppose.

Mary: Maybe you should experiment a bit more with your hubby's laundry , Mary. I'm not saying it'll smell good, but you might find something that stimulates your glands.

Julie: You can check up on your sons by finding out whether they're withholding t-shirts from the wash, Julie. Although it might be better to let Nature take its course.

Exile: I don't think it's possible to eat a woman's armpits - they're far too ticklish. What does the Rudd stunt say about the women of NYC?

Alison: That might be good advice, Alison. A boy aged 13, needs to accentuate his masculinity rather than tart himself up with scent.

Blue Grumpster: It could be your sense of smell that's lacking. Maybe you should ask a few women to sniff your sweaty t-shirt.

Cocaine Princess: Humans have evolved more than their hormones, Miss Princess. That's why they're so conflicted.

Jimmy: So you don't think it's possible for Justin and Selina to have an ugly child? How about Charlie Brown and Lucy?

I did hear Rob Lowe on Howard Stern bitching about how pretty actors don't get certain roles because no one would believe someone that pretty would be a pirate, for instance.

Also, basing who we sleep with based solely on their stench is insane. Never mind if they stimulate our brains, let's just go right to the butt sniff. How animalistic. All that aside, I'll try anything once.

I'm thinking if I splashed rum and vanilla all over my shirt, I just might get every guy in the room sniffing around me.

"Sniffing the pheromones will bypass all the posturing and get to the crotch of the matter." Best sentence ever written.

Rob Lowe does have a point. It's always the half-tard roles that win the Oscar. It's not like he could have played Sling Blade or Forest Gump... he's too goddamned pretty.

Rob does have nicely curled eyelashes and daintily feminine lips in that photo. I can see why a Director would rather bed him than give him a leading role in a dramatic movie. Poor girl. I mean guy.

There is a grain of truth in the smell business.

I know when my Beloved is getting "in the mood" as I can detect a sweeter pheromone on her breath.

Saves a lot of time.

Dr Ken: You say "animalistic" as if it's an insult, Dr Ken. Maybe you need to discuss the idea with your drinking buddies.

Menopausal mama: You mean they'd want to take advantage of a lady they thought was drunk? How very ungentlemanly!

Scott: He could have uglied himself up with a false nose. It's easy to make excuses for failing an audition.

Suburbia: If you want proof, I could organise a field trip!

Robyn: Are you calling Rob a girly-man, Robyn? That's the language of The Governator! What's Arnie up to these days?

TS Bastard: Yes, no Scotsman should have to woo his own wife. You're lucky to have found a way to avoid that chore.

I laughed but think there is something to this smell thing. That said, one night's tee shirt would suffice for me.

I'm glad you said that, David. A wise old dude like you must have picked up a lot of scents in his time.

This is awful. So awful. I don't even like my OWN smell after sleeping in something for three days, let alone someone else's. So awful. x