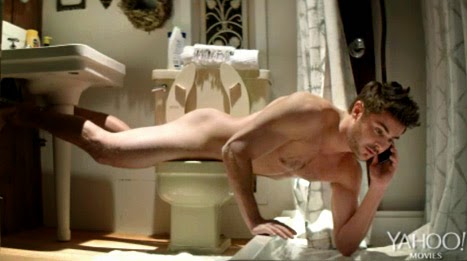 Does this look like a dangerous stunt to you? I put the question because the actor pictured above is boasting about his skill and daring in pulling it off:

“I always take pride in the fact I do my own stunts,” said Zac Efron, a presentable boy from the Disney stable.

The scene was enacted in a film called ‘That Awkward Moment’, which I haven’t seen. I do not question its artistic merit or relevance to the plot. A naked man does not attempt to impregnate a toilet bowl without good reason. What I find impossible to believe is that Master Efron was risking life, limb or lingam by configuring himself in that position. Even if someone had pulled the flush, his todger would have survived to tell the tale. If he wants us to believe it would have been sucked into the vortex he’s even more boastful than I thought. Homo sapiens is not hung like a horse in this part of the Milky Way.

Zac Efron is a lad who seems to have a penchant for bold and unequivocal statements. In an interview for a ladies’ magazine, he was asked whether he would sleep with a woman on a first date.

“I don’t object,” he replied. “Sex is a beautiful thing.”

On this occasion, I believe he said the right thing. It would have been all too easy to give a politically correct answer to avoid appearing wanton and louche. The problem with such a reply is that no one would have believed it. It is better to be thought of as an honest man-whore that a smooth-taking deceiver.

The last fellow I remember saying that he never had sex on first dates was a movie character called ‘Jimmy the Saint’, played by the saturnine Andy Garcia. In the film he appears in, he meets a beautiful girl in a bar and charms her with many words of an extravagantly complimentary nature. After escorting her back to her apartment, she invites him in for milk and cookies or something. He then informs her politely of his first-date rule, and she gives him a look of wistful admiration tinged with aching disappointment. The door shuts and he walks away, only to return twenty seconds later for a coffee and a shag. Rules are made to be broken, even for Jimmy the Saint.

If you haven’t seen the movie, it has the informative (if overlong) title of ‘Things to do in Denver when you’re dead’. I found it immensely fascinating, although I should warn you that it contains many scenes of horrendous violence: a vicious crackpot punches corpses hanging from meat hooks in a cellar; a taciturn assassin called ‘Mr Shush’ goes around shooting people in the anus; Jimmy himself beats up several hoodlums before getting beaten up himself. And the ending is not particularly feel-good either. It’s the kind of film we show to tourists on safari when they return to camp disappointed because they haven’t seen a lion kill. 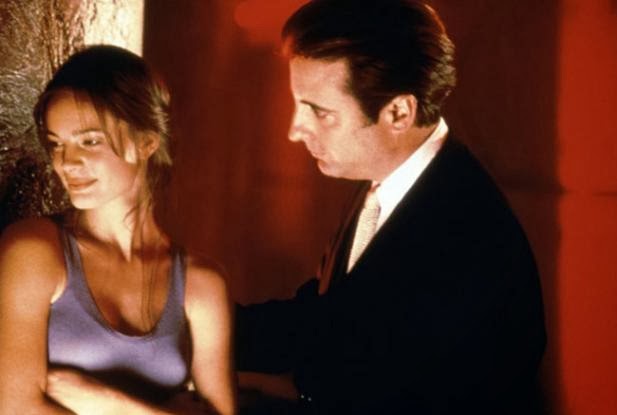 Comments:
The only strange thing that I have done to a bog basin....was get my foot stuck in it after trying to hang a blind

I would so do that. But, I guess you know of my penchant for photography and toilets.

With the way our three-year-old seems to miss the toilet perhaps I should start training him to use the potty using this pictured technique.

If you hear someone say they will NOT do so and so, don't take it to the bank. I have never seen a case where the person who made the statement didn't eventually do exactly what they said they would not.

Efron is either an idiot or he thinks the public is.

The honest man-whore does remember to put the seat up before use. Depending how everything goes that trait might be what the woman remember of the first date.

I'd like to see Mr Efron try that stunt with a flushing Boeing vacuum toilet at 30,000ft. I wonder if he will have emptied himself before the flush cycle completes?

John: I hope it wasn't stuck there for too long. There's a danger of trench foot in such cases.

Al: I was aware of that, but I didn't know you had a thing for nudity too. It's not the kind of stunt I would have expected from you once you left the navy.

Herman Turnip: Poor chap! Maybe you need to install a urinal for him. Impossible to miss if they're constructed correctly!

David: But Efron didn't say that! He's not as stupid as he looks, which admittedly leaves plenty of room for a fair level of stupidity. Is Zac Efron the kind of boy who might have a following in your neck of the woods?

Bill: I don't think it makes the man-whore more honest, but it's certainly a lavatorial blunder to be avoided on a first date. Don't women also expect the seat to put down again after use?

Steve: He'd have to be a contortionist to do that in an airplane. Maybe if they installed a window in the look he could stick his legs out of it. At 30,000 feet, his bits and pieces would be frozen solid.

That is not a dangerous stunt unless he drops the phone in the toilet and gets electrocuted. If that happened, perhaps I would rent this flick. As far as I know about the only noteworthy thing this actor has done is date Vanessa Hudgens. That relationship didn't work out, supposedly because Zac is gay. But, I don't know. As for "Jimmy the Saint", it sounds like his rule is just some bs to impress the chicks. I doubt there is anyway to enforce such a rule anyhow.

Hello Mr. Gorilla Bananas! My first blog read of the year( sorry I've been a lackadaisical blogger so far this year) and you didn't let me down on the imaginings of Zac Efron's hanging todger!

I may have to see this film now. I like the idea of an assassin named Mr Shush.

I desperate to use our loo and see if I can adopt this position without dying. Well done to Mr Garcia for getting the decision right eventually...

What is the stunt exactly? Being naked? Like that's such a sacrifice when you have 0% body fat. That dude has been trying to play "older" for years. Just go with it, junior.

i'd like to see him do that to the dirtiest toilet in scotland.

It depends on whether he can play football and if he goes to church. I don't think there's much demand for naked men as I've never seen any in local toilets.

For me, that would be a dangerous stunt if it weren't so common. Ugh, that always happens to me. He's cute.

Jimmy: Now that you've suggested he might be gay I can't get it out of my head. Did the Vanessa girl actually say she was his beard? I'd never disbelieve a woman who said she was a beard - it must be humiliating thing to admit.

Juliette: Hello, Jules, it's great to have you back! The news is that Zac's todger might be gay, but I'm sure that won't bother you. Mr Shush is called 'Mammy Rammer' by one of his victims, which is another reason to see the film.

Nota Bene: Try it when you're desperate to have a pee if you want the experiment to be of scientific value.

Exile: I think he's proud of maintaining a horizontal position with minimal support. The nudity is just for show. I agree it's not that impressive. Maybe he needs an older dude like you to show him the ropes.

Billy: Aren't there dirtier ones nearer the equator? He could get venereal disease from a toilet in Mali.

David: If you've got football, you must have cheerleaders. Do you think those girls would start whooping if you showed them his picture?

Mis Anthropy: Have you tried it yourself, Crazy Mama? He's cute and he's gay, but maybe you could turn him. I wouldn't bet against you.

"Sex Is A Beautiful Thing"

-no argument from me as I definitely agree with that statement.

Gorilla, it's a pretty strong rumor that most people seem to believe is true. Or it could have started because he is always singing, and dancing, and likes to wear lots of make-up...

Are we sure that's a real stunt. I'm pretty sure I've slept like that on those occasions I've come home drunk and everything looks like a comfortable bed... xx

Aw, Gorilla, you are going to get me into trouble. I can't be showing no nekkid pictures to young ladies. So we will just have to add this to the list of mysteries.

I could do that stunt! I just know I could. But I wouldn't, it would be far too cold for the old mushroom :)

Take away the toilet and have him in that position doing a wang-stand, and then I will be impressed.

“Sex is a beautiful thing.”

Once, I will offer up a very similar statement like that to the wife in the hopes of being rewarded. Her response was short and to the point.

"So is silence and being left alone." The evil gleam in her eye and the nearby diabolical collection of scissors on her crafting table told me to go no further.

Cocaine Princess: I'm glad it's always been beautiful for you, Miss Princess.

Jimmy: All actors wear make-up, so that doesn't prove anything. His ex-girlfriend is the only person I'd take any notice of.

Scarlett: I hope you kept your clothes on, Miss Scarlett. You wouldn't want to wake up thinking you'd had sex with a toilet bowl.

David: That's a fair point, David. Maybe you could just mention that you saw the picture and let them google for it themselves.

Joe: I think you could do it too, Joe! How about trying it wearing a merkin to keep the mushroom warm?

Dr Ken: That would be better than the Indian rope trick, Dr Ken. Maybe it's possible with a wang like a tree trunk.

Beach Bum: Female gorillas can be just as uncooperative. Better ask her if she's in oestrus next time.

I would so do that...man. He just wants to show off his delicious looking body, by the toilet bowl gets the best perspective.

I have never heard of that movie.
And looking at Zac Effron picture just makes me ask why.

Robyn: I thought you'd like him, Robyn! It's rumoured that he's gay though.

Ruth: Why is he in that position or why was he born?

its a hilarious act rather than a stunt

I suspect it was a five-star chemical toilet He wanted to have a blue one too.