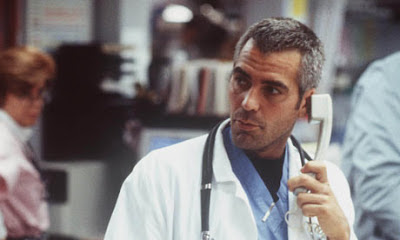 It’s common knowledge than women find men in uniforms attractive. Even we gorillas know that. But is it possible they prefer doctors to soldiers, sailors and firemen? That’s what a recent survey suggests, indicating that 61% of women go weak at the knees when they see a man in a white coat.

My regular readers will know that it’s my habit to ask the manager of the safari camp for his input on such conundrums. Unfortunately, he was out collecting narcotic toads when I arrived, so I asked his wife instead.

“The explanation is obvious, GB,” she said. “Doctors make the most money.”

“Now why didn’t I think of that?” I replied. “I had some cockamamie notion of women being turned on by arrogant men who can order them to undress and examine their bodies with impunity. But obviously that’s nonsense. Thanks for putting me straight.”

“Madam, you are too kind.” I replied. “Regrettably, I don’t spend very much time thinking up arousing daydreams for women. There’s so little need for it in the jungle. But if such a fancy does occur to me, you’ll be the first to know.”

You’ll notice that I refrained from sniggering when she mentioned George Clooney, whose appearances in ER could be part of the reason for the survey results. What’s funny about George is that the affection women have for him appears to be largely unrequited. So great is his liking for the society of men that his big sister had to issue a statement denying he is gay. I personally never doubted George’s preference for carnal relations with women. It’s just their company he finds irksome. Maybe he was severely hen-pecked by his college sweetheart…or his big sister. These things can happen to the machoest of men.

I’m not convinced about the importance of the white coat, though. Clooney would clearly be attractive to women in any uniform apart from a clown’s costume. Dr McCoy, on the other hand, never wore one on the Enterprise and was far from being a hit with the babes. I can only remember him getting into one promising situation with a woman, and he gave her the following line:

That’s not the sort of remark which makes a girl feel desirable. Wearing a white coat would not have helped with that level of seduction skills.

Of course, it’s reassuring for a woman to know she’s with a man who only peeks in a professional capacity. This could not be said of the two scoundrels who fell through the ceiling of a lady’s lavatory in Duluth. Star Trek might have been created to educate such brigands. 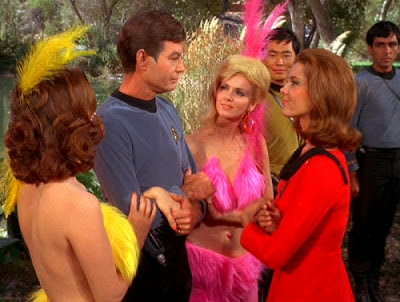 Comments:
HaHa I live this first hand. My hubs is a plastic surgeon, and despite being short, skinny and bald, women fawn all over him because he has MD behind his name. Little do they know that is the least of his many talents!!!!!

61% of women go weak at the knees when they see a man in a white coat?

Plainly that is the effects of chloroform.

I'm thinking, though, if those men wearing white coats also carried butterfly nets, those ladies would hit the hills in a hurry.

doctors also have access to a lot of good drugs. so they got that going for them too.

Keeping it real: Your husband sounds like a remarkable man and I'm sure we'd all like to hear more about his talents. Maybe he ought to hold classes for short, skinny, bald men.

John: You think doctors are sensitive after getting through medical school? They know the flesh, not the spirit. However, some of them might be good actors.

Steve: Or laughing gas if it's a dentist. It might also be fear for some women.

Al: Women aren't afraid of shrinks; they love them most of all! Shrinks are great listeners. Mad women might be scared of them I suppose. Do you know any mad women?

Billy: Yeah, I bet they boinked a lot of hippy chicks in the sixties.

Herman Turnip: They don't all look like George Clooney, though. How do you explain the attractions of the short, bald, skinny ones?

I'd say that's an accurate observation. Women love men in uniforms. I know this because I'm the only university teacher who wears Italian suits in my neck of the woods. I myself lean more towards women who've just taken off their uniform. I call them Eve.

George Clooney... what else?

I think women would swoon over Clooney even if wore a clown costume. They're so shallow that way. They never seem to fancy a poor man of real substance, like myself, for instance. Bradley Cooper is the new George Clooney, anyway. Even sex symbols get old and are replaced. Inner beauty is eternal.

I only ever saw Clooney as a doctor in that Friends episodes, and he came off as a creep. I'd go for a fireman though, mainly because I'm very accident prone x

I am sure Dr. McCoy would have got plenty of chicks on Star Trek if it were not for Shatner's ego. As for those dorks from Duluth... imagine going through all that trouble to watch women poop. Don't they have the internet yet in Duluth, Georgia yet?

If it was the white coat, we'd be drooling over the butcher too (which, by the way is banned under the Environmental Health Act). And talking of 'Bones' Star Trek garb isn't exactly a proper uniform is it? It's just that they all wore the same naff jumper.

Mrs. Penwasser is pretty mad at me right now.
Does that count?

I don't understand why people find George Clooney so sexy - wearing a doctor's uniform or not. But put a firefighter's uniform on him, and then I'll see what he's got. (Firefighters are hotter than doctors.)

Blue Grumpster: Who would pay a professional Peeping Tom? Your university? It must be an interesting place to work.

Mr UB: Hey, you've had your fair share! Maybe not as big as Clooney's, but it isn't a competition. Did you see the picture of Clooney's sister in the link? I think she'd appreciate your inner beauty.

Scarlett: Yes, a fireman could carry you away from danger. I'm assuming your weight is reasonable here.

Jimmy: I would guess they were hoping to see the women urinate rather than defecate. That's the more common fetish. There's a rumour that Hitler got off by watching women pee.

Broken Biro: Good point, Ms Biro. It can't be the white coat per se, but only what it symbolises, i.e. a man who's qualified to feel you up. If your uncle's a gorilla I probably know him. If he's a human, the chances are slight.

Al: It counts if you can count the nuts in your nutsack.

Robyn: I'm glad you can past a man's bank account, Robyn! I don't think Clooney has ever put on a firefighter's uniform. Maybe he doesn't have the butt for it.

They're supposed to STAY in my nutsack???
Oh, dear.

I don't find George Clooney attractive. I never have.


As for the two peeping Toms, talk about morons. Unless they have some kind of weird fetish, I agree with the comment that reads: "Just what is the point of looking down at a woman sitting on the toilet?'

Well, my middle name is Tom and they pay me to peep, so yeah, it's interesting.

The manager's wife is sure correct about your unbelievable intuition, but I've told you that in round-a-bout ways before. I have the same idea about Clooney. He likes fucking women, but then wants em to go away. As far as uniforms, I'm partial to firemen, but it's because they're so brave and rugged. Oh and gorilla suits, but that's just my problem. Btw, you can sit in my tea cup anytime. I'll even have one made extra large.

I am not too big of a fan of men in uniforms, but then again I work a ton of cops and firefighters and find their egos repulsive.

However I don't think George Clooney was ever more attractive than he was in ER.

It's true though that doctors make a ton of money BUT they're always too busy to spend it.

Guess who gets to spend it? Their spouses.

Al: You should only remove them if you want to offer someone a snack. Better teach your wife some nutsack etiquette.

Blue Grumpster: The expanding range of disciplines in academia is breathtaking.

Crazy Mama: Good choice, Crazy Mama. They can also put out fires if something is burning. Your teacup looks like a great place to hang out, but I'd have to abseil into it to avoid breaking your china.

Stephanie: Ah, that's interesting. Do they like being Mr Macho and showing off in front of the girls? It seems you liked Clooney most when he was young, which is understandable.

Dwei: That's why doctors should marry women like 'Keeping it real' who make their own money.

oh GB. pilots make the most money but their attitude turns me off big time. eeeks. i've met very few doctors with an attitude.

Cocaine Princess: Ah, Miss Princess, you like the pretty boys!

Jaya: Have you not met any arrogant doctors, Jaya? Things must be different in Asia! Pilots are the same everywhere, I think.

I can't say I've met a truly arrogant doctor, GB.
They're mostly nice or cranky. I could forgive them for the latter.

Dr. McCoy isn't one to sniff at. Sarcastic and skeptical, but quite capable when it came down to it.