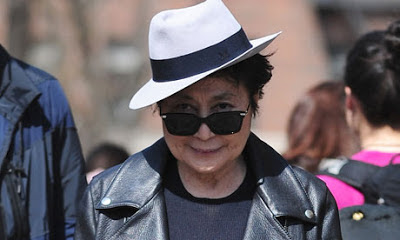 Yoko Ono is 80! Her birthday was actually in February, so I’m offering her my belated best wishes. I hope she’ll understand how difficult it is to keep track of celebrity birthdays in the rainforest. I only really notice the passage of time when the crocodiles start humping.

What a fascinating human being Yoko is! People have often wondered how a demur, soft-spoken Japanese woman could be so barmy. I blame it on the American military occupation of Japan following World War 2. When a teenage girl used to a diet of steamed rice and vegetables suddenly starts binging on chocolates and Coca-cola, it has a similar effect on her brain to LSD. She later did take acid, of course, and her disordered mind began to make weird connections, such as noticing the humour in men’s private parts. Did she laugh at John Lennon’s dick? It wouldn’t surprise me, but I doubt it damaged their relationship.

I once made the mistake of discussing the break-up of the Beatles with the manager of the safari camp. I said it wasn’t Yoko’s fault because the lads had already grown apart and were following diverging paths. This provoked a furious response:

“Of course it was Yoko’s fault, you ignorant ape!” barked the manager. “You don’t have a clue what was going on behind the scenes! She put a hex on the band and made weird mewling noises when they were rehearsing. If it wasn’t for her interference, John would be alive today and the Beatles would be playing in the Cavern!”

There was no point arguing with an irrational outburst like that, so I turned my back on him and farted before returning to the jungle.

The good news is that Paul has settled the issue by stating that Yoko didn’t break up the Beatles. What a nice thing to say after all the spiteful words that ping-ponged between them. Paul must have realised that there were bitchier women than Yoko on the face of the Earth after his divorce from Heather Mills. Whatever nasty things Yoko said about him, she didn’t cost him 30 million bucks. Let’s hope he goes to watch her perform at this summer’s music festival in London, where she’ll be singing the songs that John recorded shortly before he was assassinated by the mad assassin.

Another person who ought to go to the concert is Bjorn Ulvaeus, who praised the Beatles in a recent interview. When asked whether the Abba girls got annoyed when their husbands were chased by groupies, Bjorn replied:

“You may find this unbelievable but we never really had them.”

It does surprise me that neither Bjorn nor Benny attracted a single groupie at the height of their fame in Abba. But “unbelievable” is a strong word, particularly after looking at old photos of the band. If Bjorn says there were no groupies, I will accept his statement as factual if he gives me his word as a gentleman and a Swede. 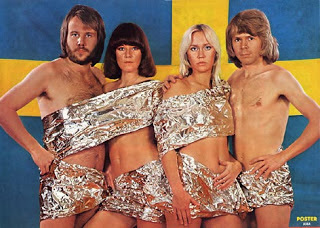 MAD AS A LARGE BOX OF FROGS

What time is it when crocodiles hump? I think you're right about the Coke and chocolate. I've heard so many disgusting things about the way John and Yoko treated Julian, I don't know what to think. But I hope I don't even know an Abba fan, let alone groupie. This is the first pic I've ever seen of them and my eyes are now seared. They look worse than they sound. What the fuck are they wearing? One long piece of Reynold's Wrap? Can't imagine why groups aren't flockin to them.

I'm not convinced Yoko is a female.

Oh sure, Yoko didn't break up the band. Yeah, right. Next thing you'll be telling me is that Paul isn't dead. ;-)

There is simply no rumour to the truth that Yoko was seen leaning out of the window of their apartment shouting 'There he is, thats him - get him, now!' at the time of Lennon's demise from lead poisoning.

ABBA look awfully healthy for chaps and chappesses who fought at Waterloo, where Napoleon did surrender, oh yeah. I remember in Poonah in '43 or '44 - I met my destiny in quite a similar way. The history book on the shelf is always repeating itself eh?

She's 80! Well I'll be damned. I don't know what I'd do without you Mr Gorilla Bananas.
She is bonkers though, innit.

With mullets like that, I actually find it highly believable that they had no groupies.

John Gray: Yoko was invited onto Desert Island Discs? Who says the BBC aren't bold? That one decision is worth the license fee.

Crazy Mama: Crocodiles hump during the humping season, Crazy Mama. Unlike girls from Kentucky who are always in season. Do you think Abba would look better unwrapped?

Keeping it real: Well, she might have had a sex change. Only her gynecologist knows for sure.

Herman Turnip: I think the 'Paul is dead' rumour was started by Jane Asher, who caught him in bed with another girl. She said "Paul is dead to me' and people forgot the last two words.

Sir Hutson: I'm sure Abba would have stiffened the ranks of the British army in Poonah. It's easy to wilt under enemy action in these hot climates.

Juliette: I prefer to call her eccentric, Jules. Her loopiness is entertaining. As for Abba, the girls look so much nicer than the boys.

I never thought about it but imagine what John would have made of Heather Mills! At least Yoko never bullied the help. To my knowledge.

Bjorn is right. I don't believe a word of it. What woman could resist that fleshy elegance wrapped in tin foil?

Ok...you have quite unintentionally crushed my spirits here. If Bjorn and Benny never had groupies even after selling a billion records, then that sort of destroys my plan to finally attract a mate by one day becoming famous. However, gorilla...if I may offer one mild criticism... you have been a bit remiss in not explaining how Bjorn and Benny managed to land Agnetha and Frida despite the obvious repulsion they inspire amidst the fairer gender.

As far as Yoko Ono is concerned, I am not really a fan (since stealing John away from his wife Cynthia shows a lack of character IMHO). I have been the victim of many of these manipulative YokoOno-esque interlopers, so I am kind of biased.

That abba photo, (that I can only assume is an advert for tinfoil) is the most harrowing thing I've seen in a lost time. Imagine if she did laugh as John Lennon's dick. That's quite a claim to fame x

That's a scary ABBA pic, Mr GB. I'd rather see some crocs going at it. So Yoko wasn't Paul's secret lover, was she? How could I've been so mistaken?

Swedish, blond and in a band but still no groupies? That is the ultimate definition of failure.

Yes. I accept that they didn't have groupies throwing themselves at them (Abba) as well.
Ewww. ;p

Mr UB: John would have laughed his head off at Paul's troubles with Heather Mills. He had a cruel sense of humour.

Jimmy: Bjorn and Benny wrote all the Abba songs, so Agnetha and and Frida were bowled over by their musical talent. That's another way of impressing the babes, Jimmy. As for Yoko, John chased her because he needed a kooky wife.

Scarlett: You're right - I'm sure far fewer women laughed at it than got penetrated by it. Yoko might well be the only one!

Blue Grumpter: Don't be so complacent about humping crocodiles. They'll make mincemeat of anyone who disturbs them when they're at it.

Steve: Having wives who could sing the pants off them wouldn't have helped their egos either. But the money might have consoled them.

Laura: Which of those manly chests would you prefer to rest your head on, Laura?

I wonder how they hump. I'm told their skin is pretty impenetrable.

I don't find the fact that Benny and Bjorn didn't have groupies to be unbelievable. What stretches credulity is that their main squeezes didn't look like Yoko Ono.

Yes, now you've mentioned it I do remember reading something about Yoko laughing at John's todger. She apparently saw John peeing, pointed at his beatlebug and said " WOW! it looks just like a penis, only smaller! "

that's a very nice hat yoko is wearing. i've been looking for a hat similar to that for several weeks but so far no luck.

I actually like the combination of Coke & chocolates, in particularity Coke Classic and a Reese Peanut Cup.

All these years people believed and blamed Yoko for the breakup and hated her for it. I guess now it's just an urban legend. I wonder why Paul waited so many years to release the statement?

Yoko should make up for breaking up the Beatles by breaking up shitty bands, like Abba. Actually, Abba was pretty cool in their own way. She should have broken up Nickleback just before they made that song about being a rock star and going to the coolest bars and all that crappola. God do they stink. Just because she is 80 is no excuse why she can't go on a Breaking Up Bad Bands Tour.

Blue Grumpster: They have soft underbellies. It's just a matter of getting in the right position.

Joe: She only said that to get back at John for making her accompany him to the toilet during the filming of 'Let It Be'.

Billy: It looks like a Panama, Jimmy. Should be available at a good hat store.

Cocaine Princess: A naughty indulgence, Miss Princess. Paul has reached an age where he wants to let bygones be bygones. Even if Yoko did break-up the Beatles he'd still want to be friends with her.

Dr Ken: I'm not sure she still has it in her, Dr Ken. Don't forget she broke up the Beatles by marrying John. I've not heard of Nickleback, but a band with that name should have been strangled at birth.

A naughty but very tasty indulgence.

I have been wondering what outfit I should wear to block out the alien's breast- and pelvis-scanning waves, while still stylishly showing off my shoulders and navel. Now I know. Thanks, ABBA!

I think they'd look better with their faces wrapped. And you said you could tell the passage of time so I thought it was like crockwork.

BTW, you know, John Lennon's dick may have been especially funny..

So was Marilyn Monroe.
And look where that got her.

Yoko is an impressive, intimidating woman. ABBA, on the other hand, is/was a talented bunch that never should've posed in front of a camera.

Sarcastic Ninja: Your vital organs would be safe as long as the aliens didn't attach electrodes to the foil.

Crazy Mama: I think he exposed it on an album cover, Crazy Mama. If it makes you laugh I'll look at it myself. I trust your sense of humour on these matters.

Al: It got her a date with President Kennedy. You might have got a date with J Edgar Hoover.

Our paths have crossed. We were married on the same day, in the same registrar's office, in Gibraltar. Later I cut most of her clothes off at a show in London, and I own a couple of her 'art-works'. I'd better not say more; she might sue!

I wish you would say more. Their nuptials in Gibraltar are quite famous, being referred to in The Ballad of John and Yoko. Did you exchange pleasantries?

No, but the Registrar did say that she looked like a small rat.