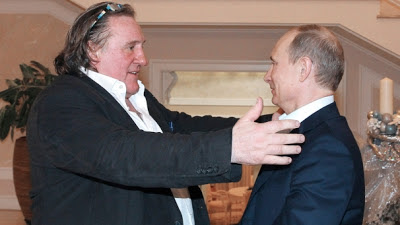 Very clever of Mr Putin to grant Russian citizenship to Gerard Depardieu. If nothing else, it will help alleviate the chronic shortage of fat men in the country. The governor of Mordovia, a region famous for its prison camps, has invited the potato-shaped actor to settle there. As the only nightlife in that part of Russia involves climbing up watch towers and pissing on stray cats, it’s not an offer that’s likely to be accepted.

Let’s hope Depardieu does something to revive the moribund Russian film industry. I once saw a Russian movie in an art-house cinema: it was incredibly grim and depressing – nothing but revolting masses and angry men with beards. I can’t understand why the Russians, who were the first humans in space, don’t make more science fiction pictures. How about a Russian version of Star Wars in which Depardieu plays Jabba the Hut? Or a spin-off from Star Trek in which Chekov is the captain of the Enterprise and Depardieu is the Grossovian ambassador from Fattus-5? The great thing about a galaxy class star ship is its replicating machines made it impossible to run out of food.

The real reason for Depardieu’s departure to Mother Russia is his wish to avoid new taxes imposed by the French government. The president of France has described him as “shabby and unpatriotic” for refusing to dig deep into his pockets. My sympathies are with Depardieu here. If governments are short of money, they ought to earn it themselves instead of grabbing the assets of hard-pressed entertainers. I remember getting a visit from a tax inspector when I was a highly paid circus performer.

“Leave me alone, you accursed leech!” I barked. “I give my spare cash to worthy causes, not to upstarts who harass me with impudent demands! We will resolve this matter in a court of law!”

This led to the famous test case of Regina v Bananas. The high court ruled that philanthropic primates should be exempt from human taxes on the grounds that their natural generosity would impel them to devote a fair proportion of their wealth to the public good. It was a Magna Carta moment for the gorilla nation.

I’m glad to say that not all Europeans are as bereft of money-making ideas as the French government. A Czech woman has come up with the ingenious venture of selling advertising space on her breasts. This is her sales pitch:

I am a beautiful young girl and I offer my breasts for greeting cards and adverts. Send me your message and I’ll send you a pic with it written on my breasts.

Her charges are very reasonable and the demand for her services is soaring.

“It’s good value for money,” said one satisfied customer. “But I’d pay double if I could write the advert myself.”

Maybe Depardieu could make up with the French government by offering them free advertising space on his arse. There’s enough room there for the Marseillais and the Declaration of the Rights of Man. 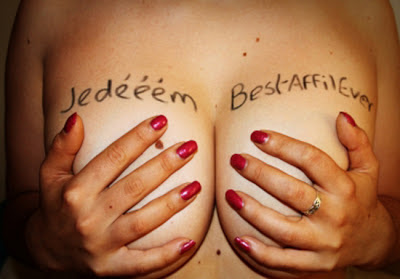 Comments:
Looks like Gerard is going to eat Vlad's head.

High taxes are what got certain members of the Rolling Stones to live the U.K., and now Gerard Depardieu to leave France. This is one of the many benefits of high taxes on the wealthy. If Gerard Depardieu lived in my country, I would be happy to pay higher taxes if it got him to leave. Russia is welcome to have that blubbering, drooling lard ass if they so desire.

The last time I saw Depardieu he was sprawled out over the sides of a wheelchair, unsightly

Whilst I am in much bon accord avec Mr Deppydew - the current gangsta-squeeze on individewals in England is 50% followed by 20% of the rest when you spend it (not counting the 80% directly on fuel, including, curiously, paying 20% VAT on the fuel-duty tax!) - I don't think he realises what life under Pewtin will be like. At least the Froggees - I mean, les Frenchies - have some vague rule of law in the land ...

Odd how the semi-conscious minds works, innit - what with you linking a dirty great tit with advertising on breasts.

Excellent digs at Mr. Depardieu's girth. The Frenchies wanted him to surrender up to 75% of his income for taxes! I'd have run to the warm, welcoming arms of Putin, too.

She has a mole on her breast. Am I the only one who notices?! That calls for a discount.

So if the girl sends the breast-advert as a photo, does that mean the advertiser can use that photo anywhere? Could there be dozens of billboards plastered with breastograms for different products? In which case, surely she should expand the operation to include other girls, so as not to lose public interest with the same set of gazongas all over the place.

i didn't get to where i am today by trusting russians and i suspect gerard will find that mother russia is not the land of milk and honey.

It will all end in tears when the French bang him up for spying for the Russians when they catch him sending coded messages scrawled across the breasts of Czech agents or as microdots disguised as moles.

How much would she charge for "Steve was here"?

Al: He looks as if he's already eaten plenty of heads.

Jimmy: I'm not convinced he'll go through with it, because he'll have to live in Russia for 6 months a year to pay their low taxes. Maybe he'll hide out in Belgium instead.

Lost Jimmy: Oh dear - had he eaten something that disagreed with him?

The Owl Wood: I wouldn't call those tits dirty - a bit spotty perhaps, but not dirty.

The Jules: Yes, I always preferred him to Asteriski.

Mr UB: I noticed that mole and a few other smaller ones. She has also written the message above her boobs so she can cover them with her hands. Poor show all round, I feel.

Sarcastic Ninja: Who knows what the public would think, Ms Ninja? They may develop a sentimental liking for her jugs. But you raise a good point: she should have negotiated royalties for billboard displays of her assets.

Hippo: I don't think he's cut out for espionage. The spirit may be willing, but the flesh is unwieldy.

He really is potato shaped. Good description, GB. Russia likely has enough acres to accommodate him.

I don't know where to start. I'm kind of stuck on advertising breasts right now. Really? And what the hell has Depardieu been eating?

Mr Pilgrim is on the on the money, I feel. Depardieu is attracted to Russia by the notion that the rich can basically do what they like and buy their way out of trouble, but only until they offend that utter bastard Putin. Then they get banged up in a gulag and starved, which might to GD a bit of good 'cos he's a bit of a fat sod these days.

Here in France we are all quite amused by the notion that Obeliski might now need a work permit to make films here.

That is a hideously high tax burden, even for a richie, for whom I usually have little sympathy.
You'd think that young woman would cover that large mole with her hands.. which makes me wonder if she is in fact hiding several larger moles, hmm

Robyn: Maybe they should bury him in the ground and see if he sprouts. Potato plants produce attractive flowers and green leaves which soak up carbon dioxide, so it would reduce his carbon footprint.

Juliette: Everything he can lay his hands on, Jules. Apart from breasts, which he chews without swallowing.

Jon: He's tied his flag so firmly to Putin's mast that I can't see him getting into trouble unless the ship goes down. If that happens, he might rediscover his Frenchness.

Winopants: Yes I agree, Miss Molytits has oversold her assets. Perhaps a woman in her line of work should have them surgically removed.

That's not too bad of a deal... That kind of ad would get a lot of attention...

The arse advertising isn't such a bad idea. It's good to see that Gerard has developed a giant fat face in his twilight years so that it at last could catch up to his bulbous nose. That was mean, but he is a tax dodger and unpatriotic, after all.

the breast ad isnt too bad. would it work on road safety campaigns, GB ?

I wonder if I could sell advertising on my acne.

DWei: Paying for both breasts is well worth it, in my opinion. A one-hooter advert would look incomplete to me.

Dr Ken: Everything about him is fat, including his wallet.

Jaya: Maybe a simple message like "Drive" on one breast and "safely" on the other would catch men's attention before they crashed their cars.

Unknown Mami: That would depend on the size of you acne, Mami. Is it big enough to accommodate a skincare message?

Gorilla, those tits would be perfect if they didn't have moles on them. I hate tits with moles on them and find them distracting and somewhat disgusting. Thanks for asking my opinion. I know it counts a lot. :)

Depardieu is getting fatter by the second. Can't he be placed in a jungle? I doubt if he would be missed.

I suspect no one likes tits with moles on them, so your opinion is useful in confirming my conjecture. Depardieu wouldn't last 5 minutes in the jungle.

Potato-shape & the Jabba The Hut reference is too funny.

What a lovely sight to see on my first visit here. I'm not bothered about her moles--they're either neutral or a positive. She's got lovely tits, as we say in the vernacular up north.

Before the erroneous notion that Mr Depardieu is paying 75% of his income in tax becomes established in people's minds, we shouldn't forget that this only applied to income above a million Euros a year. No sympathy from here!