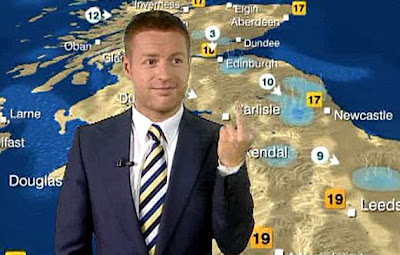 Hats off to the BBC weatherman who flipped the bird on live TV. The raised middle finger of Mr Tomasz Schafernaker appeared on-screen after the news anchorman had made a snide remark about the accuracy of his forecasts. The camera then moved back to the newsreader, who squirmed in his chair like a man with a boil on his arse.

There is no media functionary more deserving of a defiant gesture than the TV news anchorman. A pompous upstart who thinks that reading an autocue and pulling smug faces entitles him to esteem needs to feel the scorn of the masses. An erect digit sets the perfect tone for further affronts and aspersions. The weather presenter, by contrast, is an honourable and morally courageous actor. Those who make forecasts for a living, thereby running the risk of getting it wrong and looking like a pillock, deserve the respect of the righteous.

When I mentioned this uplifting story to the manager of the safari camp, he missed the point entirely.

“I don’t approve of men giving the weather forecast,” he remarked irrelevantly. “That’s a job for tasty girls in skimpy dresses. After watching the news, you need something soft and visually appealing.”

“Would you like me to buy you a Teddy Bear?” I asked facetiously.

He responded to my quip by raising his middle finger, which I interpreted as a laboured attempt at irony. He then ambled off to sit at his desk and play with his balls.

I should mention, in passing, that I have nothing against female weather presenters. Back in my circus days, I remember a young lady called Ulrika Jonsson who delivered weather bulletins on a commercial TV station. She did her job competently enough, but I instinctively knew that it was merely a stepping stone for greater things. She later proved me right by having an affair with England’s football coach and saying the word “scrotum” on daytime TV. I believe she now has four children, each sired by a different father. It is a reproductive strategy that would make a female gorilla envious.

Engaging though Ulrika was, I don’t recall her doing anything interesting with her finger on TV. Flipping the bird may have been too confrontational for a Swedish coquette, but there were other more feminine options. She could have appeared on a cookery program, sticking her finger into appetising dishes and sucking it clean, possibly while making ecstatic noises with her eyes shut. It’s little touches like this that persuade viewers to jot down recipes and look for the right ingredients in the supermarket.

As for Mr Schafernaker, his intrepid finger has nothing more to prove. The cowardly executives at the BBC may banish him from the live studio, but a man of his calibre is bound to find another outlet for his talents. I would put him charge of the switchboard dealing with complaints from viewers about nudity and bad language. I’m sure he’d find novel ways of responding to their concerns in a sensitive and understanding manner. 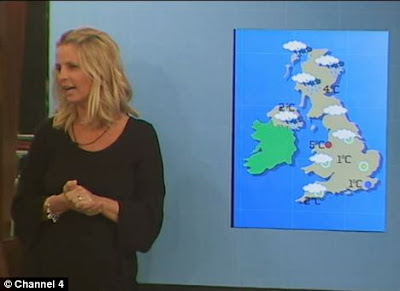 Comments:
I think he should be fired - the arrogant anchorman, that is.
xoRobyn

Damn I as hoping I'd be your first (commenter).

Good for the Schafernaker. With a name like that, he's got to do something bold.

Reminds me of Janet Jackson's "wardrobe malfunction" during the Super Bowl. Showing her nipple for roughly .02 micro-seconds cost the network millions in penalties.

I remember hearing about the incident; we were at a Super Bowl Party at the time, the TV was on, but nobody was watching it. Instead we were [-- CENSORED --]

Who has a boil in their arse? Would you like me to lance it?

They're under a lot of pressure to get it right, these weatherman. Check out Matt DiNardo when he worked in Utica, NY (surprisingly, he now has a new job in Richmond, VA):

There's a picture up on the notice board of my local pool showing healthy young Americans having a good time in the water and happily mugging for the camera, unaware that certain gestures mean different things in different cultures. "Oh look," said my 11-year-old daughter, pointing at one lad with his digits splayed. "That kid's telling us to fuck off."

A knighthood for that weatherman, please.

Robyn: Unfortunately I think his job is safe, but there's nothing to stop him getting the finger again.

VAGB: I wouldn't be surprised you were related to him, Ms Vodka. Maybe you should check your family tree.

Robert: I never saw it either. She should have re-enacted the incident so everyone could judge for themselves.

Nursemyra: You should do the opposite of pricking his boil, Nursie.

Suzanne: Rude words, but who the hell was he talking to? I prefer the direct insult to a bad case of Tourettes.

Indie Pop: I admire your daughter's detachment. I'd like to think the Queen makes similar remarks on royal visits to Australia.

Kyknoord: Yes, it's a pity he scratched his face rather than maintaining his finger position.

That's too funny! Maybe he was just showing the anchorman where 'arlisle was? Poor little town of Carlisle - triggering such an unnecessary sh*t-storm. - G

I have the feeling that me miss a lot of interesting situations happening offstage at the TV studios. Surely more interesting that what we're supposed to see. Perhaps if there was a chance of knowing more about this 'secret life', the telly would be a lot more interesting than it is now and the audience figures would raise dramatically.

I think you're too smart for a blogger blog..no disrespect to blogger of course...I'm just saying your voice is intelligent, witty, and needs to be heard by many more.
I read every word of this post.
And yes, I laughed out loud. You got me.

But did he get the weather right? If he did, then I can forgive him everything. If not, off with his finger.

So, here's quite a few things I need to address:
1. no, I haven't turned into a witch. I'm just my usual boring self.
2. even though I am indeed in a dark mood (to put it delicately), reading your blog always cheers me up
3....and you know, the reason I almost never comment here is because the stuff you write is so good that I don't know what to add.
4.There's this TV weatherman in one of channels of Polish TV who is so barmy (yes. and I mean it) that every single day he comes up with a saying about weather. they're all meant to look like these old, traditional sayings, and he even always begins with "there's this old Polish saying..." and then he blurts out his own poetry. I have no idea why they won't fire him :)

Georgina: Hello and welcome, Ms Dollface! It's a pity there isn't a town called 'Barse' he could have edited with his finger.

Leni: Yes, I bet they say some interesting things when the microphones are off and the music is playing. "Thank God it's over" perhaps.

Sandra: Hello and thanks, Sandra! I never knew I was too smart for Blogger! Where do all the clever bloggers blog?

Madame Defarge: Hope you're feeling refreshed after the holiday. Madame D. I feel sure his forecast was vague enough to be right.

Misery: Hello Gabriella! How eccentrically sweet of you to reply to me here! I am, of course, delighted that you like my stuff and that it cheers you up. That Polish weatherman sounds wonderful - a real character, like your good self. Of course they should never fire him! I wish there was a clip of him on You Tube with English subtitles. Take care, dear girl, you're too special
to live in darkness.

haha I loved how he tried to brush it off straight after.

I'm thinking I want to see and old bird do the news...

OK, slightly unprofessional, but a slur on one's professional reputation is a serious matter. I understand that these weather people have a difficult job pointing at maps and remembering not to confuse high & low pressure.

Under the circs I think he was very restrained. Perhaps he gave the anchorman a quick tweak of the goolies in the hospitality suite after the gig just to hammer the point home.

I've heard that Ulrika does a lot of interesting things with her finger.

Reading your post, I'm almost tempted to start a cookery program of the kind you describe!

I love male weather person with erect fat digits. I know, too much information.

Ms CSW: Yes, he looked as if he was trying to rub his nose off his face.

Ms JTILIS: I think quite a few old buzzards have already read the news.

Jon: Goolie-tweaking is very chimpish - I favour the good old-fashioned kick in the arse.

Rachel: You're the first person to mention Ulrika, Rach. Wasn't she a bit before your time?

Eve: Do you like sticking your finger into tasty dishes, Eve?

Ms Wannabe: I am always intrigued to hear of your likes and dislikes, ma'am.

*Slow smile*
I'll have to say yes to that, GB :-)
Interesting thing happened today; I buy chinese takeaway from the same shop very often, and have taken to ordering it in bulk (for all my friends); the other day, the unseen owner of the handphone number that I call to order the food sent me a 'how are you' message - so we fell into conversation, but after I kept asking food-related questions (regarding the shop's menu and which food he liked to cook best), I stopped getting any replies.....

He must have thought you were only interested in his cooking - which may indeed have been true.

Ulrika. Ruined my life, that girl did. And Prescott was born in Prestatyn. One of Us!