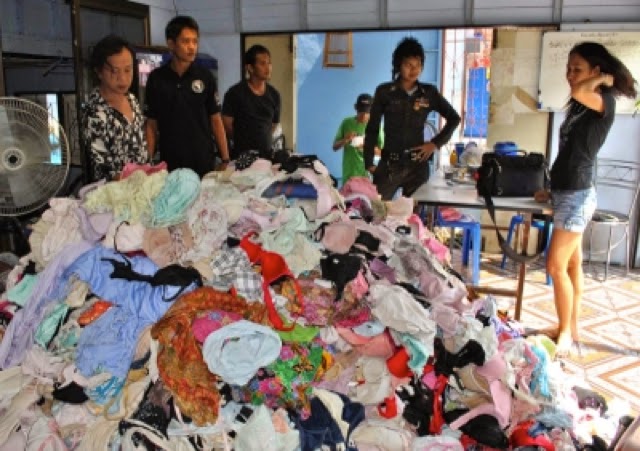 I’m glad to hear that the Chinese authorities have not disclosed the full name of the panty thief recently arrested in the city of Yulin. His family name is said to be Tang, but that shouldn’t reveal his identity. There are vastly more Tangs in China than women who’ve had their knickers stolen. Mr Tang’s guilty secret was discovered when a ceiling collapsed under the weight of his contraband, said to number in the thousands. Women living in his apartment building had been complaining about their disappearing underwear, so it was easy for the police to join the dots.

Preserving Mr Tang’s partial anonymity will make it easier for him to lead a normal life if and when he is cured of his fetish. At the relatively young age of 30, he should respond well to aversion therapy and a diet rich in insect protein. Sadly, job opportunities for ex panty thieves are limited, even in countries with a good record of rehabilitating offenders. I don’t know what his career plans are, but I think he’d be pretty safe to employ in my neighbourhood. There is very little underwear to steal in the jungle.

I’m going to mention Mr Tang’s case when I visit the safari camp on New Year’s Day. The manager’s wife is terrified that a new world war will start in 2015 because of the film about Kim Jong Un. She arrived at this conclusion after reading threats of dire revenge made by the North Korean regime, which the BBC foolishly published on its website:

“Making and releasing a movie on a plot to hurt our top-level leadership is the most blatant act of terrorism and war and will absolutely not be tolerated,” declared the regime’s official spokesmen. “If the US administration allows and defends the showing of the film, a merciless counter-measure will be taken,” he added.

I’ve already told the manager’s wife that the North Koreans can’t make war without China’s support, but she doesn’t believe that China will restrain them. I will cite the case of Mr Tang to demonstrate the growing maturity of the Chinese. In the dark days of Chairman Mao, knicker bandits were publicly humiliated and forced to eat their own toe jam. Economic modernisation has brought China to accept that ideological subversion is not the root cause of every strange act. They now realise that many of their citizens have mental problems, which has brought them closer to the West.

As for the film, it seems that North Korean attempts at cyber-blackmail have failed because crowds are queuing to watch it at independent cinemas. I fear that many of them will be disappointed. A movie isn’t guaranteed to be good just because it offends Kim Jong Un – otherwise you could make a fortune by filming a fat Korean oaf wallowing naked in pig excrement. Thus far, the critics are unimpressed and the rabble are unamused. The pudgy upstart of the peninsula might yet have his vengeance by making his enemies waste their time and money in crowded movie theatres. 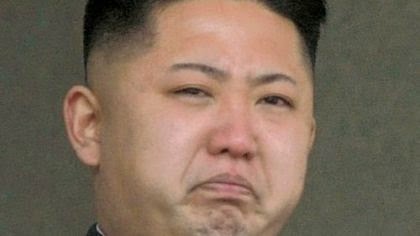 Comments:
Pfft. The number of panties I've stolen in my time would make Mr Tang look like a passing amateur.

I kinda feel sorry for Mr. Tang. That's an overwhelming amount of panties to choose from each morning.

is his first name poon?

Finally we now know the answer to one of life's most puzzling questions-- just how many panties does it take to collapse a ceiling?

I believe the Korean's countermeasure will merely be a very unfunny version (i.e. accurate) of the Black & White Minstrel Show with an actor playing Barack Obama as the lead performer.

The funny thing is that every one I've talked to about the movie who has seen it has said it's not good. So maybe the joke is on us.

Michael: That's quite a boast, Michael. Do you give them to charity or use them yourself?

Robyn: Yes, life will be much simpler for him in a prison with standard issue briefs. Happy New Year to you, Robyn!

Billy: Haha, that would certainly be his nickname in many parts of North America!

Cocaine Princess: I'm sure the question is entirely hypothetical for you, Miss Princess. Ceilings are of sound construction in Canada.

Steve: I'd like to attend the auditions for that production. They might give the lead role to Ben Stiller with his face blacked up.

Mary: The joke is on people went to see it in the cinema, Mary. I will rely on You Tube clips.

Did the story mention if the panties were laundered or not? That could pose a health hazard. And we all know how the Chinese government is obsessed with environmental causes.

You are very brave. Aren't you afraid of Fearless Leader stumbling across this post while Googling his name and him leveling the jungle in retaliation?

Happy New Year, sir. It's already 2015 in Australia. Ready or not here it comes.

Ah, haha. How about someone making a youtube video of Kim Jong Un frolicking around in a giant pile of ladies knickers. It would be sure to start World War IV.

This is the single most romantic thing I have ever read.

Undies??? I just do not get it. I hope at least that he stole clean ones. I bet it was a surprise to discover them all! Didn't think they weighed that much, especially most of what girls wear nowadays!

I'm also wondering why the panties were so heavy. Does Mr. Tang specialize in lifting loaded underoos? Talk about sticky fingers!

I dump them in my swimming pool and go nuts :)

Mr Tang's future clearly lies in a knicker factory. If a man has a talent, then nuture and exploit it! There's nothing wrong with a man who knows his lingerie.

Exile: I believe most panty thieves have a preference for soiled garments, but opportunities to raid laundary baskets may have been limited. Beggars can't be choosers. Kim Jung On will suck Obama's nutsack before he catches up with me.

Jimmy: He may take that as a compliment if the knickers were donated rather than stolen. Would you thank a woman who gave you her panties, Jimmy? A large number would make a comfortable mattress.

Fredulous: I assume you're referring to Mr Tang's activities rather than the film about Kim Jung On. Maybe you should sound out a few lady friends before taking him as a role model.

Rose: He might well have preferred them dirty, Rose. The collapse of the ceiling is a mystery - it must have been in a poor state to begin with.

Julie: He might have been wallowing in them when the ceiling collapsed. I suspect that many of the details of this case have been hushed up to protect Mr Tang from excessive ridicule.

Michael: You've got a swimming pool? Man, you're living the high life in Adelaide! The sight of panties in a pool must have driven many men nuts - how about a pool panty party for 2015?

Jules: That's a great idea, Jules! The only problem is that his preferences may differ from those of the typical woman. What makes a good pair of panties? That's a topic I'd be intrigued to hear you address in 2015!

The pudgy upstart has inadvertently furnished the makers of the film with considerably more millions than otherwise expected.

Perhaps they could buy some of that underwear ...

Al: Thanks to you, I've noticed for the first time that "epic" sounds like "a prick".

Wendy: True enough, but at least it isn't his money. Why should he care if his enemies exchange banknotes?