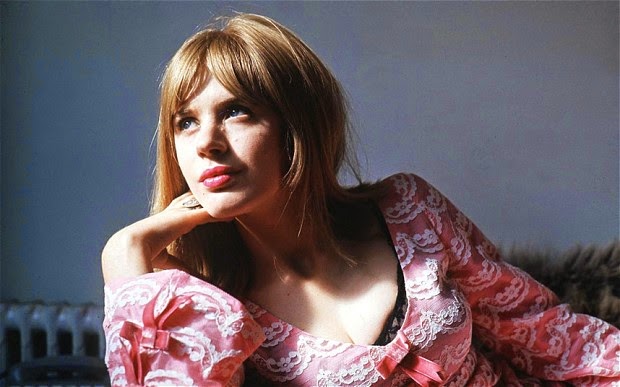 Marianne Faithfull says she is proud to have escaped the “straitjacket” of being Mick Jagger’s girlfriend. She makes it sound like a feat worthy of Houdini. It’s quite possible, of course, that Jagger did tie her up while attempting some devilish perversion. The 1960s are remembered as a decade of feverish experimentation, particularly for pop stars who spent the greater part of their leisure time as high as a kite. Yet, he doesn’t strike me as the possessive type in his relations with the fairer sex. Why would he chase after fallen apples when he could pluck a new one from the tree?

Whatever Mick did to her, she couldn’t have enjoyed it that much, because she cheated on him with Keith Richards, describing her debauchery as “the best night ever”. Keith had been eager to seduce her after his own girlfriend had been ravished by Jagger, and he later rubbed salt into the wound by claiming that Mick’s todger was too puny to have satisfied Marianne. There is truly no honour among cuckolds.

Ms Faithful may think of herself as a liberated woman, but her behaviour seems quite dated to me. Hopping from the bed of one famous man to another is what Helen of Troy did to secure her place in history. While it’s true that Marianne had her own musical career, her fame was obviously fuelled by her antics with the Rolling Stones. Her status was never comparable to that of Lady Gaga or Miley Cyrus, who are queen bees rather than concubines.

Miley has recently been in the news for having her bottom spanked with a Mexican flag. It must have been a token spanking, because a piece of cloth cannot smack a lady’s rump with the required force. Her stunt has nevertheless outraged the Mexican authorities, who have threatened to prosecute her. They are too easily offended if you ask me. Isn’t it obvious that Miley’s gesture was a submissive one, generously declaring her peachy posterior to be the property of Mexico? If the Mexicans don’t want it, there must be a dozen other tortilla-eating nations that would be delighted to claim it as a national asset.

Maybe the Mexicans are annoyed because Miley is an American, whom they subconsciously blame for the loss of Texas and California. Those festering wounds were later aggravated by scores of Hollywood westerns depicting them either as helpless peasants or bandits with bushy moustaches. It’s well-known that most Mexicans of that era were actually like Zorro – fearless swordsmen of noble birth whose moustaches were curly rather than bushy.

Let’s hope that Miley avoids a jail term for her well-meant stunt. Perhaps she could make amends for the unintentional offence she caused by starring in a movie showing Mexico in a positive light. I’d like to see her play an Aztec queen who eats tortillas and beans while being spanked with fly whisks made from the plumage of exotic birds. After watching a film like that, I would salute the Mexican flag whenever I saw it. 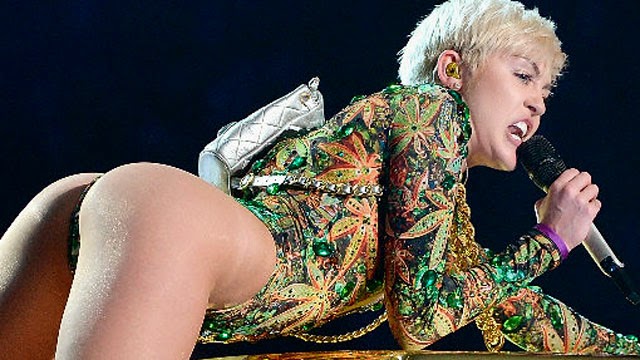 Comments:
Oh you just had to throw a picture of Miley in there didn't you. lol ugh

Maybe Miley did it because her fame was flagging?

I am using this comment box to cover that photo of Miley's rump, GB. It's a very scary sight. I don't blame all of Mexico for being offended, just the Mexicans who aren't blind, drunk, or stupid.

I am so glad that I do not watch this kind of news or read the rags about these types of shenanigans. I do not care what Mick Jagger or Miley or Keith does. I prefer to hear about authors, poets, people working to save our environment or create an antidote for a bad disease, or a researcher discovering a cure for cancer...maybe it is the mood I am in, but adding more to the "news" on these people is less than desirable to me.
I know of someone who has fought illness for several years and became a pastor to help others, and now he is in his last days on our earth. I would rather read or hear about his life.

I, too, am proud to have escaped from Mick Jagger. I hated the money and jewelry and clothes and constant jet setting. Is there any explanation for the spanking with the Mexican flag? Miley's ass looks very familiar. Oh, yeah, if I turn around partway in front of the full-length mirror, my ass is exactly the same.

Can I get fitted for the Scarlet Johanssan straight jacket? Strap me up! If Marianne were truly liberated she'd stop flapper her gums about it and move on.

Sigh... Does Miley just want us to hate her?

Mary: It adds something to the words, Mary. Would you spank her tush with a slipper?

Robyn: It's going to take me a while to work out whether you complimented or insulted the Mexicans, Robyn. :)

Rose: Let's hope Mick Jagger learns from his example and becomes a pastor himself.

Steve: History would be very different if the Mexicans had done that instead of attacking the Alamo.

Janie: So you had an affair with Jagger too? I wish I could say you were one of a select few, but unfortunately it wouldn't be true. Congratulations on your butt!

Exile: I might be able to get a blowup doll version for you. The real thing is busy making babies and I doubt you really want to assist her.

Michael: Maybe she's looking for laughs, Michael? I don't see anything to hate in her.

amnesty international should step up and defend miley and the biebs.

Perhaps I'm mistaken, but I seem to recall an old story about Marianne and a Mars Bar. Or perhaps I dreamt it; the 1960s could evoke some fantastical experiences.

Hmm. Odd that the Rolling Stones have stayed together for 80 years (or whatever it is) if stuff like that was going on. Though whenever someone mentions Keith Richards, I usually think of a really old guy who looks like a stoned zombie. Maybe he was more attractive looking in the 60s. As for the Mexican authorities, you would think they would have more pressing problems with crime then dealing with Miley Cyrus. Besides, Miley is tiny and would not fair well in a Mexican prison (unless she is sent to a celebrity prison with that tiny dog from the Taco Bell commercials).

The tortillas and beans serve as a potent punishment for all parties involved, unless the enforcer and photographer are wearing protective masks.

Miley should be attractive to me but there's just something about her that turns me off. It's not the raunchiness either. Madonna never bothered me so why does Miley?

"The 1960s are remembered as a decade of feverish experimentation"
Huh. I don't remember seeing any cameras in my bathroom.

Billy: The compaign would be more effective if someone locked them in the same prison cell. Human rights abuses would be then inevitable.

Bryan: The Mars Bar story was concocted by a policeman. He may have been exaggerating.

Jimmy: They stayed together because they couldn't hold grudges for sins that all of them were guilty of. Would you make a fuss about someone sleeping with your girlfriend if you were sleeping with the girlfriends of a hundred other men? Just imagine yourself in that positon, Jimmy.

Julie: Do you think Miley knows how to fart like a lady, Julie? I believe a book was written on that topic.

Scott: The expressions on Miley's face are often rather manly. It couldn't be her body that's putting you off!

Al: You must have missed all the fun. I hope you made up for lost time in the 70s, when 'Jaws' and 'The Village People' were kicking ass.

Funny post. Never liked Marianne. Not too interested in Miley. But the Stones? Well, reminds me of my 19th nervous breakdown!
Visiting you for the very time, via Kelly's Psycho-Carnival blog. I'll be back.

Yeah, I imagine if I was sleeping with that many women I would be too busy going to the pharmacy to pick up my Valtrex prescription than to have time left for a feud with Mick Jagger.

Eek, could have done without seeing Miley's bum!

The lives stars lead...although I guess we've heard worse stories on Jerry Springer, right? But I'm still puzzling over Mick Jagger and Keith Richards...I definitely don't see the appeal they clearly must have.

Dixie: Hello and welcome, Ms Dixie. That's a lot of nervous breakdowns for one person and I hope you don't have any more, with or without the Stones!

Jimmy: Mick Jagger wouldn't go near you if he thought you had the herp, Jimmy. The feud would have to be conducted via letters or go-betweens.

Kinley: They used to be young and their fans thought they were sexy. But that was ages ago, so I don't blame you for not comprehending it.

Miley is getting right on my nerves. She should have a flagpole shoved up her arse instead. That's make for much better news seeing how loud she could squeal.

Ouch! It wouldn't be a squeal of pleasure, not even from an elephant!