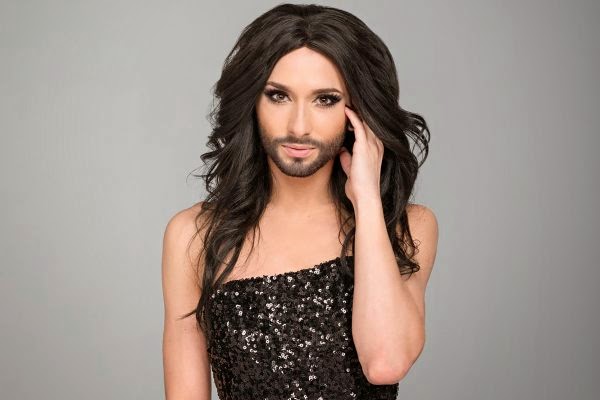 I wonder if Conchita Wurst has received any marriage proposals since winning the Eurovision song contest. I’m sure she’d make a good husband for some lucky woman. She obviously couldn’t be anyone’s wife with that beard on her face.

Bearded ladies were a popular sideshow attraction in the circus, but that was long before my performing days. They never thought to marry, because no man can tolerate strangers gawking at his wife’s beard. Conchita, however, is only pretending to be a bearded woman. She is actually a bearded man, so her facial hair shouldn’t deter eligible spinsters from popping the question.

Now it’s easy to dismiss a transvestite who grows a beard as a joker and a contrarian, but maybe Miss Wurst is making a serious point. A woman who dates a gay man to help him hide his gayness is commonly known as “a beard”, so maybe she’s telling the world that she doesn’t need a beard because she already has one. The manager of the safari camp pooh-poohed this theory when I explained it to him:

“If you look at her beard, it’s like pubic hair on her chin,” he said. “It’s her way of telling other gay men that her mouth is a sexual organ.”

“I think that’s taken as read, with or without a beard,” I remarked.

While most Europeans regard Conchita as a talented singer with an amusing demeanour, the Russians are highly disgruntled by her rise to fame. A politician called Vitaly Milonov has described her as a pervert who would turn Europe into a hotbed of sodomy. I would have thought that using phrases like “a hotbed of sodomy” is more likely to turn Europe into a hotbed of sodomy. Although I’m not quite sure what a hotbed is, it sounds like the perfect venue for crazy butt sex. I’ve got a feeling this Milonov character knows more than he’s letting on.

Now that Miss Wurst is famous, anecdotes about his childhood have started to surface. The pastor of the village he grew up in recalls how he longed to wear frilly dresses:

“He so badly wanted to dress like the girls and got upset when he wasn’t allowed," said Father Michael Unger.

His love of all things girly made him very popular with girls of his age, who would follow him around like groupies:

“Every day his girlfriends would go to his house to play,” recalls Stefanie Afornegger, a childhood friend. “We would dress up and sing and take photos of ourselves.”

“Boys envied him, mistaking his friendship with girls for romance,” added Max Schoff, his English teacher.

It’s often been observed that gay men find it easier to acquire girlfriends because of their greater empathy with the feminine. I’ve no doubt Conchita would be the perfect boyfriend, up until the point when his girlfriend stuck her tongue in his mouth. The men who have really got it made are the ones who can combine gayness with an honest love of poontang. It’s a form of hybrid vigour. 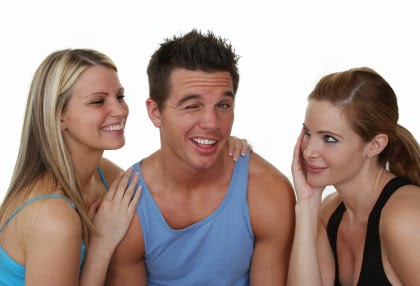 Comments:
I don't think I could marry a man who looks way hotter in a dress than me. Although I could use some of his makeup tips.

Thanks for visiting my blog and leaving a comment. I figured I'd swing on over and return the favor. Your blog certainly is unique, isn't it? You're terribly articulate for an ape... (Funny, too!)

I didn't watch the Eurovision song contest because I bloody hate it but did hear that a bearded lady had won. "Sounds about right", I thought, "glad I'd missed the debacle." Now this is the first time I've seen him and its rather fascinating. I'd definitely call him a piece of art since if I look at something for longer than my usual 3 second attention span, then its clearly piqued my interest. He's a very attractive woman isn't he, beard or not. Like a cross between Cheryl Cole, Victoria Beckham and George Best. The future is hybrid.

I was making out with Denise Clatworthy in high school and when I removed her bra, a patch of hair on each nipple was revealed. It was a big surprise. I kind of wish she had warned me ahead of time.

Women are drawn to gay men because they like the challenge. The conquest. The impossible dream. But man-on-man love is too strong. It never works out.

Conchita Wurst's beard is plainly very dense - for all it's been expertly salon styled - so I'm guessing he's fairly hirsute generally. I find it odd that he clearly waxes off his body hair and yet makes the beard a feature. True beard lovers take pleasure in their hirsuteness and cultivate hairy link-ups to all parts of their body so that a partner may track a finger (or some other organ) from one part of their body to any other via a path of glossy hair. Or am I the only person that does that?

I like your beard theory, better than the "beard as pubic hair" one. Maybe because I'm eating breakfast at the moment.

as a gimmick, the beard seems to be very successful. father ted must be turning in his grave over this.

Can't stop laughing at hodbed of sodomy. I like the whole beard look. I would totally grow one if I could, beards are very in this year xx

Ninja: Yes, he couldn't be allowed to upstage his bride. Maybe he'd agree to a wear a blouse and a kilt when you were out together.

Susan: Thanks, Susan, you're pretty articulate for a human!

Juliette: The beard suggests he isn't on hormone therapy, so he must be naturally pretty. Do you think he's more attractive than George Best? I think he'd be less selfish on the ball.

Exile: You think that's why women like gay men? I'm getting the feeling that the women of New York are a different breed. The hair you saw must have been around her nipples rather than on them. We must be fair to Denise.

Steve: Oh, do stop boasting. A silly little tuft on your chin and you think you're a silverback.

Scott: Strictly speaking, beards are a form of pubic hair, but your point about breakfast is well taken. I never realised it was that funny, but your judgement is clearly better than mine.

Billy: Yes, he must be the first bearded transvestite who wasn't a comedian.

Scarlet: You could always see how you look in a false one, Miss Scarlet. Remember the Jewish women at the stoning in Life of Brian?

It's time we stood up for women with genuine beards. I for one, would think you'd go ape over it.

I thought Europe already was a hotbed of sodomy.

Yes, I remember an episode of "Malcolm in the Middle" where one of the characters tried to pretend they were gay to score with a chick. The plan backfired when the chick ended up being a fundamentalist christian and enlisted him in some pretty intense "conversion/reparative therapy."

I wouldn't go so far as to describe him/her as a pervert, or with any of that hate expressed, but he/she is weird. And that's just too much facial and head hair to maintain.

Sorry I missed your last post, GB. I can't help but wonder why Jessica Alba's grandparents would watch her risque movies. She doesn't bare her breasts because of them? That's just weird too. xo

Vitaly must know something about perversion and hotbeds of sodomy that we don't and we all know what motivates homophobes. Conchita's look may not be to everyone's taste but Vitaly's view is repugnant to most.

Good grief you are funny. I don't have a problem with anyone. I'm a pretty open person and I think as long as it ain't hurting anyone else *unless you're into that sorta thing*, let everyone do what they want.

Julie: It takes more than a woman with a hairy face to confuse a gorilla, Julie. Hairy legs are a different matter...

Janie: No more so than San Francisco, Ms Junebug!

Jimmy: Why did it backfire, Jimmy? He could have pretended to have been miraculously cured and got into her pants in that way.

Robyn: I think he loves all the grooming and prettifying you ladies have to do, Robyn.

Mary: That's a very healthy attitude, Mary. And a necessary one with your neighbours!

The only male I've ever found to be cute looking while wearing makeup is Duran Duran's Nick Rhodes, and that was back in the 85-86 when it was popular among the Brit-groups.

RE: The article link on why women love gay men is interesting. I don't have any male gay friends but in overall I have more male friends than I do female. I just find I get along with them better.

That's how life works isn't it? The guy who's least interested in the girls is the guy who could have them if he wanted.

Your comment is there, Gorilla. Sorry about the inconvenience. I was at work... actually, I was asleep and then I was at work. I have to approve comments because of an evil troll that posts some nasty stuff otherwise. I really wish I didn't have to, but such is the world we live in. The "Malcolm in the Middle" character was kind of a loser in that episode, so he never scored.

You would have thought that using phrases like “a hotbed of sodomy” is more likely to turn Europe into a hotbed of sodomy... I would've thought so too. Maybe 'vital' Milonov has a few tricks up his sleeve that we don't know about.

So
many
questions.
Most of which are probably none of my business, but I can't help wonder about the monkey business.

Cocaine Princess: Maybe you need to befriend a gay man, Miss Princess. I'm sure you'd learn a lot from each other!

Michael: Yes, it's like cats rubbing against people who ignore them.

Jimmy: Are you sure the troll is still after you, Jimmy? It's seems incredible that anyone could be so obsessive, unless he has a specific grudge against you.

Joy: I'm wondering about the monkey business too. Where is it and who did it?