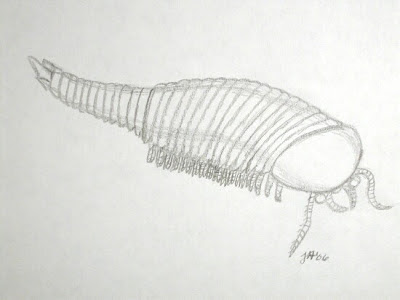 Scientists have discovered the fossil remains of a hyperintelligent woodlouse.

“No one would have expected such an advanced brain would have evolved so early in the history of multicellular organisms,” said an awestruck professor from Arizona.

The big unanswered question in why this brainy bug became extinct, whereas really stupid ones like the daddy-long-legs have survived to the present, entering buildings of their own free will and then crashing into walls like utter cretins as if someone had imprisoned them there. Could the woodlouse have been too intellectual for life in primeval earth, wasting its time playing chess and solving crossword puzzles instead of working out in the gym? Its brilliant brain wouldn’t have helped it escape from a big hairy spider – instead of running like hell it would have overanalysed the situation, making it an easy target. It reminds me of the nerdy doctors and lawyers who play paintball with regular Joes and get splattered from head to toe.

It’s probably just as well the woodlouse isn’t around today. The complex world of homo sapiens would be an ideal environment for it to thrive as a master criminal. A clever little bug could make its first billion by crawling into a mainframe computer and diverting funds to its offshore account. After that, it could run its criminal empire from a secret headquarters underneath a rock, sending out hit squads of killer cockroaches to eliminate its rivals and blackmail politicians. Pretty soon, all the aspiring hoodlums and gangsters would be paying homage to “The Woodfather”, pledging their loyalty by kissing the ring on its antenna.

Someone in dire need of a woodlouse brain is the man who made a scene at a restaurant because Richard Gere was flirting with his wife. The woman, a stunning blonde with melon-shaped breasts, was apparently “confused” when Gere started whispering sweet nothings into her ear. I don’t blame her. She must have been wondering whether he’d mistaken her for a man.

The husband reacted to the situation by growling at Gere like a cave man and chasing him out of the restaurant. He should have realised that film stars of Gere’s age are impotent – quite incapable of getting it up unless they’re primed with a cocktail of aphrodisiacs and strangled with a leather belt. Gere looks especially burned out to me. My considered assessment is that his libido matches that of an ageing slug. He may still have enough slime to flatter a woman with his well-trained tongue, but a man who has nothing but tongue can only go so far.

If The Woodfather were alive today, it would probably appoint Gere as its palace eunuch. It’s a job that perfectly matches his skill set. He could reprise his role in Pretty Woman by flirting with any prostitutes the woodlouse had hired for its own pleasure. That’s not something the hookers would mind too much. Being sweet-talked by Gere would put them in the perfect frame of mind to have a bug crawl under their skirts. 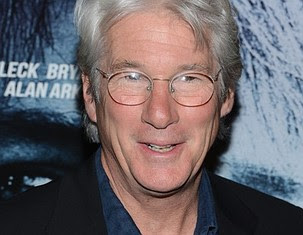 Comments:
It is a good thing the woodlouse is not around today.. a radioactive woodlouse might have stung some jerk, giving him amazing super villain powers. Then he would fight Spiderman to the death. Anywho, in the case of Richard Gere, he at least is aging better than Jack Nicholson.

I can see criminal mastermind as a possibility. However I think a perfect niche for the bugfather would be in the world of international espionage. Thankfully he is extinct.. or so they tell us

Are we SURE they're extinct? I believe I once worked for a woodlouse...

I'm quite sure I've slept with one of two woodlouses myself. I think Pearl's right, GB. More research is in order.

Richard Gere - Jack Nicholson.
All into CT like Sessecte is dishing it.
They say woodlouse took over Petwood stir fry .
And they then eat 22 Porkmj with Rporket.
Sausage gave way to chili and clams and Cattel .
And there went Moomen......

lol. you have a point there, GB. the bug isn't so smart afterall and it looks creepy too. maybe its downfall was arrogance - refusing to learn survival skills from the others.

Just what size of woodleeces are we talking about here? Dog-sized? Horse-sized? Were these dinosaur rivals, competing for spoiled brats to eat on cah-ribb-ian islands? I just can't see how they fit into creationist theory - the Holy Bibble says nothing about intellectual woodlousies. Were they even on the Ark?

Jimmy: What did Spiderman do when he wanted to pee? And what's Jack Nicholson been up to lately?

Winopants: He'd certainly be good at hiding in foreign embassies, but I'm not sure he'd be able to plant bugs, by which I mean listening devices. Maybe he'd have to be taught shorthand first.

Pearl: I'm not sure of anything, Pearl. Was it an understanding boss?

Robyn: That sounds pretty traumatic, Robyn. I hope you kept your eyes shut until it was over. Isn't that what good girls are supposed to do?

Anonymous: Is that a poem or a coded message?

Jaya: You're right there, Jaya, It's not very handsome, even for a woodlouse. Are fried insects sold as snacks in Malaysia?

The Owl Wood: I'm pretty sure they were woodlouse-sized woodlice that existed long before the dinosaurs, which would have stomped on them without mercy. Is there such a thing as a dinosaur-sized fossil?

The Woodfather angle is what makes its extinction such a puzzle - a really clever bug would manipulate all of the surrounding massive hairy spiders and other predators into eating out of the palm of its...legs? Feelers? I can just imagine a mob of prehistoric lizards controlled from the top by a woodlouse in a tailored prehistoric suit.

OH! Snap! Richard Gere's attorneys are preparing their injunction to shut this site down.

"...helped it escape from a big hairy spider" you wrote. This made me think of the 8 legs of love NSFW cartoon

I imagine Spiderman does the same thing Superman, or Bat Man, or Iron Man etc etc does. The Incredible Hulk, on the other hand, doesn't follow the conventions of polite society and probably just wets himself. They don't really get into it (sorta like the Bible doesn't talk about Jesus peeing ever). I don't know what Jack's been up to, but the last time I saw a pic of him, I think he could come live in the safari camp and blend in fairly well.

i understand obama gave mr gere and all A-list celebrities a few get out of jail free cards.

Hilarious about Richard Gere sounds like someone's hubby was a bit insecure huh?

Ms Ninja: Could a woodlouse, however intelligent, manipulate a spider? Some creatures are too single-minded to be seduced by argument.

Mr UB: Richard Gere's attorneys can kiss my hairy behind. I'm outside their jurisdiction.

Mark: I don't quite understand that cartoon. Did the spider fart?

Jimmy: Hmm, I'm beginning to suspect they wear nappies. Jack would be welcome at the camp. He's got more charm than Gere.

Billy: Can the President pardon someone for being a dick? I never thought he was that powerful.

Gossip girl: Maybe she should have slapped Gere's face to reassure him.

no GB. not every country in south east asia cook insects for snacks. it's only available in thailand and cambodia.
in malaysia, there is a type of sago worm which is popular among those in east malaysia. eaten cooked or alive. it's not found in the west peninsula.

Mmm, that worm sounds delicious! Can you put it in a salad?

Gere hasn't the exoskeleton to be a woodlouse. He's more of a slug.