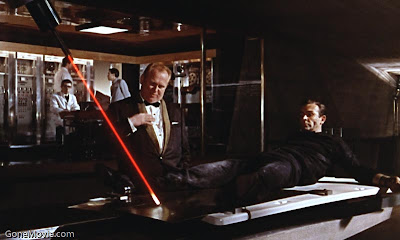 Scientists from two European universities have postulated that the human brain can’t get any cleverer without driving its owner nuts. Too much grey matter in the skull, they say, overloads the emotional circuits and produces a personality that veers between the obsessive and the diabolical. That’s why modern humans are no smarter, on average, than Fred Flintstone and Barney Rubble.

This theory clearly has grains of truth. All the super-villains James Bond had to deal with were fiendishly intelligent and mad as hatters. Take Goldfinger, for example. He had 007 just where he wanted him, shackled to a worktop with his legs apart and a laser beam closing in on his groin. Everyone thought Bond’s testicles were toast, but Goldfinger spared him at the last minute and revealed the details of his insidious master-plan. He then allowed Bond to connive with his dolly-birds and turn the tables on him, to the point where he got sucked out of his own aircraft. The fat git was plainly bonkers.

When I mentioned this scientific conjecture to the manager of the safari camp, he made the following sceptical observation:

“If it’s really true, how come clever races like the Chinese don’t have an unusually high proportion of evil geniuses?”

He had a point, but not an unanswerable one.

“Obviously, there are cultural factors at play,” I said. “The Chinese are into feng shui and yoga, which bring about a natural balance between the yin and yang. If you discipline your mind with these oriental techniques, it’s not so easy to go off your rocker.”

“I don’t believe in all that stuff,” he replied. “The Chinese have their own unique brand of madness. Just look at Bruce Lee in Enter the Dragon. You don’t make noises and faces like that if you’re sound of mind.”

This inspired me to do my own research on the Mad Chinaman syndrome. The first case that caught my eye involves a man who does headstands on a metal spike. His name is Li Xin and he’s a former kung fu master who evidently got bored of giving people flying kicks. He then spent years perfecting his new stunt, which created an abominable hole at the top of his skull. His behaviour seems amazingly barmy on the face of it, but then I noticed that each headstand only lasts for ten seconds. This suggests it’s a party trick rather than a lifestyle choice, and he’s probably quite normal when he’s not upside down. Could there be health benefits too? I wouldn’t rule it out.

Then I came across a young fellow called Peter Chao, who lives in Vancouver and posts video clips of himself on You Tube. Chao is clearly very angry about a lot of things, but is he technically insane? I don’t think the ranting alone is sufficient evidence. However, he does have a habit of taking his shirt off for no reason, revealing the most hairless chest I’ve ever seen on a male primate. If that isn’t a sign of lunacy, I don’t know what is. 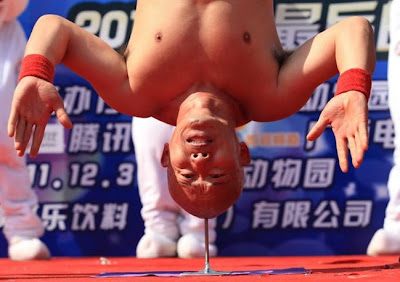 Comments:
"Scientists from two European universities have postulated that the human brain can’t get any cleverer without driving its owner nuts."

meet my partner and tell me something I don;t KNOW

Is Stephen Hawking clinically insane then? Rather sad given that his brain is the only part of him still working.

we humans have devised a method of dealing with all the extra grey matter, regular heavy doses of alcohol will keep curb the growth of grey matter.

Is a hairless chest considered attractive in China?

This picture is doing weird things to my brain. I'm not sure if it's the nail in his head or the hairy armpits but no hair on his chest.
xoRobyn

Bruce Lee...does have good moves , but never appeared to have an abundance of gray matter....
I think as far as measuring smarts with chest hair....age and sex must be considered....lol

The brain of the male continues to grow throughout life, as the grey matter is compressed it squeezes out through small holes in the skull, escaping via the ears and nose. On contact with the air it immediately dries and becomes hair-like. This is why pulling nostril "hairs" hurts so much - they are little strands of brain.

I have absolutely no explanation for my hairy arse.

John Gray: Dear me, that sounds like hell! I believe alcohol dulls the intelligence.

Steve: His voice sounds calm and rational, but who can guess what passions rage within?

Billy: That's certainly an effective cure, although it can have unhelpful side effects.

Runawaybride: It might well be in Japan - Sean Connery's hairy chest was remarked upon in You Only Live Twice. What kind of chest do you find attractive, Miss Runaway?

Robyn: Well spotted, Robyn! I never even noticed his chest was as hairless as Pete Chao's! It must be the norm in China.

Reality Jayne: Whenever you meet a clever man, you should ask him to take his shirt off. There's no point theorising without data.

The Owl Wood: That's a very dubious theory, Mr Owl, because brain cells feel no pain. You have a hairy arse because of your strong primate genes.

Judging by our local high street, those scientists may be absolutely wrong

Great – I can blame my high IQ for my OCD and my fiendish nature. ;)

I prefer a manly chest, and that means I like strong pectorals and lots of hair.

Since my past few relationships have been solely Chinese-Vietname or Japanese-Korean and there was never chest hair in the equation. They were smart and crazy though. So that blows the theory that it's only the other races!

That hole in Li Xin's head is quite disturbing. You'd think he has better things to do with his life. Anyway, that Peter Chao is quite funny...

Great. Now I'm going to be thinking about this all day instead of laughing at fart jokes. This post is going to make me smarter, and, then, where will I end up? Thanks a lot!

someday i would love to meet your safari camp manager, GB.
:)

Beth: Don't lose heart, Beth, there's bound to be a cure. Getting drunk, for example.

Runawaybride: I'm glad to hear that, Miss Runaway. We gorillas have plenty of both!

Angie: Do you have a thing for oriental men, Angie? I hear they're either good cooks or good masseurs.

Azra: It's a very disturbing hole, Miss Azra, although I suppose he could it as a socket for something. Peter Chao is great comic talent, check out his other You Tube videos.

Fred: If you don't want to think, just look at the pictures. They're meant to be a distraction to stop people from over-analysing.

Jaya: Really, Jaya? What's he got that I haven't? Apart from insights about the Chinese.

I do NOT want my brain driving my nuts!

he is almost in every post of yours. and I've never met a safari camp manager.

and i would love to meet you too :p

oh boy. this is awkward. though really, how are you supposed to know? you're a gorilla. but GB...we don't call them "chinamen" anymore. it's considered racist. i believe the politically correct term is "ching chow waaaaaaaaaa".

Driling a hole in one's skull is a time-honoured treatment for migraines and madness, GB. Admittedly most people don't try to do it themselves, but you have to admire his perseverance.

Al: Indeed not, your nuts should be driving your brain.

Jaya: Thank you, Jaya, perhaps the three of us will meet one day!

Kage: It's racist to call a man from China a Chinaman? That's news to me. Why haven't you complained about me using the word "dolly-bird"? How would you like it if I called you a dolly-bird?

Righteous Harlot: You're right there, Ms RH, I remember hearing of someone who tried that remedy. But I think the hole has to go all the way through the skull, which Mr Li's indentation has yet to achieve.

Very interesting. This was one of those brain teaser informative posts--ironic since we're talking about overloading brain power.

I always thought the villains in Bond movies had such huge egos that they lacked common sense. Have you noticed that, GB? That overly brilliant brains seem to lack common sense?