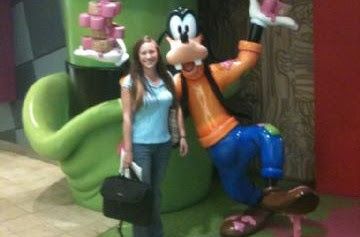 Our guests are complaining about the aggravations of air travel, with its tedious security screening and delays. News of an indignity suffered by a woman in Orlando Airport has added fuel to their grumbling. This hapless female was “randomly” selected for a pat-down search, it being pure coincidence that her bosom resembled a dead-heat in a Zeppelin race (see picture). She claims that the two male security guards who engaged in this impropriety had previously been ogling her chest. I find her story entirely credible and hope that the guilty men are tarred and feathered by a feminist lynch mob.

Big breasts are only a cause for suspicion when the passenger is a male transvestite who might be carrying contraband in his empty bra cups. Even in such cases, it should be possible to detect the subterfuge without squeezing the dubious extrusions. To cop a feel of a woman’s jahoobies on the pretext of a security check is the act of a villain. My friend Smacker Ramrod, the circus vet, said that he never even thought of touching a woman’s breasts until he had (a) bought her dinner, (b) told her she was beautiful, and (c) shown her the scar he got from being bitten by a horse he was examining. I should imagine that Smacker would have refused to give that woman a pat-down search if she had implored him to do so with moist eyes.

Now I don’t need to tell you that the upsurge in airport security has been prompted by the threat of suicide terrorism. Only last Christmas, a young hooligan from Nigeria attempted to bring down a jet by creating an explosion in his underpants. A consequence of this climate of fear is that airlines have become extremely wary of passengers doing anything out of the ordinary. On a recent internal flight in Russia, a 23-year-old man emerged naked from a toilet and skipped gaily down the aisle. Who knows why he did it. As a former circus ape, I have observed that humans sometimes indulge strange whims on the spur of the moment. Psychologists will no doubt find an explanation linked to abnormal activity in the frontal lobes of the brain.

Whatever the reason for his peculiar stunt, common sense should have told the cabin crew that he posed no threat. A naked man has limited options for concealing a deadly weapon on his person. No stick of dynamite was protruding from his rectum. Yet the flight attendants pounced on him while passengers cowered in fear, prompting the pilots to make an emergency landing in Vladivostok.

I am actually surprised that no entrepreneur has set up a nudist airline, whose passengers could be whisked swiftly through security without the usual hoo-hah. It would definitely be the safest form of air travel – I can’t imagine any member of Al Qaeda boarding a flight on which a woman might laugh at his knob or throw a tampon in his face. I must mention this idea to Sir Richard Branson, who in spite of his beard is no fan of bin Laden. He is allegedly rather partial to naked ladies, though. 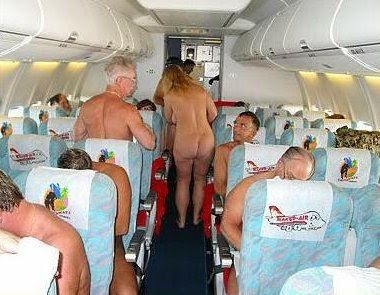 Comments:
It sounds as if the security guards had a lil too much jungle juice that day. Good thing the head pervert of the TSA will investigate Eliana's allegations.

I immediately thought of Branson when you suggested nude flying. He could charge three times the going rate for a ticket, too. And the safety benefits are another selling point. I'd bet this thought has crossed his mind.

If you type in your website address with your comment, my comment plug-in will fetch your last post title and display it with your comment. Of course, your name links right back to here, but go ahead and use the fetcher, too, if you want.

i wish the chinese would hurry up and invent star trek transporters. we have far too much junk floating around in our atmosphere.

Maybe Virgin airlines would do well to run with the nude flying idea. Then again, maybe not.

I'm opposed to the invasive screening, but I can't really blame the guys for thinking she might be storing something extra in there. It's not like the other charges, in which TSA had people remove their prosthetics.
xoRobyn

A woman's chest is always a good storage place for many things.

Static: Isn't there a 'Department of Homeland Security' that's supposed to look into such cases? The security of Ms Sutherland's homeland was undoubtedly breached in a very significant way.

Fred: Do you think he'd have the balls to travel on the airline himself? I don't think he'd dare without waxing first.

Billy: I wouldn't count on the Chinese to invent something useful like that. They are too obsessed with gambling, computers and internet hacking.

Robyn: The TSA are a rogue state. I would call in the Marines to deal with them. I hope you're taking precautions with your own ample bosom, Robyn. You can buy metallic bras on internet.

Jaya: Milk being the most important of them. But I don't think breast milk falls under the liquid ban.

Nursemyra: That's because you've never met a member of Al Qaeda, Nursie. You should keep a spare packet on you for such emergencies.

Nudity always seems like a good idea on paper. The few times I’ve experienced a culture of semi nudity however; beaches in Ibiza and coastal Spain, Costa Rica, the DR, and once while working as a toll collector for the PA Turnpike…. It never, ever works out. 97% of the people who are willing to get naked are people you do NOT want to see naked.

Nude airline? Interesting idea. But where the hell am I going to stash my passport, wallet and house keys?

Oh. Up there. Not sure they'll all fit.

Nude airlines, hmmmmmmmmm. Save being body searched I suppose.

Would you really want to put your bare twat on an airplane seat that someone else just vacated with their's? I'm no germophobe, but I think I'll pass on that.

lets bring back racial profiling and the world will be a safer place...

I thought there was already a nudist airline.. a quick Google produced:
this.

It might be a great way to get to the Swinger Cruise.

I definitely think you have a point there. Hopefully the airlines would provide Snuggies once the passengers were safely ensconced in their seats. Otherwise there woudl be too many pointy things waving around, that could be dangerous: take an eye out with those things.

One question Mr Bananas, where did you find this picture!?

Scott: Very true. Most of today's nudists are from the flower power generation of 1967. They should have taken the death of Timothy Leary in 1996 as their cue to put their clothes back on.

Steve: You could let them dangle from a string necklace. Dangling and nudity go together nicely.

Rubbish: No search apart from a quick rectal probe to make sure you're not smuggling drugs.

Bodaciousb: You'd surely be allowed to put your own twat-cloth on the seat. A washable man-made fibre might be appropriate.

Paige: Non-naked passengers should definitely be profiled. The innocent have no need of clothes.

Robert: That airline doesn't count because it's purely for domestic flights in Germany. The Germans will bring nudity into anything they can.

Ms CSR: I thought I was going to have to hire my own extras for the naked airline picture, but fortunately someone had already done it. I don't remember who it was, but I think it was for a good cause.

Oh GB, you always make me laugh. Thank you. Yes, I was thinking of my own extra "carry-on" too. I think I will boycott all airlines for a while, at least until the Marines take over. xo

Entertaining as usual, GB :-) Where did you get that picture, btw? It fits the theme perfectly .. :-)

HA! Where would a woman find a tampon, anyway? It's not like she'd have any pock-

Judging from the photo, it would be smart for this nudist airline to specialize Florida destinations.

About that picture with the Disney character and the big tittied girl. I think goofy has a bulge and he's thinking naughty thoughts about that girl.

Those pat downs are for people who enjoy being groped, poked and having their weiners stroked.

I'm not sure if it's such a good idea for people to be naked on a plane. What if you run into some heavy turbulence all of a sudden. Somebody getting up to go pee might fall into your lap with their asses sticking up in your face as you're trying to enjoy your itty bitty cup of wine.

Hahahhaa! Air Nude! Would if the plane looked like a flying naked person?

I understand that the TSA emerged as the result of an initiative to find jobs for sex offenders recently released from prison.

Just read through the comments, and found my question answered. Your skill in finding such a pic is to be applauded :-)

Eve: There are few things one can imagine which haven't been photographed, Eve. It's just a question of knowing which rocks to look under.

Bschooled: It might be difficult to throw a tampon with sufficient force. Someone should invent a tampon gun.

Kelly: Chamber pots would be allowed on a nudist airline, so passengers wouldn't have to run when they need to go pee-pee. Any groping, poking or stroking could be done in-flight by the cabin crew.

Dr Ken: You've made me wonder whether naked men or naked women are more aerodynamic. I think both designs have their strengths and weaknesses.

Kyknoord: Better to give them jobs on a dairy farm. At least the cows are used to it.

Given the number of times I've had hot coffee poured into my lap on planes, I think I'd miss the insulating properties of trousers.

That said, it would speed up the whole business of fantising about what the stewardess looked like naked.

The naked man plane has a great landing gear. Ouch. That hurts on the pavement.

I think there is a future for nudist airlines.

and provide the women

because safe is sexy.

Jon: Is going without coffee a price worth paying to see the stewardess naked? It's a question that goes to the heart of what it means to be a man.

"Prepare for a knocker landing!!"