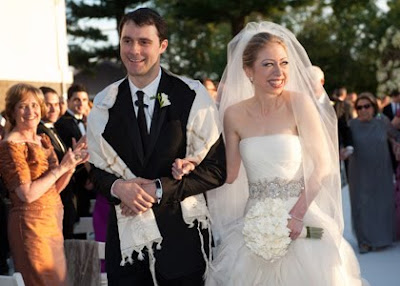 I overheard the tourists at the safari guesthouse discussing whether the Clintons had snubbed president Obama by not inviting him to Chelsea’s wedding. It was a topic on which I could not hold my peace:

“Not getting an invitation was the best piece of luck he’s had since the Republican phone sex scandal!” I exclaimed. “If he’d gone to the wedding, protocol would have required him to give a speech praising Chelsea. Flattering a girl he’s never given a second look would have made him look like a chicken-greaser!”

“I dunno,” said one of the guests. “Lying convincingly shouldn’t be so difficult for a politician.”

He had a point. I later pondered the words that Barry might have chosen for the occasion. Perhaps he would have said something like this:

When I saw Chelsea at the Democratic National Convention in 2004, I thought: “Man, that white chick’s got a great ass!” If I hadn’t been married to my lovely wife Michelle, I would have definitely asked Chelsea to be my date at The Detroit Gospel Choir’s Annual Karaoke Dinner.

A touching tribute like that would have surely transformed Chelsea into the perfect blushing bride. But it might not have impressed the guests all that much. They would have known that a woman always gets compliments on her wedding day, no matter how frumpy or boney-assed she is. Barry is pretty good at sounding sincere, but even his majestic oratory has its limits.

He could have given another type of speech, of course – one harking back to all the fond memories he had of Chelsea since she was a tiny tot:

When Bill Clinton was running for governor of Arkansas in 1982, I was privileged to be a junior staffer on his campaign team. One of my most important jobs was baby-sitting little Chelsea when her mom and dad were on the campaign trail. Now people: I can tell you her poop smelt just as bad as the possum shit I accidentally trod on when stuffing “Vote for Bill” flyers into mail boxes. But when she started hollering I said: “You wait ‘til your folks get home, Missy, changing your diapers is a task way above my pay grade!”

This sort of reminiscence would certainly go down well with wedding guests. The one allegation that humans will always believe is that someone else’s shit smells bad. If I announced that Queen Rania of Jordan produced turds that smelt of buffalo crap, people would assume I’d worked as a lavatory cleaner at the Royal Palace in Amman.

The downside of delivering such an anecdote is the risk of alienating the president’s core constituencies, who might think that smelling the poop of a white baby had taken him into Uncle Tom territory. Hilldog might then have to reciprocate by saying she’d smelled the poop of the president’s daughters, a confession which would make her surly and irritable. Much muttering and scowling would occur in the corridors of power.

So all things considered, I think the Clintons did the president a favour by not inviting him to their daughter’s wedding. But they should have invited Monica Lewinsky – leaving her off the guest list was just petty. 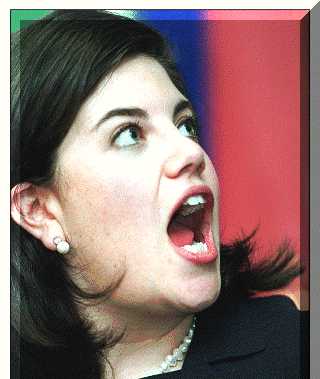 Comments:
At first I was confused, because I didn't know who this Barry person was, but I get it now.

I don't know about Barry, but
I'd like to have been invited to Chelsea's wedding.
A vanilla cake, filled with dark chocolate mousse, frosted in white fondant??
Come to mama!
I don't even care that it was gluten-free.

Who is Barry? Like Barry Gibb from the Bee Gees. Huh who knew. Aww, chelsea is sweet. Compared to the Bush girls she may have a better head on her shoulders...

Yep, not inviting Monica was pretty petty on Hillary's part.She could have given Chelsea some advice on how to please her new hubby orally.

Monica definitely should've been there, passing out cigars. I like it.
xoRobyn

Obama not invited? Is it like Uncle Tom may be good enough to become president, but not good enough for a classy social function? I sure hope not.
Anyway, hilarious post.

Donut girl: Monica does look cute, doesn't she? Ready to have a piece of cake in her mouth. Or something...

Ms Wannabe: Chelsea is a credit to her family, although I'd like her better with a smaller mouth and a bigger bottom.

Rubbish: I wonder if Monica still has the old magic. She could have given Chelsea her kneepads as a wedding present.

Robin: Would anyone smoke a cigar given to them by Monica? Think of its value as a souvenir.

Kyknoord: It's a bitter pill for Monica to swallow.

Doctor: Maybe they have a grudge against him for refusing to change Chelsea's nappies.

OH SNAP! About Monica. And I particularly enjoyed Obamas first speech about Chelsea. It is true about having to say nice things about the bride no matter how frumpy or bony-assed she is however. You are funny!

The traumas of organising a wedding, there's always going to be someone with a snit on.

Anyway, I suspect the real reason he wasnt invited was that there just wasn't a top table big enough to accommodate any more egos...

GB, you are truly the King of the Jungle!

that's the most charming picture I've ever seen of Monica - first time I understand what Bill saw in her!

Can you imagine her taking part in the traditional garter toss?

I have to agree - that picture of Monica is truly seductive. "Come hither," it says, "come hither and let me have a bit of that bun"

What a shame Monica was not invited to the wedding. What a good picture of her showing her abilities to the audience.

I'll bet Monica has really packed it on since her brief flirt with fame. I guess the tabloids won't pay anything of substance for a picture of her. Who'd of guessed. Right.

Monica is in negotiations to front the Welsh Food Board's new cake-based anti-anorexia campaign. We're going to auction places in the audience for the shoot of her eating a custard slice.

Nursemyra: Glad to have entertained you, Nursie.

Jules: Hello and welcome, Jules. Do you think Mr Obama has ever made a complimentary comment about a woman's tush?

Joanna: Weddings are such a hassle, Joanna. The things men do to please women.

Madam: Thank you, my dear Madam, I shall make you my royal masseuse.

Debbie: I always thought she was pretty, Deb. And just the kind of girl who would have grabbed the garter.

Jon: She was surely a woman of appetites. Do you think she'd wolf the cake down quickly or let it luxuriate in her mouth for a while?

Leni: Yes indeed, Leni, she is very good at pretending to be surprised.

Robert: There are a few current pictures of her and you're not wrong. That's why I chose one from her period of fame.

Mr Boyo: She's been eating comfort food for the last decade, Boyo. I'm sure you Welsh will think of a few vegetables to complement the custard slice.

LOL !!! Monica is her ever ready pose.