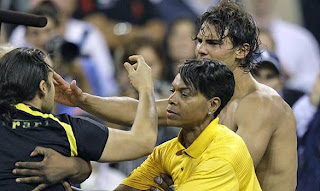 Rafael Nadal has forgiven the man who kissed him in front of 10,000 spectators at the US Open.

“He was really nice and said ‘I love you’,” explained Nadal.

I wouldn’t have fallen for that kind of sweet talk. One thing I learned in the circus is that fans are never satisfied. If you let them kiss you, they expect you to go to their tea parties and eat their fairy cakes. They are also incredibly jealous of each other. If one of them steals a kiss, they all expect to have smooching rights. That’s why I treated my fans firmly but fairly – like a strict schoolmaster. The only kissing allowed was when I kissed the hand of a female admirer, purely to demonstrate the chivalrous nature of the male gorilla.

It seems to me that tennis is not really a kissy sport. Let’s suppose you feel like kissing someone after winning a point. The umpire is out of reach and your opponent probably isn’t in the mood for it. Kissing a line judge after getting a decision in your favour would make sense, but it's the sort of behaviour that might incite the crowd. Kissing a ball boy would be an arrestable offence under any jurisdiction.

The manager of the safari camp said he’d like to see more kissing in the ladies’ game. He suggested that Serena Williams should plant a big wet one on the mouth of her vanquished opponent (unless this opponent were Venus, when the kiss would be incestuous).

“I’d love to see her treat one of those cute European blondes like her punk bitch,” he declared.

I’m not sure what he meant by that, but it sounds like unseemly behaviour for a grand slam champion. I hope that Serena continues to offer a ladylike handshake, perhaps followed by a friendly pat on the bottom if she knows her opponent well. An illustrious sportswoman should set a good example for the budding stars of tomorrow. Martina Navratilova and Billy-Jean King were not just admired for their penetrative forehands.

I’ve been kissed against my will on a couple of occasions. The first assailant was a circus clown. I didn’t punish him for his effrontery because he was highly emotional and only kissed my feet. I was relaxing in a deck chair, reading back issues of Cosmopolitan, when he crawled up to my toes.

“Thank you so much for curing my constipation, GB!” he bleated pathetically between kisses. “I’ve been shitting like a camel since you swung me by my ankles.”

I resisted the temptation to kick his head like a football. “Don’t mention it,” I replied. “When you have finished kissing my feet, wash them thoroughly with a pail of soapy water and a sponge.

After satisfying his peculiar urge, he did as instructed.

The other time I got kissed was when a female gorilla reacted to one of my witty ripostes by putting her mouth over my ear hole. It wasn’t technically a kiss because she blew rather than sucked, but it certainly made me feel giddy. I let her off with a stern rebuke after my head had cleared.

I’m glad to say that I’ve never been forcibly kissed on the lips, which is an indignity that no warm-blooded creature should have to endure. The practice was only ever acceptable in those old Technicolor Hollywood movies, when the bad guy would force his mouth on the lips of the sassy heroine and laugh wickedly afterwards. I have to admit I always loved those scenes. Does that make me bad? 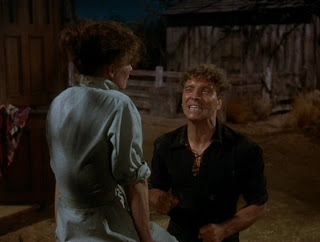 Comments:
Yes, yes it does make you bad.

Back issues of Cosmopolitan? Hahaha. Learn anything, GB?

I love those scenes. But today is not a day to think about it. No.

I can't see Serena kissing a line judge, unless it was an attempt to retrieve the tennis ball she'd shoved down her throat in an attempt to kill her....

i looked for your fuzzy face while wandering around londontown...but alas, only the people variety. boo.

if i HAD seen your fuzzy face, would i have forced a kiss upon it? probably not as i do not enjoy a mouth full of fur.

do with that what you will.

It's not so much the mouth forcing that bothers me, so much as the impassioned squeeze on the chest. My chest is not for random squeezing by strangers.

What about those female tennis streakers? They always make me smile and the players really don't seem to mind the interruption.

Poor female gorilla. She tried to seduce you and you just blew her off. Wasn't she cute enough for you?

I hate it when gorillas blow in my ear

Vegetable Assassin: Well maybe you've never been kissed properly, baby. Just kidding! It is indeed disgusting unless you're doing it to a mango.

Ms OWO: I've learned many things from Cosmo - like what women are supposed to like in bed. Not much use to me, but it's interesting.

Red Squirrel: It's a pity Serena lost her temper like that. It spoils her dainty, feminine image.

Kara: You need to work on your technique for arranging chance meetings, Missy. I tried to give you a hint. Next time I'll send out a search party.

Madame Defarge: I am outraged that anyone would dare to manhandle your august chesticles, Madame D. I shall buy you a t-shirt with the words "These oranges are not for squeezing" on them.

Donut girl: I've got to watch more tennis matches - a female streaker would bring a smile to my face as well. Getting you ear hoovered doesn't put you in the mood, Ms Donut. When female gorillas blow, they blow hard.

Nursemyra: I'd do it very gently to you, Nursie.

And remember, one kiss eventually leads to buttsecks.

I like to laugh wickedly after kissing a damsel. If I'm feeling particularly fruity I'll twirl my moustache and swish my cape as well.

I'd be happy to see Serena Williams Williams kissing anybody or anything. I'd be happy just to watch her polish her tennis racket, drink a glass of Robertson's Lemon Barley Water or perhaps go shopping for some new sweat bands. Even Martina Navratilova and Billy-Jean King - and their penetrative forehands ;-) - wouldn't wrest my attention away from my one true love.

If Martina and Billie-Jean could have had the pleasure of playing each other...it was likely that there would have been more than a "lady handshake" that would have transpired. Tongues are always involved between Butches after a Match, so I've been told.

If I could play Serena, I would bite down on that meaty Ass of hers. I'd be willing to take a Racket Beating afterwards. It would be worth it, I'm sure.

Bring on your bad self, GB..Cow wants to reform you! :)

Sassy Girl: Prudish? Me? Come to one of our wild jungle parties before calling me that.

Static: A kiss only inevitably leads to butt sex if you're a baboon. Never kiss a baboon unless you're willing to take it up the keister.

The Jules: I see you're a disciple of the late Terry-Thomas, the master of caddish mannerisms.

Gadjo: She's an attractive woman if you like 'em butch (which I do), but I'm not too fond of her latest hairstyle. It makes her look frumpy.

Sabrina: I'd kiss your hand to begin with, Saby. We'd discuss how to take it further in my tree house.

Blase: I'm glad you're man enough to admit that Serena could racket-whip you if she wanted. You sound as if you're asking to become her punk bitch.

Topiary: I'll come to your reform school with an exercise book and biro, Ms Cow. I'm sure you'll teach me many things.

Hm... never forget that Rafa was born in a country where people kiss a lot, so he's used to this. Ask your Spanish colleagues at the Madrid zoo, they will confirm this.

And YES, Mr Bananas, that makes you real bad because your naughty self would enjoy to be the bad guy in the Hollywood Technicolor movie!

I also prefer to be bad. It's more fun to be bad than it is to be good. You surely know that, don't you? ;)

My favorite part of those scenes is when the asshole gets a face full of fist afterward... Does that make me bad?

“I’ve been shitting like a camel since you swung me by my ankles.”

That made me laugh really, really hard. Your gorilla antics make my day.

I think I'd rather kiss Nadal than Serena?

Gorilla, you KNOW you are very, very bad. You need to be punished! Is there an S&M scene in the gorilla world?

I'll never understand where Serena's centre of gravity is.

How come I didn't see you at the US Open? Were you not allowed out? I'm sure Nadal would have appreciated your support?

Leni: I've never thought of myself as a bad ape, Leni, but I suppose that's for others to judge. I'm more of a teaser than a forcible kisser.

Auri: He does indeed get punched, Auri, but it's usually the clean-cut hero who delivers the blow, not the heroine. Them were olden times.

Sally: I made your day? Boy, that makes my chest feel warm and fuzzy!

Rubbish: Nadal is a good-looking fellow, but I bet Serena's more of a tiger in the sack.

Ms NOIP: There's no need for S&M parties in our world, it's already part of our daily lives. I'll let you spank me if I can spank you first.

Lady Daphne: I think it might be where her thighs meet.

Lola: I'm more of a Wimbledon ape, Ms Likely. I watch the US Open on satellite TV.

have you ever played tennis at all? Perhaps you would kiss someone in the crowd such as Cliff Richard - who I have read is an avid homosexual...

We Welsh don't go in for kissing in the sports arena. On the rugby field we content ourselves with cupping one another's sacs for 90 minutes then discuss it all in a nice communal bath.

You can tell we're the Sons of the Romans.

I used to get forcibly kissed every New Year's Eve by as many fat, sweaty oafs as could shake my husband by the hand and manage to grab me. Ugh!

I can understand the man being overcome with desire for Rafa. He really is quite beautiful and so energetic and passionate.

Mutley: That is a shocking allegation to make about Sir Cliff, Mutley. What about Sue Barker?

Jonas: Many thanks, you are most welcome.

Mr Boyo: Well cupping is quite civilised, it's the squeezing you've got to be worried about in the scrum. Do Welshman oil and scrape each other?

Emerson: I bet you liked Martina. She had a footballer's thighs.

Joanna: How awful, Joanna, I hope you kept your mouth closed! Are you suggesting it was a homosexual thing with Rafa? The thought had never occurred to me.

You forgot the other movie archetype - when the man kisses the hysterical girl on the lips and she calms down, melting in his arms. I have not tried to do that myself, but I imagine that would just make the woman more wild, and not in the good way.