The Bird and the Bard

News arrives of a pelican who has fallen in love with a woman. Well they’re not the smartest creatures, are they? Apparently, this one likes to suck the woman’s hair and play with her shoelaces. “Right idea, wrong areas of the body” would be the kindest comment on those attempts at foreplay. You have to feel sorry for the pelican, really, because the love disease is devastating enough for the most level-headed beings, let alone a bird-brained squawker with a bag under its beak.

Do gorillas fall in love? Not really. Pre-pubescent gorillas sometimes get crushes, although it’s usually the object of their affection that gets crushed. I remember an orphaned female gorilla who attached herself to a visiting American footballer in the safari camp. She had a wonderful time with this man, crumpling him with shoulder charges, wrestling him to the ground, and twisting his arms behind his back. The sturdy athlete bore everything in good spirit, never flinching from her caresses or asking her to go easy on him. I heard that he later spent most of the pre-season period on crutches.

It is said that the foremost expert on the human heart was Sir William Shakespeare. (He wasn’t really a knight, but it doesn’t feel right to speak his name without a title.) Sir William’s insight about love was the fickleness of the whole thing. The moral of A Midsummer Night’s Dream is that when Cupid’s arrow strikes you can fall for anyone – your best friend’s fiancé, a fairy, or even a jackass. It’s a fair point, but there’s one thing about the Bard’s lovelorn characters that doesn’t quite ring true: they are constantly talking. I’ve seen enough of humans in love to know that their condition makes them dopey and inarticulate. Yet Shakespearian lovers can’t stop whining about their heartache to anyone who’ll listen. In fact, they keep on chattering about it even when they’re alone.

The most convincing portrayal of human lovesickness is in a film called The Name of the Rose. Christian Slater is an apprentice monk who falls for a stunningly sensual beggar girl played by Valentina Vargas. He has no idea what to do about it, but it doesn’t matter because she takes charge of the situation, pulling off the lad’s habit and literally engulfing him in her yearning flesh. Little Christian’s boyish bottom is exposed to the world, while Valentina mews like a cat being simultaneously stroked by eleven pairs of hands. And throughout their brief encounter, they never exchange a single word. Inevitably, it all comes to grief when a bearded troll from the Inquisition arrives at the monastery, charging around the place making reckless accusations and flashing his deadly instruments. The tragic ending is a familiar denouement in human love stories, although in this one the parted lovers do at least escape with their lives.

The most important lesson of Sir William’s play is that being in love with someone is actually quite different from loving that person. Although Titania was temporarily besotted with Bottom, no one would suppose that she actually loved that buffoon – it’s just that the area of her brain associated with adoration had been stimulated at the wrong moment. The fairy queen was cured of her infatuation by magic, but real humans are rarely so lucky. I would guess the most effective remedy for the love affliction is to engage the idol of one’s heart in commonplace conversation about the weather, the neighbours and the price of fish. Few humans can speak for twenty minutes without saying something daft or banal, and it never fails to break to spell. 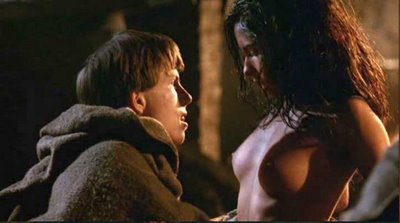 Comments:
Ah yes, I remember that bit in The Name of the Rose very well. Another formative teenage experience - you do seem to writing for men of a certain age at the moment GB.

I was going to say something about love until I saw the picture. That girl was the sexiest thing in the universe and I couldn't stop thinking about her for weeks after I saw the film. I would have willingly re-acquired my virginity to lose it to her.

Bit grubby for my tastes, tho' I dare say she would've cleaned up well. Christian Slater now - he was squeaky clean. No skimping on his trailer, obviously. Either that or he and Mr Connery were scrubbing each others' backs, so to speak...

What do you do if you fall in love with your fishmonger?

My daughter agrees with you re: Shakespeare. She informed me that she had a heated argument with a classmate in her freshman English class about whether Romeo and Juliet's problems were caused by "true love" or merely "stupidity."

She was on the "stupidity" side.

I like the idea of mediaeval love - all that soft fur and animal hide bedding to sink back into, the rough hessian of a monk's habit, the smell of the dark, damp earth, the taste of your eager monk-lover...

Of course a couple of weeks of that and you'd be begging for a hot shower and some central heating . And then there'd be the fear of burning in hell eternally for corrupting a novice (although Christian Slater didn't look all that novice to me).

I've quite forgotten what I was going to do this afternoon.

Damn you, Nanas, for your blithely thought-hopping posts! Damn you, and also thank-you.

Sam, according to wikipedia:

The film has a controversial scene in which Christian Slater, as Adso, has an explicit sexual encounter with a peasant girl played by Valentina Vargas. We cannot be sure whether Slater was 15 or 16 years old when this scene was filmed, but he once claimed that he lost his virginity in this scene, although some have raised doubts that he and Vargas actually had sex.

".while Valentina mews like a cat being simultaneously stroked by eleven pairs of hands."

GB, the mind boggles. A sublime post, which I have had to share with colleages as I was laughing so hard.

I am a great fan of Cadfael and have most series on DVD. I can't remember this particular episode. I wonder if you might be so good as to point me in the right direction, if only to complete the set.

In Eco's book, the poor beggar girl is burnt alive and while the young coward watches her entrails spill out, the older monk, brother Sherlock or whatever his name was, points out to him how under the skin we are all corruption and gore, (metaphorically and literally) which was a bit heavy handed on Umberto's part I thought, (literarily and literally.

She gets saved in the film and the young monk incredibly turns his back on her for the monastic life! Not even a kiss for the road while Connery is looking the other way.

Your are truly insightful.

Glad you enjoyed it, SexyB. I'd recommend the movie if you haven't seen it, because there's a lot more to it than Valentina mewing. Dr Maroon has surely seen it in spite of his balderdash about Cadfael.

Thanks Kieran, although don't expect too much from my insights. They might be sound, but they might also be bogus. One can never be certain about these things.

Wrong areas of the body?

Don't knock it till you've tried it, pal.