They spiced up our lives 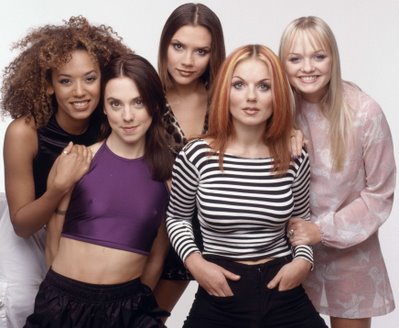 I heard a rumour that the Spice Girls were planning a reunion, but sadly it was untrue. One of the drawbacks of living in the jungle is that all kinds of spurious stories get spread via the bush telegraph. Your hopes get raised by exciting news only to be dashed shortly afterwards.

The Spice Girls were not only beautiful, Siren-like singers, but notable philosophers as well. In their first chart-topper, they gave their suitors the following frank advice:

If you wanna be my lover, you have got to give,
Taking is too easy, but that's the way it is.

A few boorish men said they’d happily give them what they needed, but the meaning of the lyrics was perfectly clear to any creature without gills. Life is about give and take, and if you want a woman to oblige you between the sheets, you’ve got to tickle her fancy with chocolates, flowers and honeyed words.

It was a major breakthrough in human courtship for a woman to tell a man quite openly what he had to do to get her into bed. Women used to be reluctant to give out this information for fear of being tricked by a wily seducer, but the Spice Girls took a more liberal view. They realised that men who use deception to get sex are only deceiving themselves in the final analysis.

All good things come to an end, and the girls eventually parted company to blossom in fields anew. Ginger Spice was the first to shine as a UN “goodwill ambassador”, tirelessly campaigning for universal sex education. Her point was that too many human adolescents were at it like rabbits without even bothering to read the manuals first.

“I remember the massive pressure to lose one's virginity,” said Ginger, reflecting on her maidenhood – “everyone else seemed to have done it.”

Listening to a teacher talk about sex might well take the edge off a teenager’s lust, but the problem of peer group pressure needs a more imaginative solution. Perhaps any girl who is a virgin on her 19th birthday should earn the right to be deflowered by Hugh Grant, the English film star and dandy. It’s about time that Hugh did his bit for the morals of the community.

Posh Spice has stayed in the limelight as a result of her marriage to Mr Becks, a famous footballer. One has to admire how the couple have confounded the gutter press by stubbornly refusing to divorce. Thus far, Posh has answered any allegation that her marriage is on the rocks by giving birth to another son, which is the kind of bloody-minded defiance that won the Battle of Britain.

I remember watching a documentary about her a few years ago. She struck me as a remarkably cheerful young woman, although I must say that she didn’t seem very posh. It’s been a while since I was in England, so maybe the standards of elocution have slipped a little. The other delightful aspect of her character was her honesty. She nonchalantly admitted to never having read a book (including her own autobiography) and casually disclosed that Mr Becks often relaxed in her underwear.

A lot of wives would be terrified to see their husbands wearing their knickers, but the practice is apparently quite normal among human males. Men, unlike women, cannot appreciate the qualities of their own bodies, so they sometimes like to imagine they are sexy ladies. Putting on a pair of panties helps them do this.

You're going to have to explain that one to me, GB. As a married man I'd really like to believe it.

There were five of them? Could've sworn it was four...

What happened to the other three - did Ginger eat them?

The Official Daughter has a poster of Mr. Becks on her wall along with other European Soccer Stars. I cannot wait to tell her he wears women's underwear.

You keep doing it Mr Gorilla Bananas.
You should be on the National Curriculum [sp].
I've been trying not to comment to give you a rest but I can't help myself.

Glad you liked it, Dr Maroon. Foot Eater and Kieran deserve to be horse-whipped for using coarse language in the presence of these fine young ladies, but Tarzan has posed a serious question.

I'm not going to give you the answer, Tarzan old pal. Think about it deeply: it will make you a better husband and father.

Even at the height of their fame (Spice World grossed $75 million globally) I was never that into them, unless they were on a magazine cover in a dentist's office and I had a spare 15 minutes before the appointment. I've heard about the skinny chick who blames her weight on polycystic ovary syndrome married an idot footballer. The one that hangs around with gay people gave birth to a child and branded it with the unfortunate name of Bluebell Madonna. But aside from those two I can't for the life of me remeber the rest of the band. Guys like Ivan the Terrible can't even remember how many they were in the band (I do. There were five. I only remember because I have a copy of a severely used magazine I found at a dentist's office one day) Do they really need the others for a Reunion Tour? Will anyone notice?

You're too cynical, Fatman. You need to savour the good times and thank them for the memories. No one likes a vulture whose always pecking at corpses.

Splendid blog, sir. Though I feel strange referring to an animal as sir. However, since you are obviously rather articulate, you deserve the title. I imagine you to dress in a tuxedo on occasion. Do you?

Thank you, Mr Kav. The answer to your question is: not since I have returned to the jungle. In the circus I wore all kinds of garments, but only in the cause of entertainment.