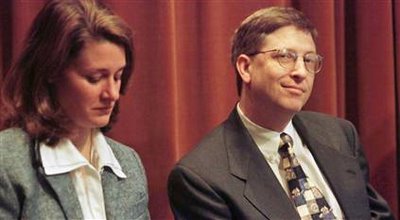 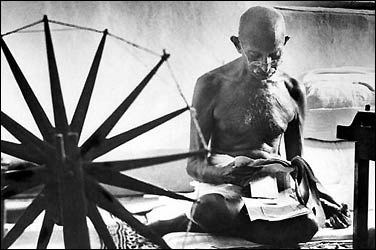 Comments:
"I once shared my bed with no fewer than three female acrobats after a flasher had accosted them during a night out on the town."

A guy once told me this was his favourite seduction technique. He said if you could sleep with a girl once without trying to have sex with her, she'd be so impressed that the next time she'd be all over you. I think he was a bullshitter.

Can't say that a visit from the ghost of Gandhi does much for me, GB. A film featuring the ghost of Gates, on the other hand, now that's entertainment. For a start, he'd have to be dead. Awesome...

Still and all it's refreshing to hear someone say something charitable about Gates. With Ghandi I always felt he was having a secret laugh.
Tarzan: he may be a bull------r but he knows of which he speaks.

Wow, in that first photo Gandhi looks completely different than in the film.

How come the women aren't all over me then?

Considering all his dosh, you would think old Gatesy would get a proper tailor. That shirt collar's too tight and his ghastly tie is choking him. You can even see it through the collar.
Really.

You mean it actually works, Pi? Bloody Hell. Why do I always find out about these things when it's too late?

U sound like an Indian gorilla - well are u?

No Miss Chimp, but I have a few Indian friends. I wrote about one of them here.

They say that back in his swinging days one could enjoy a fortnight of contortionist sex with Mahatma "M.Diddy" Gandhi. His press secretary vehemently denied this. The press secretary also mentioned law suits so we'll move right along. (Freaky love making aside) When we think of Gandhi we usually think of a determined Indian fellow who drank his own urine and avoided McDonald's. Or at least that's what I got from some video they forced us to watch back in high school. We forget about the party animal that Gandhi chained within his soul for the good of his country. I think the personal sacrifices he made for the good of the world is an aphrodisiac in its own right. The fact that Gandhi wasn't in the least bit interested in horny chicks just makes him sexier. Well....sexier than Bill Gates anyway. Calvin Klein need to put out a cologne to make people smell like Gandhi. Minus the flatulence.

The thing about Gandhi, Fatman, was that he sowed his wild oats early - when he was a child, in fact. By the time he got into middle age he was only interested in looking, not doing.

But I think the women who had sex with him would say they were attempting to have sex with his brain. What they'd mean is that they wanted a mind-fuck. So to speak. Not kidding. A man's mind is of paramount importance to many women when it comes to attraction. How else do you explain wanting to bed Martin Clunes? Or Stephen Fry who doesn't even like girls that way?

Sex is all in the mind anyway, isn't it?

And he did have a certain taut yet supple wiriness to him, making him look athletic and pretty "capable".
How tall was he?

Welcome back, Sam. The official story is there was no sex, just sleeping together in the nude.