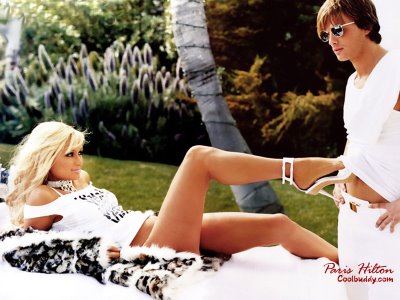 Comments:
You've got a great blog. Hopefully, it'll someday be a book. Is that where it's heading?

A good plan but she can't read and even if she could that weird eyelid she has keeps blocking out the words.

Being a prick teaser is worse than being a harlot? You've obviously never had your prick teased, GB.

Aww..I like Paris..she seems overly indulged..but sweet.
And I've always found that once you give up the love muffin, guys will be extremely clingy and annoying

And your eyes are quite attractive for a japing ape.
Is it true what they say about gorillas?
and what is japing?
( i cant be arsed to look it up )

'Japing' means 'jesting' Cynnie and don't believe what they say about gorillas.

'Daily ususual', the answer is 'yes'. It's not much fun reading stuff off a computer screen.

Please, we beg you, do not encourage Paris Hilton to breed!

What about Prince Harry? He plays polo and sounds just her cup of tea.

Good idea, Milady. His father might try to scupper it, of course, but who is he to complain?

It may be easier, but it's much less fun. How do you know this anyway GB?

I agree that Paris Hilton is largely misunderstood. She is being painted as a bad girl by the media for marketing purposes. Paris, though, is laughing all the way to the BANK! I'd love to date her and find out what she's really like. She seems to have a loving and loyal family, which usually indicates she'd be likewise.

I do remember reading quite a few Barbara Cartlands in my time and I believe Miss Hilton can definitely star in a film version of "Punishment of a Vixen."