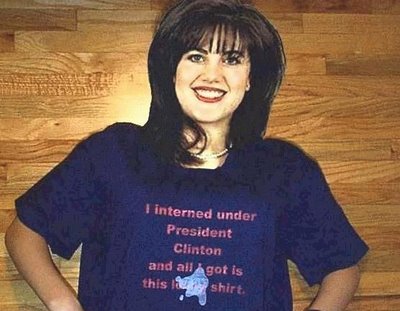 Comments:
Of all the gorilla beringei I've come across you are by far the wisest. Have you ever considered becoming an avuncular pongidae pastor?

Great quote, GB. You have an uncanny ear for dialogue, and for West Coast JAP slang! It breathes authenticity!

Can't fault your main premise, either. What fun that would've been. Especially in '08. "Hey Hillary - where's [insert name here]?" Some charity organisation was handing out white ribbons at an event Hillary was due at, so by the time she arrived all she could see was a mass of women with white marks over their left breasts. She turned tail and ran. Maybe it's a sore point still with her, do you think?

Always better for a girl to have a bit of tangible evidence! Shame she didn't have a wise advisor like your goodself, GB - she might have had a good looking little Clintonite. That would have been one up on Hilary!

Kieran, that's more or less what I was in my circus days. Have a look at the New Year's Day post if you don't believe me.

Tarzan, I believe the Hickory is an American hardwood.

Ivan, Hillary could have turned it to her advantage by offering to be a loving stepmom, but somehow I don't think she would have.

Shebah, the Clinton cub would have been 9 this year! How time flies!

In North America hickory wood is often used to smoke sausages. The process is dirty but the result is delicious, I'm told.

A pregnant Monica would have gone the same way as Marilyn. And Diana. If you ask me she got off lightly, just losing her job. Ever wondered why nobody's heard anything from her since that business? She's hiding out somewhere with Diana's bodyguard, they won't talk - EVER. They can't.

Sorry I've been rather silent myself GB, couldn't access anything post Paris Hilton, usual problem. PI has now solved it - you just hit "refresh" or "reload" depending on what system you have, and it all comes bouncing back! Huzzah! I missed you, Fluffy.

I miss Monica's absent child. Just imagine it making rude faces at the paparazzi. I like human children.

Yes, but could you eat a whole one?

The best blog post title since your own The joy of shitting.

Thanks Footie, you've always been partial to a good pun.

Not without getting sick, Ms Sparrow.

Redcoats in the village
There's fighting in the streets
The Indians and the
mountain men, well
They are talking when they meet
The king has said he's gonna put a tax on tea
And that's the reason you all Americans drink coffee

Yes! If you have any technical problems just come to me.

Ah...but Monica is now back in the news. The Republicans love her!

Jesus, it was sad. That she was dumb enough to talk to L. Tripp about it still blows my mind. I'm glad Clinton didn't screw her, and even worse yet, have issue!

I didn't think it was such a big deal, but his enemies sure loved it.

monica, did you send papadizi a love letter? because he said you did. http://www.youtube.com/watch?v=aYfySR6sEug