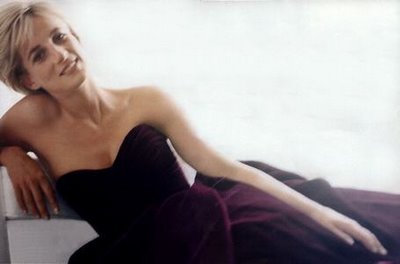 Comments:
The wife and I were in Barbados having breakfast when we heard about Diana's death. We listened to the radio for a few minutes in respect, but the ocean was just as blue afterwards.

"Sweet darling Diana! Our chicken! Our baby! Our star!"

Replace 'Diana' with 'Caligula' and that's a verbatim quote from I Claudius (the novel). You never did explain your fascination with the Romans, Bananas.

Are you sure that there wasn't a tiny touch of sorrow for opportunities lost mixed up in there somewhere, GB? After all, after Dodi, a fine male silverback like yourself would've been a vast improvement.

If only she'd been in Dorchester that fatal evening. You might have saved her. She would have melted in your heroic arms, and nature would have taken its course in a night of magical enchantment. Then you would've passed the silly cow on to the clowns for a roasting, of course. It's not like she was relationship material...

"maybe the milk of the last feed was unpleasantly sour; maybe the midwife had cuffed it during a postnatal visit."

Indeed, Mr. Nanas, indeed. And maybe the baby senses something of the heartbreak of life, maybe it has unwittingly, cooingly tapped the seam telling of the essential tragedy of existence. Maybe that is why the children weep so.

In our house it's who gets the purple bowl for breakfast.

Fuck. My comment about Doris Day was misplaced by a month and about the wrong woman.

Don't let that stop you, Beardie.

Sam, if you hold a human baby on your lap with its legs crossed it looks like a little Buddha. I don't think it's a coincidence.

Once again Mr Gorilla Bananas you prove my point. You are the Best of Bloggers.

New evidence has emerged that Diana's last words to Dodi were: 'Jesus, I'm knackered. I can't wait for my head to hit that pillar.'

I've told that one before on one of these blogs but I like it, anyway.

Mynah, my dear bird, well spotted! It was my way of paying homage to Robert Graves, although he got the "chicken, baby, star" epithets from Suetonius, as I'm sure you know.

Now I feel like an oik. Off to look up what it is you're talking about with your chickens, your babies, your stars and your Suetonius.

It sounds like a Campbell's soup recipe to me. Apart from the babies. Not good in soup, babies, as they will insist on trying to sink your croutons.

But Doccie's very right about you Mr. Nanas, and in your great leathery palms you hold my housewife's heart. So don't squeeze. Or sneeze!

I was told this is the best blog.
Unfortunately I couldn't read you post because the picture of the Queen of All Our Hearts made me well up. I'll come back after I've grieved a little more.

I liked Gorillas in the Mist by the way - that was some great acting.

I didn't star in that one, Kieran, although a relative of mine was once filmed wrestling Davy Attenborough.

Sam, you are my chicken, and I shall run to your rescue if that blackguard Colonel Sanders attempts to pluck your feathers.

My own true Nanas. I

If you believe the conspiracy theorists Charles had Di killed of so he could shag Camilla a bit more. Now he's married to her I wonder if there will be any more "mysterious" car "accidents"? There isn't a breathing good samaritain out there that would offer that old cow mouth to mouth, unless they were a monkey/ape used to kissing arse-faced creatures. Any takers? wink wink

Kissing is a strictly human disease, me old cock. Try shagging doggie style, next time, and it won't matter what your face looks like.