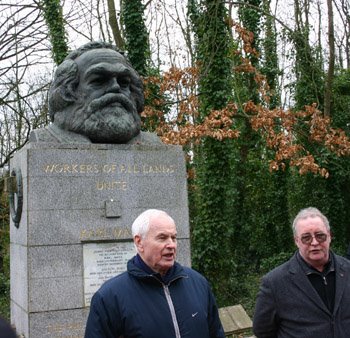 Comments:
Morning GB! Nice to read the posts you've written while I was away. There was a cute commie chick at my uni. I always thought it was such a waste that she gave all that passion and energy to a lost cause. She reminded me of a nun, in a way, but that may just be sour grapes on my part.

Shame it didn't work out for you. You'd've made a great stand-in for Brezhnev at their shindigs. I can just see you taking the salute as they all shuffle past with their moth-eaten banners...

"Our" shindigs, don't you mean, Ivan?
In my experience, Africans (human or otherwise) are not natural socialists. Too much rhythm and sense of fun.

It's well known that Karl Marx was part gorilla. His grandmother had an affair with one at Trier zoo.

It takes more than a beard and a German accent to make you part gorilla, Aunty. Marx clearly lacked our ability to socilise and get on with all types of human.

There's only one thing Communists are generally right about--who will end up on their enemies' list. It's a trivial prediction, but lethal nonetheless. Good thing you kicked out the fewllow before it was too late. Many a Western humanities professor could stand to learn form a clear-headed gorilla like you, GB.

The statue in that photo looks like Kelsey Grammer in X men 3!

My brief exeriences with communists happened at university in Glasgow where they had some stiff competition for the far left position in the firely red Scottish Socialist Party.

I learnt that joking of any sort was rowned upon, with any sort of humour at all being viewed suspiciously as some sort of a bourgois luxury or affectation.

I also learned that young male communists must not eat, sleep or shave very much in order to remain thin, pale and retain the air of being too busy for such trivial worldly cares as personal grooming (although not quite ready yet to squeeze out the full beard they covet).

They must also peer and sulk a lot, as if they've seen the dark soul of humanity and nobody will believe him about just how dark and awful we all truly are.

Conversely, the young female communists must be larger than their less extreme sistren, but also as ill-shaven. I think the young communist men like them that way.

Why things should be this way, I have no idea. I knew perfectly reasonable non-communist skinny men and large women at the time too, but there is no denying how young Glasgow communists broke down along these gender and appearance lines in the mid 90s.

You went to university in Glasgow,
Sam? That's a long way from home. It's funny how communists change appearance when they get into power. I think Desargues lived in a communist country, so he'll be able to confirm this.

They are, indeed, petty bourgeois at heart. Once they find themselves safely ensconced in the armchairs of political power, they get over their former inhibitions. Mid-level party apparatchiks start inquiring after French soap for their mistresses, and North Korean thugs develop a fondness for Courvoisier VSOP.

There's only one thing they can't bring themselves to get rid of: the ridiculous haircuts.

If frowning upon humour is a sign of latent Communism, what does that make America's liberal bien-pensants?