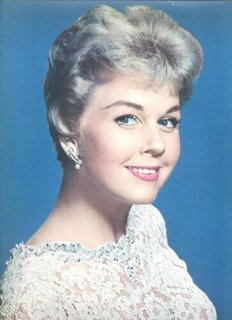 What ever happened to those wholesome, romantic movies that Hollywood used to make? The ones where the leading man was an eligible bachelor with a short haircut and the leading woman was a pure-hearted damsel who never smooched on the first date? The hero of the modern romantic comedy is a bumbling buffoon who’s terrified of making an ass of himself, while the object of his affection is typically a flirtatious tomboy who uses his semen as hair gel. Is it any wonder that the women of today complain that men don’t know how to woo them?

Doris Day was mockingly referred to as “America’s favourite virgin”, but where’s the shame in that? It’s surely far better than being “America’s haughtiest hussy” or “America’s fattest fishwife”, titles which would be difficult to award because of the fierce competition for them. In any case, there was a lot more to Miss Day’s career than playing the homespun maiden waiting for Mr Right. Let’s not forget all those wonderful songs, delivered in that soothing maternal voice, most of which were recorded before she was a virgin.

Miss Day will rightly be remembered for co-starring with Rock Hudson in those brilliant Hollywood farces. They were called “sex comedies” in their time, although there was precious little sex in them – indeed, the plots were full of ingenious complications to frustrate fulfilment of the carnal urge. Their enduring appeal lies in amusing dialogue rather than bedroom antics, with Doris playing the “straight man” in those sparkling comic exchanges. This was not something that Rock Hudson could do, of course. It was said that he got through the love scenes with Doris by fantasizing about Johnny Weissmuller.

Although married and a mother at the age of 17, Doris did not have a happy personal life. She divorced her first husband when still a teenager and later married a manipulative weasel who mismanaged her career, abused her son and squandered her fortune. On finding herself penniless on her husband’s death, she courageously embarked upon a TV career at the age of 44, starring in her own situation comedy. The show was a great success, no doubt helped by the fact that Doris was still a fine-looking woman in her forties, although perhaps a little sturdy around the neck and shoulders.

She later hosted her own chat show in which one of her first guests was an emaciated and terminally-ill Rock Hudson, whose sexual escapades were now public knowledge. Fearing an AIDS-related illness, Hudson’s doctor had asked him who his last sexual partner was. “I don’t have eyes in the back of my head,” replied Rock. It tells you a lot about Doris that she refused to believe he was sick with AIDS – or indeed was even gay – until after Hudson’s catamite had sued for a share of his estate. A lady never gossips about a man she has kissed on the lips – even if that man was holding his breath at the time.

As with a number of ageing actresses, Doris developed an affection for animals in her later years, setting up a foundation for their welfare. When her final marriage was dissolved in 1981, her ex-husband complained that she seemed to care more for her animal friends than him. I don’t see what point he was trying to make. Some of my best friends are animals, and I should imagine that all of them are a good deal more lovable than the sort of chap who marries a wealthy woman in her 50s. People should think before they make stupid and self-incriminatory remarks like that. 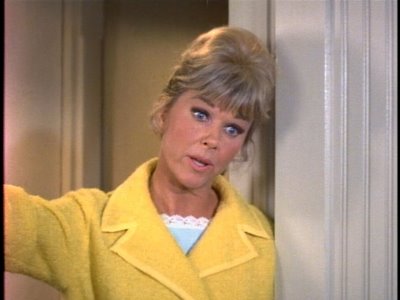 Comments:
Perhaps he thought she was getting too close to the mastiffs, GB - perhaps to the point of being able to steal Rock's classic line. After all, even weaselly gold-diggers have some standards, you know.

what lovely blog, GB, I thouroughly agree with you, where are the ladies of yesterday? seems they have been taken over by pimps, hardcore hags, and downright *itches. How sad. Isn't that waht made Audrey Hepburn and Julie Andrews so appealing? They were always ladies.

DD's still cutting about Carmel or some place. She's 80 odd now. There was romething on the radio about her.

Miss Redhead, your husband is one coooooool dude.

I only skimmed GB, I was moved by the headlines, I'm going back to absorb your pearls now.

She's still alive Dr, although her only son sadly died a few years ago. It's a pity she didn't have more children, like our fertile friend Ms Redhead.

In defence of Doris Day. I'm buying. Not to the point of adopting the hairdo, but I'm buying.

I'm fond of Audrey Hepburn too, not to mention Katharine, but personally my idol has always been Grace Kelly, except not dead, of course.

Carmen Miranda is my role model. However I would be a bit worried about someone nibbling my bananas.

Someone once said of Audrey Hepburn that other women adored her but men, while admiring her, couldn't really understand the fuss. I think it was Bill Maher or someone like that.

I fancy myself as cutting a bit of a Mary Poppins figure about my domicile, even down to some gentle chim chim cherooing with the pool-boy (the Californian equivalent of a 1910 Cockney sweep).

Doris Day? She was an annoying cow, but I'd still have shagged her.

The Beard returns. I get the impression Doris preferred clean cut men, but I could be wrong.

The world surely owes Doris a debt of gratitude for the historical accuracy of her "Calamity Jane". Calamity was well known for her well-lit renditions of "Take Me Back To The Black Hills Of Dakota" although "well-lit" meant something rather different to the hardscrabble denizens of Deadwood than Hollywood's no-shadows-anywhere interpretation.

Ingrid Bergman. Lauren Bacall. Carol Lombard. Rita Heyworth. Mae West! Plus Katherine Hepburn, already mentioned. So, sorry, just too many other fabulously beautiful - and feisty - women in the same pot. Doris was allowed so little depth and character, but she had talent, obviously. Julie Andrews, who could have been the next Doris Day, fared a little better. Female stereotyping is a strange thing.

I mean, Doris Day was sort of an adult Shirley Temple, no? Difficult to relate to.

Mae West, now there's a dame I admire. She didn't age very well, sadly, but she had some great lines in her prime - and wrote them herself. "It's not the men in my life, but the life in my men ..."

Wowie, f:lux -- you got almost my entire list of feisty femmes, except Garbo, Ida Lupino and Myrna Loy. Aah they don't make 'em like they used to... more's the pity.

Hasn't Britney Spears been through all those titles?

Looking for information and found it at this great site... »

A great site you have here i enjoyed reading all the comments,i think Doris day is a great icon,and she is actually 83 and helps run 2 animal foundations,she lives in carmel california.

Thanks for the laugh she is a great girl.