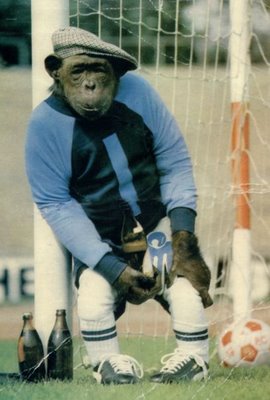 The satellite dishes of the world are currently trained on images of grown men running like hounds and kicking like mules. Sometimes they boot a leather ball; sometimes they boot each other; but never do they boot the referee. He’s clearly the most hated man on the pitch, so why does he always escape injury? Could it be that footballers, not being the smartest humans, don’t realise how vulnerable the ref is when his back is turned? Whatever the reason, it’s high time that one of these whistling busybodies caught a hot one in the seat of the pants.

Football, it seems, is a game of high and contrasting emotions. Players who grimace like gargoyles will later hug each other in rapture. Spectators who shake their fists in fury will later erupt in delirious ecstasy. At the end of the game one sees tearful virgins, sitting in the crowd with painted faces, seeking comfort in the arms of their chaperone. The coach of a losing team must sit before the nation’s press, with the face of a condemned man, making excuses for the failure of his players. And all, supposedly, in the cause of recreation.

I have only ever played football once. Smacker Ramrod (the circus vet) asked me to make up the numbers in an old boys’ reunion match against a rival public school. There were a few raised eyebrows from the opposition at my inclusion as goalkeeper, along with inevitable satirical remarks about whether King Kong would be playing right-back. But their smirks turned to frowns after the game started and I proceeded to catch all their shots with consummate ease. The other players in our side were clearly outclassed, never getting near the opposing goal, but as long as I was behind them the score stayed zero-zero.

In their frustration, our opponents tried a new tactic. Instead of shooting with their feet, they began to lob high balls into the goalmouth for their tallest players to strike with their heads, like cobras. This was obviously bad sportsmanship and against the spirit of game, which is called “football” rather than “headball”. But the referee brushed aside my complaints, while the “headers” became increasingly difficult to block at such close range. I then received some advice from my team mates: “Use your fists!” they said. So the next time a high ball appeared in front of me, I jumped into the air and punched the opposing centre-forward on the chin. The blow was a clean one and knocked the man as cold as a stoat.

I was immediately surrounded by irate members of the opposing team, who swore furiously without daring to lay a finger on me. I tried vainly to explain that I had been acting under instruction and looked to my team mates for moral support, but they only shook their heads in disappointment. Eventually, the referee broke through the huddle and took me to one side.

“Mr Referee,” I declared, “I am willing to apologize if I broke the rules, but this business of heading the ball is an underhand tactic which should be purged from the sport!”

“Broke the blooming rules!” exclaimed the referee. “You’ll be lucky if you’re not charged with assault!” He then removed a red card from his breast pocket and waved it in front of my nose. “Off!” he shouted, pointing towards the touchline.

It was beneath my dignity to argue with him, but I made a final statement for the record: “Your punishment for a first offence is harsh, Mr Referee – and especially so for a misdemeanour done in ignorance rather than malice.”

The referee awarded a penalty kick to our opponents. As an additional forfeit, he refused to allow a replacement goalkeeper until after the kick had been taken. The ball was passed into an empty net and the score remained one-zero until the final whistle.

After the game, I apologized to the opposing centre-forward, who having speedily been revived with a bucket of cold water appeared none the worse for his experience. He accepted my apology graciously and encouraged me to pursue a career as a professional goalkeeper.

“We’d never have got the ball past you!” he exclaimed. “You’d be the best goalie in the country if you learned how to deal with crosses. You’ve got to punch the ball instead of the player.”

“Thank you, my dear fellow, it’s most kind of you to say so,” I replied. “But I shall never play this vulgar sport again. The crosses I could bear, but the referee I could not. A man who exerts his authority by whistling and pointing is too much like a dog trainer for my liking. Moreover, a game played between congenial acquaintances requires no umpire. From now on I shall stick to backgammon.”

I gave the man my goalkeeper’s shirt as a souvenir and departed with Smacker for the circus.

Comforting a tearful virgin is the only reason I'd go to a football match. It's appalling having all this stuff going on during the cricket season. I like the idea of having a penalty kick with no goalkeeper, though. That referee was a master of the absurd.

Quite right too. Although now that Roy has departed soccer is in need of another great ape. Matt le Tisser not withstanding. But he is more of a gibbon.

I'm quite surprised that the ball made it through without accidentally being consumed by a wandering mote. Such a flaw in drifting vision with a suitcase to boot, what wouldn't I.

Oh how I laughed ... a bit difficult at the moment as I've lost my voice. Now if only you were European you could be the ladies' choice in our fantasy Euro squad. I think you qualify for a Belgian passport.

I'm sorry to hear you've lost your voice, Maam. If you were in the Congo, I'd recommend a mug of warm coconut milk with a dash of crocodile blood.

I'd welcome a croconut cocktail right about now. With an umbrella. And Rooney's head on a platter for being such a groin-squishing plonker. I don't like to scapegoat and am no expert in either football or the possession of testicles, but, really, ouchee and what a twit.

You are no patriot, sir. (I know you're Congolese, I'm referring to your cultural and educational alma mater). We could have done with you in goal last night. Poor Robinson just wasn't up to scratch.

Yes, I'm aware of yesterday's tragedy, Aunty. It's interesting how a girl from the Outer Hebrides has no problem in supporting the English, whereas the folk from Glasgow and Edinburgh were no doubt celebrating into the night. I expect Dr Maroon to put up a post titled 'A great day for Scotland'. I, of course, am neutral in these human squabbles.

I still maintain that the circular shape of and the interestingly contrasted black and white colors of the game play orb are the most singularly entertaining part of the whole football experience.

I have revealed your dirty secret, ape.

The mark of a true artist is someone who can cast new light on a mundane or overworked subject......GB, you are truly the dog's cojones....sublime post!

One of your best GB.

Who's the chimp in the red shirt? He looks like a hooligan.

He looks very human, doesn't he, Dr Joe? I believe he's an actor imitating a player who's just been fouled. I'm glad you liked the story, SB. I think you need to know a bit about football to appreciate it.

Have you tried rugby GB? the strength of your kind is greater than a humans and without the need for drug taking i for one would cheer you on.
Or how about wrestling? in thw WWF?

I don't know about rugby, Charlie. I've heard all kinds of foul deeds occur in those rucks and mauls. Wrestling, on the other hand, is something gorillas have been doing long before humans made a mockery of it.