Gorillas in the clergy 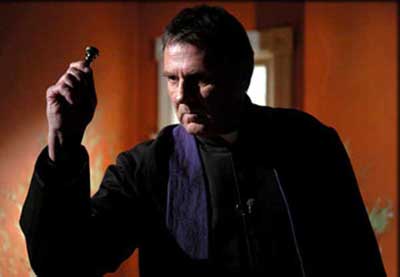 I hear that the followers of Jesus are deeply divided on whether to allow gays into the clergy. Strangely enough, it is Pope Benny Ratzinger who is most strongly opposed to the idea. It seems that Catholics take a perverse delight in excluding the very people who might enjoy dressing up in frocks and declaiming theatrically in Latin. As they have also banned people who have normal sex, it doesn’t really leave a big pool of potential recruits for the holy orders. By my reckoning, the choice is between paedophiles and people too ugly to mate. The paedophiles currently seem to have the upper hand.

I have long advocated opening up the priesthood to gorillas. I took an aptitude test when I was a young ape and the clergy came second only to the circus. Obviously, you have to be able to perform in public (as most gorillas can), but there’s something else of vital importance: a priest has got to be good at scaring people. The fallen woman in the confessional box won’t truly repent of her sins if her pastor is a wishy-washy character who wouldn’t say ‘boo’ to a goose. Nor would the pious folk who go to Mass every week have any confidence in his ability to protect them against evil spirits. A priest must be the kind of fellow who’ll head-butt the Devil with nothing more than a crucifix between his teeth and a bible in his back pocket. In my estimation, that’s either a crazy-eyed dude who’s into flagellation or a gorilla. The meek may inherit the Earth, but they’ve got no place in the Roman Catholic clergy.

This is not to say that I would actually accept ordination into the Catholic hierarchy. The clothes and the Latin might be attractive, but the avenues for artistic expression are far greater in the Protestant camp. Many of these modern sects have taken variety entertainment to new heights, encouraging their ministers to write their own comic monologues and lead the faithful in festivals of song and dance. No aspiring young performer could ask for a better audience than the congregations at these services. The only thing I’d worry about, as an artist, is whether it was my act or the spirit of the Lord that was making them smile. Having a receptive audience is all very well, but there’s not much kudos in getting laughs from a bunch of cheesy goofs who would think Cliff Richard was funny.

The best Protestant sects are the ones that encourage speaking in tongues. Only the ignorant deride this practice as talking gibberish, because it’s obvious that the words are full of meaning, even if the humans uttering them have no idea what it is. I have a deep respect for people who can babble away with grins on their faces without fearing the ridicule of the faithless mob. Anyone who lives next door to a parrot colony knows there’s nothing like a good chatter to lighten the soul and bring one closer to heaven. It’s essential, of course, that the ministers of these churches are well-tutored in the Earthly languages to avoid embarrassing themselves in remote regions of the globe. To assume that someone speaking Swahili is conversing in tongues would be the kind of faux pas that gives religion a bad name.
// posted by Gorilla Bananas @ 07:33

Comments:
GB me old ape, if you were my vicar I'd be off to church every week. I saw a documentary once where people were speaking in tongues, and they did it with their eyes closed and their hands up in the air. Very spooky. You've forgotten to post a picture.

As one who spent many many years in a number of Catholic Boarding school, may I just say that the addition of a great ape, such as yourself, would have made the whole experience much more interesting.

GB - If you were my local priest, I'd definitely return to religion.
Loved this post, it struck a great many chords as well as making me laugh out loud; and that's better medicine than any ol' snake oil salesman's tonic.

Hah! Evangelicals - they say they like speaking in tongues, but have just one tiny bout of Tourettes and suddenly you're in the doghouse! Hypocrites...

I think a really keen thing would be if the evangelicals who enjoy being bitten by snakes would talk to the snakes during sermons. Something like, "Well, then, Mr. Snake, how about a bite." To which the snake might respond "Sorry old thing, fresh out of venom!" That'd be swell!

I came to you via the Sheba blog. She is quite correct you are very talented, not to mention entertaining.
Read you again soon

I could have sworn I once met a clergyman who said he was a primate.

This is a very amusing joke despite its age.

GB, I do believe this is the funniest post I have read in a long time...

As for speaking in tongues, I went to a church that did that... plus the hands on healing and stuff. Believe me, sir - most (if not all) of them were just talking gibberish. You could see them looking out the corner of their eyes to see if they were being caught out!

"babble away with grins on their faces without fearing the ridicule of the faithless mob."

The perveyors of such oral diahrea really only engage in their practice within the safety zone of fellow supplicants. They'd probably be mortified to be called upon to perform in front of strangers.
So it is extremely convenient that Jesus never asks them to speak in tongues whilst outside church.

There would be a great amount of joy in seeing a gorilla preaching the word of God to an attentive audience. A great deal of fear too. When your local priest is one of the largest primates on the planet you WILL turn up to church on Sunday. Every Sunday. And there'd be absolute silence in the church at all times unlike most of the churches these days where the parishoners babble away constantly during the sermons. Try doing that when a silverback is reciting Revelations. He'd rip your figgin' arms out of their sockets.

Gorillas aren't that hot-tempered, Fatman. If people were talking in the pews, I would scowl and bare my teeth at them before taking harsher measures. Ripping off arms would be a last resort for the persistent offender.

Many apologies. What I should've said is that the gorilla priest could potentially rip a parishoner's arms off. A bit of scowling and chest thumping from a 165 kg ape would scare all but the most ignorant church-goer into silence.

"A priest must be the kind of fellow who’ll head-butt the Devil with nothing more than a crucifix between his teeth and a bible in his back pocket."

Do gorilla's come with back pockets? Are you a Lowland Gorilla, by any chance, Mr Nanas? I've heard they're quite the snappy dressers. My preference though has always been for a classic cut, 5-pocket ape - their cassocks lie much more nicely.

Welcome back, Sam. Yes, there's nothing quite like a multi-pocketed cassock for storing bibles and fruit in. They also allow air to circulate around the nether regions.

Let The Lord Jesus into your heart, GB.

You know it makes sense.