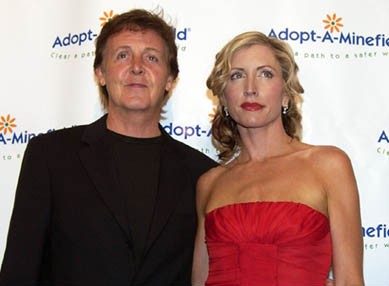 I wrote last month that I had asked Dr Whipsnade to invite Paul McCartney to spend some time with my clan in the Congo. I thought that a relaxing sojourn apart from Lady McCartney would refresh Sir Paul’s creative juices and calm his frayed nerves. Little did I expect that my well-intentioned suggestion would have such far-reaching consequences. In all innocence, I had no idea how strained things had become between Paul and Heather. In mitigation, I should point out that Dr Whipsnade went beyond his remit when he visited the McCartney residence. He has since briefed me on the events of that fateful afternoon.

Sir Paul graciously invited the good doctor into his drawing room where he introduced his attractive wife, who was tetchily thumbing through an issue of National Geographic. Dr Whipsnade began by informing the couple that he was acting as my agent.

“You know Gorilla Bananas!” exclaimed Sir Paul. “I always wanted to see that ape perform, but I didn’t want people pestering me inside a circus tent. Did you ever see his act, love?”

“Never heard of him,” replied Heather, not looking up from her magazine.

Dr Whipsnade then delivered my invitation, using his considerable tact to make it clearly understood that Sir Paul would be expected to arrive unaccompanied.

“It sounds brilliant!” chirped the ageing tunesmith, evidently thrilled at the prospect of a solo vacation. “I’ve always wanted to hang out with gorillas – they’re much more interesting than those seal pups we visited.”

But Heather ground her teeth and scowled at her spouse, giving vent to her feelings after he had spoken. “Only one night apart from Linda during a 30-year marriage, but when you’re with me you just can’t wait to piss off, can you?

At this point, Dr Whipsnade should have staged a tactical retreat and let the couple sort things out in private. But having swotted-up on the ex-Beatle’s career, he had come prepared with a number of apt suggestions, or so he thought. He pointed out that if Sir Paul returned to England on the eve of his 64th birthday, he might then serenade his lady wife with the words:

The author of these lyrics was delighted by the idea. “That’s great, that is!” he exclaimed. “We could invite the press round and get some good publicity about our marriage for a change.”

Heather, however, was less than enthusiastic about her role as the doting wife in the mooted media event. “If you sing that tripe at me, my answer will be: ‘No I bloody won’t!’” she hissed. “And who the hell is this Dr Whiplash, anyway, that you’re hanging on his every word! Just because he wears a suit and talks posh you think he’s some great impresario who can tell us what to do! I’ve seen pimps in Soho who’ve got more class than him!”

Never before had anyone associated Dr Whipsnade with a pimp, let alone compared him unfavourably to one. It was more than a man of his stature could endure with stoic reserve.

“Lady McCartney!” he huffed. “Like your husband, I am a self-made man who has prospered through the creativity of his mind and the honesty of his toil. Unlike your husband, I have a supportive wife who offers me either hearty encouragement or constructive criticism, as she sees fit. It appears to me that you have interpreted your marital vows in a highly unorthodox fashion, to say the least.”

Dr Whipsnade then gave Sir Paul his card before making his excuses and leaving in high dudgeon. On the way home, he made his chauffeur play the soundtrack of South Pacific to sooth his irritation. A few days later Sir Paul phoned him.

“Send my apologies to Mr Bananas because I won’t be able to visit him any time soon,” he said. “I’m having a bit of a domestic crisis at the moment which needs sorting.”

Dr Whipsnade said that he was sorry to hear of these difficulties and hoped that his recent visit had not aggravated them.

“Actually, I’m glad you came, Whippy,” replied Sir Paul. “Sometimes it takes a view from an outsider to make you realise what’s going wrong in your life.”

The rest, as they say, is tabloid headlines.

Comments:
Your mentor Whipsnade, has it exact.
What a talentless trollop, and her ‘designer’ clothes label is a total crock as well and her ‘perfume’ smells of garbage, almost as bad as the previous Mrs McCartney’s meatless sausages. I ask you, what’s the point of a meatless sausage? Her (Cathy’s) pictures were better than you’d expect, but she couldn’t play an instrument to save her life. It was embarrassing when she was on stage. Big Paul’s a self absorbed, monoventral, divvie anyway, I hope she cleans him out.
You and Whipsnade are well out of it. Trust me.

Morning GB, where have you been this week? It's not just tabloid headlines, there was even a long piece on why the marriage broke up in 'The Times'. Their theory was that Linda was the perfect wife for Paul, so Heather was bound to be a disappoinment. My theory is the kids broke it up. Would you believe McCartney has a step-daughter called Heather who's older than his wife? Very annoying for the kids to have a step-mum and a sister with the same name. I'd be pissed off for sure. Not sure who Cathy is, Doc Maroon. Was that Linda's nickname?

Aah the soothing sounds of South Pacific! No doubt it helped the situation. Bali Ha'i indeed -- maybe Sir Paul was high when he married whatshername...

I like how they're saying the media broke them up... because they're not used to attention... erm.

Heather Mills was a ball-buster from day one, but McCartney didn't realise it because all the women he ever shagged were groupies or hippy chicks. I never try to boss guys around unless we're in bed.

What's up with that "adopt a minefield" in the pic? You'd think Hopalong Heather would be a little less cavalier about leisure pursuits so fatal to feet. Or perhaps misery just loves company...

Paul is actually 73 this May.

Beth, how buxom are you? You don't have to answer that.