JFK and the Kama Sutra

Can watching a movie teach you about human history? It might do if the filmmaker can resist the temptation to make stuff up. I remember once seeing a film about President Kennedy, who is famous in the jungles of the Africa for sending chimpanzees into space. As an alpha male gorilla, I often use the president’s famous sayings to inspire my band. “Ask not what I can do for you, ask what you can do for me” is one of my favourites.

After seeing this movie, called JFK, I was seething with righteous anger. It appeared that the noble president had been gunned down by treacherous blackguards in the US government, who then framed a goof called Oswald for the murder. But when I complained to Dr Whipsnade about it, he told me that the film was complete poppycock. He said that the maker of JFK was a guy called Oliver Stoned who had spent most of the 1960s high on pot. Rather than tell the truth, Mr Stoned had invented a lot of hooey to make a bogus political point.

At first I was disinclined to believe Dr Whipsnade, whom I suspect of holding reactionary opinions on a variety of topics. But then I watched a BBC documentary which confirmed that the film was indeed full of falsehoods. Far from being a “patsy”, Oswald was an expert marksman with a history of violence and extremism. He also shot a policeman who had dared to ask him where he was when the president got his head blown off. All of which seems pretty damning to me.

At first, I put this episode down to one bad director who told lies because he was a pothead on a political vendetta. But then I went to another movie which suggested that filmmakers are constantly blurring the line between fact and fiction. It was called Kama Sutra: A Tale of Love, which I saw in a cinema with Ranjit Ram, the Indian knife-thrower. Ranjit hoped the film would teach me something about the history and culture of his country, but I must admit I was more interested in learning about human mating positions.

The first mating scene occurred early in the movie, as one would expect. But when the sultry servant girl wrapped her thighs around the prince, Ranjit stood up and started walking towards the aisle.

“I am going!” he announced angrily.

I naturally followed him out of courtesy, which provoked a fair amount of hissing and muttering from the people whose view I was blocking. When we arrived at the exit, Ranjit turned around and made the following defiant proclamation:

“This film you are watching has NOTHING to do with India!”

We then made a hasty exist amid a groundswell of shushing and cursing from the exasperated audience.

After we had left the cinema, Ranjit explained what had upset him. It was not the mating scene, as such, but the fact that the seduction had occurred on the day of the prince’s wedding. The idea that an Indian of noble birth would debase himself in this fashion before his betrothal to a princess struck him as a monstrous lie, and a slur on all things Indian. He said he was going to picket the cinema on the next showing of the movie, and I agreed to join him out of a sense of solidarity and loyalty. He made a sign for himself saying “DON’T WATCH THIS FALSE FILM”, while I agreed wear to sandwich boards with the words “AN INDIAN WEDDING IS NOT A JOKE” on one side and “AN INDIAN PRINCE IS NOT A GOAT” on the other.

As luck would have it, a journalist from a local newspaper had come to see the film and briefly asked Ranjit a few questions with his notebook in hand. When the journalist suggested that movie directors should be allowed a bit of artistic licence to make their films more interesting, Ranjit replied:

“Showing one nonsense after another is not art! Filmmakers who insult our history must learn we are not accepting these bullshits quietly!”

You’ve got to admit he has a point. 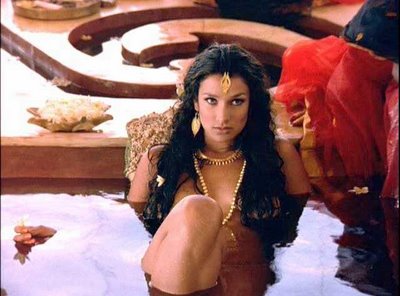 Comments:
I read somewhere that the leading actors in the new Da Vinci Code film have had to have special talks and coaching to promote the film as a work of fiction. I like a good conspiracy theory as much as the next galoot but you have to feel for the poor old gardeners at the various church sites mentioned in the novel. They'd just got their lawns reseeded and their daffies looking nice again after the stampede to their churches that the novel caused. Looks like it's going to happen again when the film is released. I'd volunteer or the silver-cleaning rota instead if I were a smart parishioner in an affected church.

I never bothered to see JFK, but I've seen that Kama Sutra film on TV. As far as I'm concerned, Ghandi himself would have been seduced by that servant girl, wedding day or not. Thanks for the picture of her, GB. The film was far more revealing.

Fortunately, very few people in these enlightened times are cursed with any knowledge of their own history. Comprehensive education is quite possibly the only thing in existence that is less informative than a Hollywood pap-fest. Ollie Stone can keep turning the crank on his cameras with perfect impunity...

People are idiots. Even sane people. 'I believe it.' My friend said recently about the d'vinci bloomin' code. I swear...goes away mummbling furiously.

ah but, to tell the big lies, you tell the little truths first.

I saw that film on TV too. It was quite good.

You’re not doing me a favour by going there. Just think yourself lucky its there to go to.

You might want to save that sort of remark for your girlfriend, Kel, but I guess we know what you mean.

Feel free to post your own thoughts on any topics discussed over here. We'd all love to know where you stand on the Kama Sutra and the Da Vinci code.

hehehe ~ GB, GB, ever the encourager... give a man a rope..... I admit, I may have underestimated your slyness quotient, GB.

As to the media, I would have to agree with Dr M, ~
"ah but, to tell the big lies, you tell the little truths first."

and isn't the media ( any media, doesn't matter the nationality or cause) defined by those little pearls of wisdom? Afterall, information is power, and the controllers of said information know it, and deal in it, and make darned good money, too. Not sure how they can look at themselves in the mirror, but they do make good money.

There's a lot of flesh on your site of late, GB. Not that I'm complaining, mind, but I do wonder if you aren't flirting with a shaving fetish.

I tried to watch the Kama Sutra film once but Mrs Dr McC caught me er, in the act, gave me a slap and turned off the television. Why do women do this?

I'm glad you think I'm sly, Ms Red. I'm going to dress up as a fox just for your sake.

I think Indian women are lovely. All the ones I've met are lovely, and alot are very beautiful. It seems unfair to them that they have to marry Indian men, who by and large seem to be nasty pieces of work and quite unnatractive. There are exeptions of course.

Right. They should've centered the movie on the social injustice of the backward caste system instead.
It would be far more fun to watch a couple untouchables going the nasty.
Indian snobs should eat their curry.